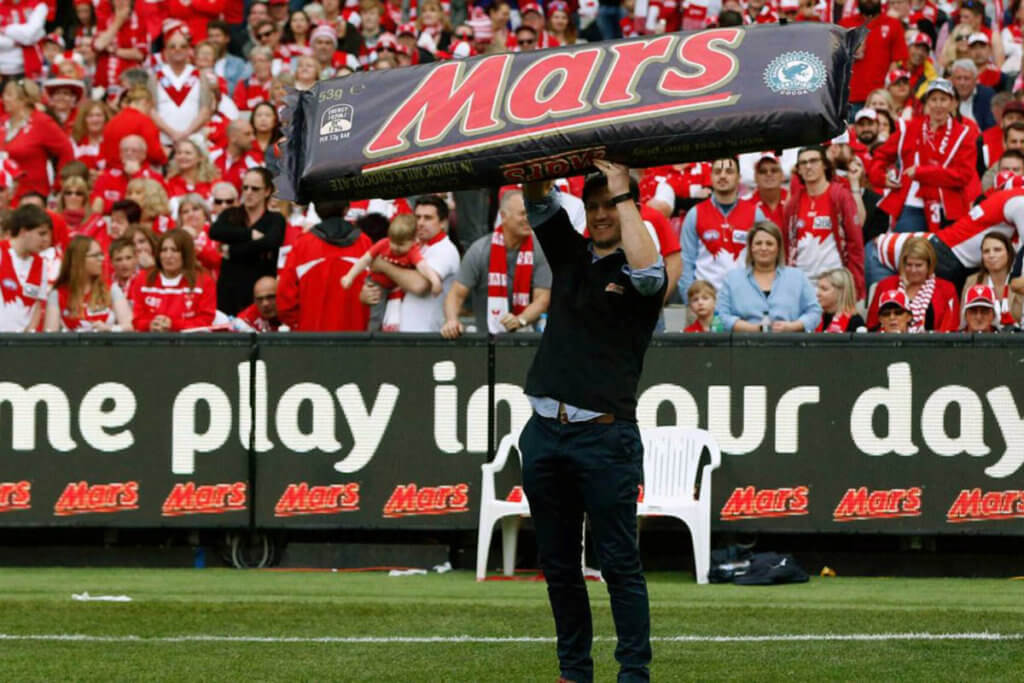 Everyone understands the value of advertising, so when we teamed up with one of the biggest brands on the planet, we knew we had to come up with something impressive!

We were approached by Twenty3 Group, an advertising and sponsorship agency who represent Mars Australia. The brand was launching a whole new advertising campaign and wanted to commission Inflatable Anything to produce an advertising inflatable that would form part of this new campaign.

Getting it right for such a big client was crucial to our team at Inflatable Anything and we couldn’t wait to sink our teeth into such a tasty challenge!

On This Page:
1 Nailing the Brief
2 Putting Some Play Into Your Day
3 Need Something to Sink Your Teeth Into?

We had lengthy discussions with the Twenty3 Group to make sure that we had a comprehensive understanding of the brief.

The challenge was to produce a number of replica Mars Bars to promote the brand during half time shows at large sporting events throughout Australia, with particular emphasis on cricket, one of Australia’s most popular sports.

The idea was for people to walk around the event holding the advertising inflatable whilst throwing out free Mars Bars into the crowds.

Mars Bars are one of the most iconic and easily recognisable products in Australia, so we had to make sure that we reproduced the look of a Mars Bar exactly for the whole world to notice!

The technical brief came with some complications, with both the shape and size of the advertising inflatable creating a real challenge for our designers. In the end, we were able to deliver the goods. Using the outer wrapper from an actual Mars Bar as our starting point, we were able to come up with a prototype design that we presented to the client.

Due to the shape of the bar being rectangular rather than round, this created an immediate factor to address in terms of ensuring the advertising inflatable kept its shape. The way air moves under pressure means that it always wants to be round, so producing inflatables in shapes other than circles or balls, can prove to be complicated. With years of experience making inflatables with similar requirements, we soon came up with a solution.

It was decided to use a double layer for the advertising inflatable to hide what is known as the ‘pillowing’ effect, where the inflatable can appear dimpled. By using an inner bladder and an outer sleeve, this created a double skin which made for a more realistic appearance for the finished article.

An additional benefit was that the outer sleeve of the advertising inflatable is interchangeable, so it could be used on multiple occasions and for varying designs, giving the product even greater longevity.

Having resolved any issues over the overall shape of the advertising inflatable, the next challenge for our designers was to get the design as close as possible to the original product. It wasn’t just a question of replicating the front of the iconic bar. We had to make sure that it looked exactly the same as the chocolate bar wrapper from all angles; the front, sides, and back.

The wording and logo also had to be 100% accurate and this is where being able to use the latest digital printing was a real advantage for us at Inflatable Anything. We have always been at the cutting edge of technology, so using the most state of the art production processes meant that we were able to offer the most accurate replication of the branding as possible.

Putting Some Play Into Your Day

Getting the logo and branding bang on was absolutely crucial to the success of this project, and so we were very relieved when the client happily signed off the design. Now we had the go ahead, we started the production process straight away to make sure the Twenty3 Group were able to deliver the advertising inflatable to the team at Mars Bar on time and on budget.

In a matter of weeks, we took delivery of the hugely anticipated advertising inflatable. Before we handed them over to the client, we made sure we went through the same rigorous quality checks that we do with all our inflatables.

We checked the uniformity of each advertising inflatable to make sure they were all exactly the same. Then we checked the overall look of them to make sure the branding had been reproduced exactly how the client wanted it and finally, we did a technical check ensuring the dual layer technique we had gone for, worked in reality. At 1.8 meters in length, the giant replica Mars Bar had real visual impact. We couldn’t have been more pleased with the final result and the client absolutely loved it too.

The advertising inflatable Mars Bars proved highly effective in the client’s campaign – and incredibly practical too taking just two minutes to inflate! We were delighted to be part of an advertising campaign of such an iconic product. Plus, it was a great excuse to eat a lot of chocolate – all in the name of research of course!

Need Something to Sink Your Teeth Into?

Whether you have a basic idea brewing, or perhaps you don't have any just yet, our team of experts are more than happy to brainstorm concepts with you to bring your next event to life. Contact us today!