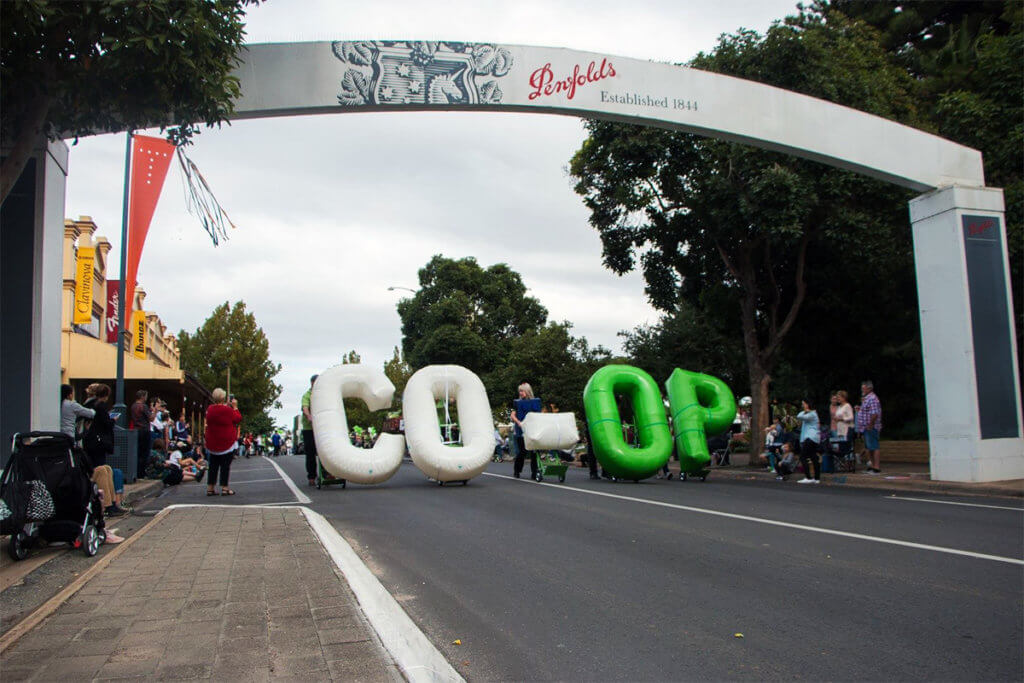 The Barossa Co-op is owned by its members, who work to support the growth of the local economy, and we were honoured to have them reach out to us for some custom giant inflatable letters to use at local events. The first events being The Barossa Co-op birthday celebrations and the Barossa Vintage Festival Parade, which attract the local community and are also extremely popular with the tourists. We knew instantly this was something we could make amazing for the Barossa Co-op.

Upon our initial conversation, we learnt that Barossa Co-op wanted giant inflatable letters to use during upcoming local events, with continued use at other future events or opportunities to spread the word of their organisation. The letters would spell the word “CO-OP” in capital letters to capture the crowd of onlookers’ attention and create interest to learn more about the Barossa Co-op.

The client also emphasized the need for the giant inflatable letters to be mobile, as they wanted them to be carried down the street during one of the events, namely the Barossa Vintage Festival Parade. This is important to note, as not only the size is important, but the material being used. More on that in the production section!

To kick off the design, we put our thinking caps on as to how we were going to not only meet the brief, but exceed expectations! We knew to keep true to the Barossa Co-op’s branding, so we stuck to their branding colours white and green. Knowing that the giant inflatable letters were going to be used at a variety of different events: sometimes set up and left, other times being walked down the street as part of a parade, so we knew the size we had to get right.

Barossa Co-op were thrilled with the 2D concept, so we created the 3D renders of the giant inflatable letters showcasing the letters from different perspectives. The 3D renders were approved with great delight, meaning we got to work bringing the vision to life!

Our production team exceeded all expectations with the quality of their work. The giant inflatable letters were made from stock colour PVC, which meant no printing was necessary for this particular project. It sped up the manufacturing process as we only needed to cut the raw material and sew them together to make the final product. Choosing to use stock PVC instead of printed PVC also ensured the durability of the giant inflatable letters. As the Barossa Co-op had planned to use these giant inflatable letters at many future events, it was important to make sure the letters appearance would not be affected by scratches caused by normal wear and tear.

The giant inflatable letters were designed as sealed air inflatables which only needed a pump to inflate them at the time of set up. After the initial setup, they could be sealed and carried around without being connected to a constant power source.

Prior to its delivery to the client in New South Wales, Australia, the giant inflatable letters underwent quality control testing. Once we set up the letters at our office and made certain every detail was perfect, the unit was en route to the Barossa Co-op.

The Barossa Vintage Festival was not complete without the spectacular parade, with a special addition that year of Barrossa Co-ops giant inflatable letters! In the past six years since the letters were commissioned, the Barossa Co-op had used them in a number of events and they’re still thrilled with them today. More than 60 floats participated in the parade in 2019 as the Barossa community celebrated their innovation and their heritage, and we were honoured to assist Barossa Co-op to take part in such an important tradition.

Have a Giant Inflatable Letter Idea?

We want to hear all about it! The possibilities we can create are endless at Inflatable Anything, we love bringing your imagination to life. Reach out to us and let’s get those creative ideas flowing today!