Inflatable Anything™
/
Products
/
Custom Made Inflatable Photo Wall for ECU 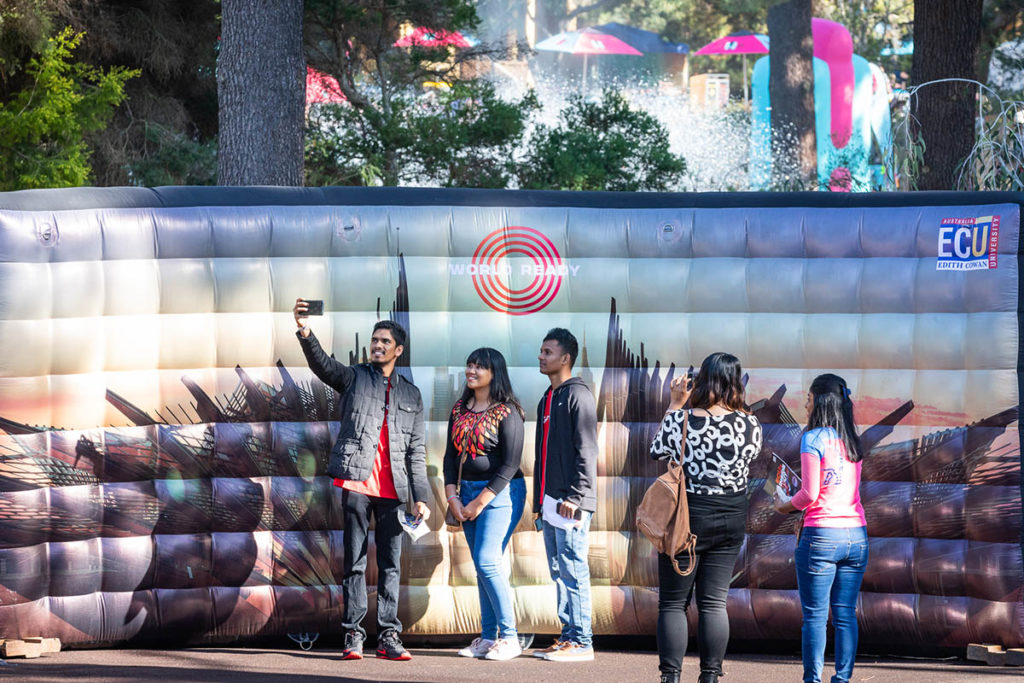 Edith Cowan University is one of the largest and most renowned universities located in Western Australia. Their marketing team contacted us looking for a custom made inflatable photo wall to advertise their World Ready Campaign, a reflection of their growing world class research outputs and reputation.

For their annual Open Days, they were struggling to find a consistent and effective approach to set up for their events. We discussed using something that was simple to install and could be used both indoors and outdoors when the weather was not suitable.

The idea of a blow up photo wall was being thrown around, though after using alternatives to these in the past, the need for something with a much bigger “Wow-Factor” was needed. The motive behind the image printed depicts the “start of their journey at ECU, and beyond.

They contacted us to discuss options available, including size, print limitations and things leave ease of setup. After a short conversation, it was clear an inflatable media wall solution would not only be perfect to fill the space, but also provide a large enough background for larger group photos, with the ability to re-use it for future O-weeks and events.

To start with, all we had was the graphics provided to us by the team at ECU. With the dimensions of their potential sites confirmed, we locked in a size of 5.18m x 2.5m finished dimensions, with a surface dimension of 6m, accounting for the curve in the wall for stability.

Due to the nature of air rounding out inflatables, it is sometimes difficult to get a “flat” surface, as the front and back faces try to separate as the inflatable expands. To make this blow up photo wall sit correctly and not lose shape, internal tethers were going to be required. One compromise is that it appears to have a “pillow” effect. The team at ECU understood this, though had one final request.

As this idea was fleshed out, the thought about using this for a wider range of events was brought up, of which some ran during early evening or at night. Being made from polyester, this lent itself well to being internally illuminated via LED lighting. This was added to the brief and confirmations were arranged. Due to the straightforward design process, no 3D design was required, saving time overall.

With the final checks of dimensions and the curvature being confirmed to give the unit the stability it needed, we moved to generate final confirmation documents for ECU to sign off on. The confirmations included print type (CMYK), a flat version of the artwork scaled to 6m, as well as a top down shot of the construction showing finished dimensions. We also provided examples of the “pillowing effect”, so there were no surprises. With the Open Day just weeks away, the Team at ECU reviewed the design and approved the construction of the blow up photo wall and we got to work.

Construction of the Custom Made Inflatable Photo Wall

Before we knew it, the Production Team had completed the unit and was already doing the final checks. Due to the nature of every custom inflatable being a little bit different, we always test every inflatable to ensure the blowers efficiency, and that they do not over-pressurise the inflatable.

The Team at ECU got their wall 5 working days prior to the Open Day event, giving them time to have a practice run through, setting and packing the inflatable media wall up and down; this is something we always recommend to do so you are not scrambling on the morning of the event wondering, “How do I do this?”

The Inflatable Media Wall in Action

The great thing about a custom made inflatable photo wall is that it provides multiple photo opportunities, making it an unforgettable experience for many event attendees. Such an impact is what many companies and organisations dream to achieve.

So was the event a success? From seeing all the user photos shared online, we believe it speaks for itself.

There are many different ways we could have achieved a custom made inflatable photo wall, and the beauty of it is there is no right or wrong way, it is all about what works for you! We have developed many custom inflatables and deliver things just like the blow up photo wall Australia wide. If you would like to discuss designs and pricing, feel free to get in touch with our team of experts today.