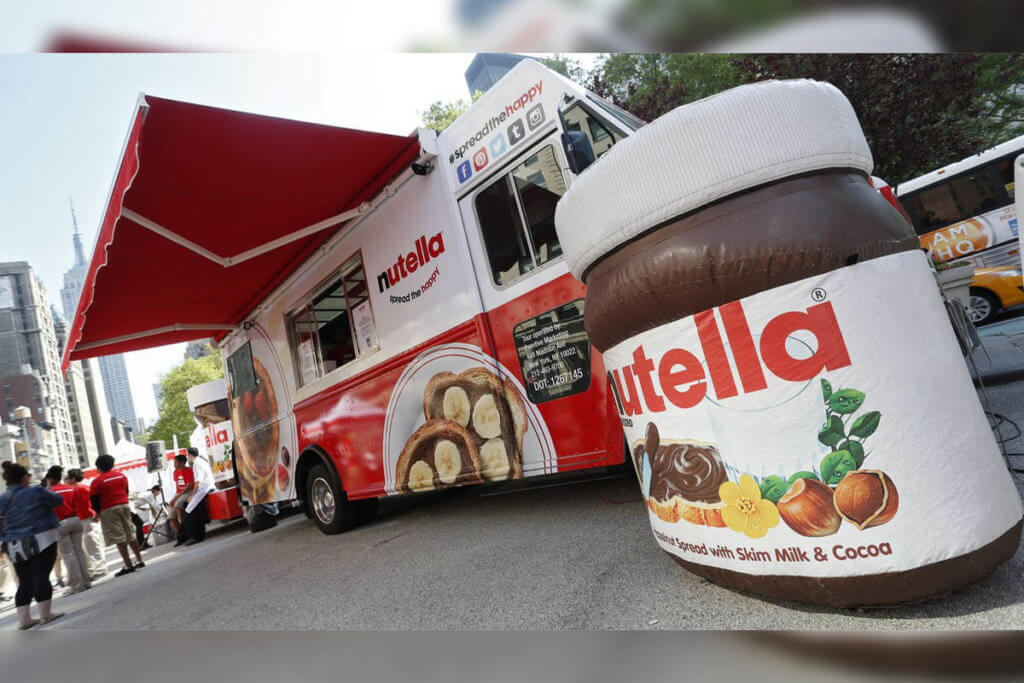 Who doesn’t love Nutella? Our team certainly do – like most people they can’t get enough of this delicious hazelnut and chocolate spread. So when we were approached by Ferrero Australia, with a great concept for a custom printed inflatable, we were intrigued and excited.

To support a promotion they were running, the client wanted us to create, not one, but three giant inflatable Nutella jars, to use at promotions in shopping centres across Australia. They wanted the jars to appear in Melbourne, Sydney, and Brisbane.

They had decided to go for inflatables rather than solid replicas because they were:

We wasted no time in getting further details from the client, to ensure that we’d understand all their priorities and our first designs would be a close approximation to the final product.

One thing that was clear: their number one priority was that the inflatable Nutella jar should look exactly like the real thing, not just an approximation.

It was this visual accuracy that would ensure the jars would make a fantastic impact and attract people to the Nutella stand.

On This Page:
1 Getting to work on the custom printed inflatables
2 The Shape Had To Be Right
3 Bringing The Inflatable To Life

Getting to work on the custom printed inflatables

To ensure they were able to be used in a variety of environments, we proposed a height of 2m. This would be big enough to ensure a wow factor for kids, and guarantee a smile from adults.

Given the limited time the Nutella team had to set up in different locations, the jars had to be quick and easy to inflate. They accepted our recommendation of using a constant air blower construction method, and we integrated the blower inside each jar for quick and easy use. This could just be plugged in, switched on and the jars would inflate themselves.

As soon as the overall dimensions and inflation method were agreed, our designers got down to work on getting the details right.

The Shape Had To Be Right

The obvious starting point was a jar of Nutella.  They took measurements, and then scaled them up to ensure the correct proportions were maintained.

Ferrero supplied us with the artwork for the label, so the custom printed inflatable jars would be absolutely identical in design to a real jar.

As soon as the 2D drawings had been approved by the client, the design was passed to our team who used 3D CAD software to create detailed, full-colour renderings.

This is the point in the process when the client sees their concept come to life, and the excitement really starts to build.

The 3D images allow the object to be viewed from every angle, so if anything doesn’t look as good when it’s seen from 360 degrees, any modifications can be made at this point.

With the clients delighted and the final ‘go-ahead’ given, the custom printed inflatable jar project was passed to our manufacturing team.

Bringing The Inflatable To Life

Before the full printing started, colour swatches were produced to ensure the print colours matched, not only the label on the custom printed inflatable jars, but crucially, the exact colour of Nutella spread! A shade too dark, or too light, and the public would not have been impressed! But our team, with their unrivalled in-depth knowledge of Nutella, did what it took to get this vital detail right.

Every shade of the print colour was perfect, the fabric was printed and machine cut. Following this, the seam of each jar was stitched to create the final shape, and the blowers enclosed inside.

That is never the end of the process though. Nothing leaves our facility without going through detailed quality checks.  Each custom printed inflatable jar was inflated to check that the shape was exactly what had been requested. Seams were double checked for strength. The blowers were put through their paces to measure exactly how long each one would take to inflate.

It’s unusual to have three identical inflatables, and although they were to be used in different locations, we also checked that they would look identical when displayed side by side.

The three inflatable Nutella jars looked great together. If there had been even the slightest deviation from the design signed off by the client, we would have let them know.

It’s rare, and any difference will be almost imperceptible, but it can happen. However, as we expected the inflatable Nutella jars conformed to the specification perfectly.

Once our team was satisfied, it was time to ship the inflatable Nutella jars. The client agreed that they looked fantastic, and were delighted that their concept had turned into reality. They’ve since been doing a great job, creating a buzz wherever they appear and attract people towards them like a magnet.