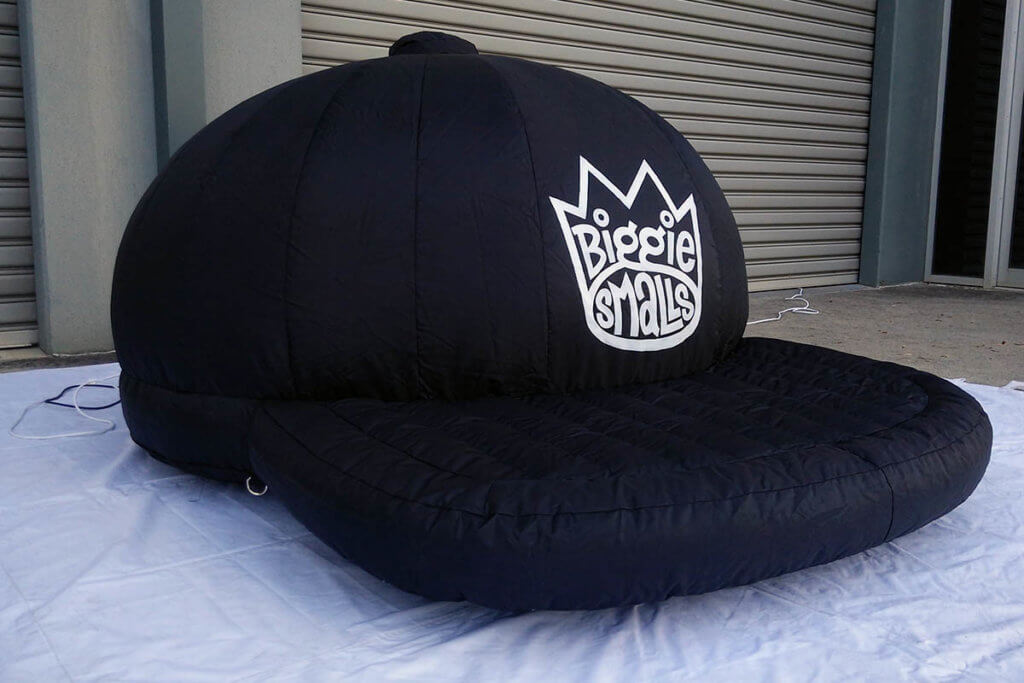 Our exceptional giant inflatable hat’s journey began with the Laneway Group coming into contact with Inflatable Anything on behalf of their client, Biggie Smalls.

Biggie Smalls, one of the leading foods and events brands in Melbourne, was looking to add a unique detail to their food truck in an upcoming festival. They wanted to turn an existing cap design into a giant inflatable hat to be placed above the top of the food truck, which would undoubtedly spice up their food truck’s appearance and create a destination for festival goers.

This was an incredibly tight deadline, with only two weeks until the festival, the client was in a bit of a rush, we were confident we could produce and deliver in time - it’s a credit to both parties for our stellar communication, and design and manufacturing teams.  Anything is possible at Inflatable Anything—it’s literally in our name!

For this project, the Biggie Smalls hat was chosen to represent the trademark during the festival as it was a distinctive part of the client’s brand identity.

From years of experience in designing giant inflatables based on real objects, we knew it was simplest to begin with a physical example. The Laneway Group provided us with a black hat, and we took the necessary measurements of the hat to use in the design. Creating a replica meant that we needed the finished product to look as close as possible to the original, therefore we also took note of the finer details: the bill of the hat and the button at the top were included in the design to give the giant inflatable hat an extra dose of authenticity.

The concept of the unit was finalized through discussion between our team and the client, and we carried on with bringing the inflatable replica to life.

The computerized 3D drawings helped us visualize the giant inflatable hat prior to its manufacturing. The hat was designed to be 2 m long from the bill to the back panel, 1.5 m wide across the bill, and 0.94 m high from the base to the top of the button. Since the client wanted to place the inflatable on top of the food truck’s roof, the giant inflatable hat was constructed to have a flat base as a safety consideration. It would make the unit easier to secure on the roof to ensure that festival day would go ahead without a hitch for Biggie Smalls.

It was difficult for us not to feel excited to start the production process—we couldn’t wait to see how the giant inflatable hat would take shape based on the design approved by the client.

The Production Of The Giant Inflatable Hat

The time constraint presented a challenge to our manufacturing team, especially because the giant inflatable hat required some complex stitching to be done. However, thanks to our team’s hard work and attention to detail, everything was manufactured to precision and we cut and sewed fabrics accurately within the deadline. The end result was an amazing replica of the Biggie Smalls black giant inflatable hat!

To make certain everything was up to par, we checked the quality of the inflatable at our factory before it was shipped to the client. The hat looked marvellous and we sent it on its way, excited to have the client see the outcome.

The Giant Inflatable Hat In Use

The client received the giant inflatable hat the day before the festival, and just as we expected, they were absolutely thrilled with how alike the inflatable was to the original hat. Another feature they commended us on was how quick and hassle-free the setup process was; the internal blower attached to the inflatable had it ready for action in under three minutes. Once secured to the roof, the giant inflatable hat left a powerful visual impact on those who came across the food truck like no other marketing tool could have.

InflatableAnything is Ready to Serve!

All ideas are welcome at Inflatable Anything, no matter how grand or intricate. Reach out to our team today! We’re more than happy to give you an overview of the process of creating bespoke inflatables.