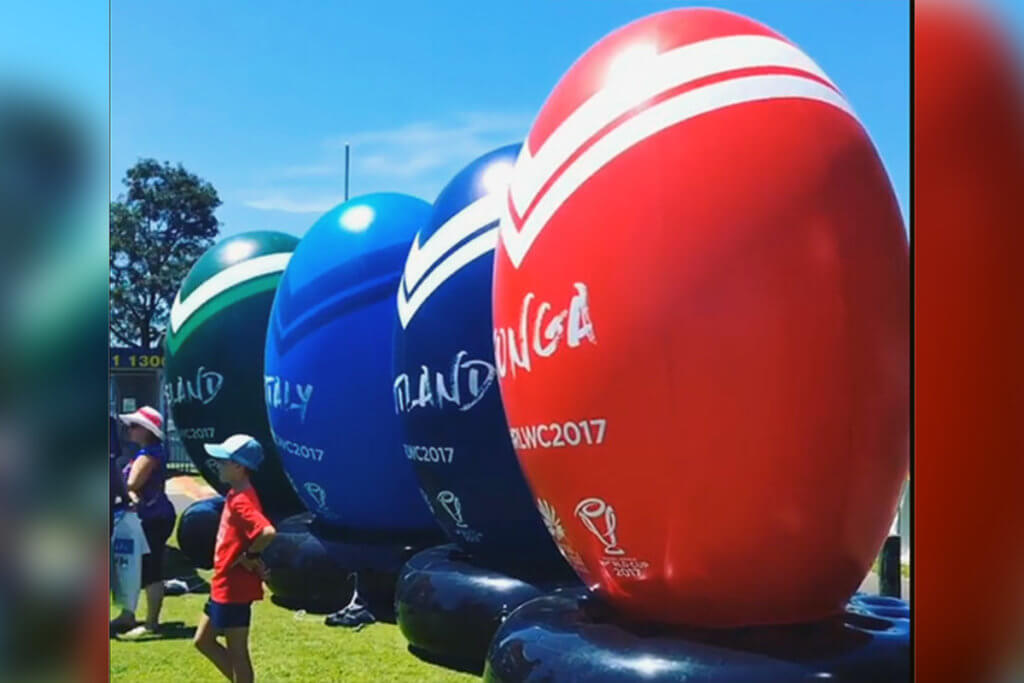 We’ve worked extensively with Cairns Regional Council over the years and when they were thinking of getting some giant inflatable rugby balls made for the 2017 Rugby World Cup, they knew who to call — us!

The brief was pretty straight forward; at the upcoming Rugby World Cup there was an area that was to be used for activations that children would do rugby related activities in and they wanted to have a high impact display that would really communicate the message of “Rugby World Cup”, creating a social media buzz and at the same time, providing memorable photo opportunities for the attendees.

The final concept that was agreed upon was giant inflatable rugby balls with bases so they could stand upright. Each ball would be printed with a different design, representing the teams that were attending the cup.

So, What Was the Plan?

Each team was to have it’s own rugby ball that was going to be printed specific to that team.

The ball would be in the colours of the team, along with a hashtag for social media and the logos of the C.R.C and World Cup.

This was the template of the artwork for the Scottish team. The artwork was going to be the same on both the front and the back of the balls, and there would be six balls in total - one for each team.

Turning a Custom Inflatable Concept Into a Workable Design

Now that the artwork for each of the balls had been designed and agreed upon, the next step here was to turn that design into a 3D computer generated object with the artwork applied to it.

The 3D design step is important for the manufacture of custom inflatables because it allows the client to see exactly what the final product is going to look like.

The first step is to design the shape itself, and then once the shape is accepted, the artwork is applied to the shape.

In this case, there were six different inflatable rugby balls being made, five that were specific to each team, and one that was generic for the event.

This means that even though the same “ball” would be used for each of them, the artwork had to be applied to each as that was actually what was being used for the cutting and assembly of the product.

Once the design was accepted and the shape was agreed upon, it was time for our manufacturing team to get going on bringing these inflatable rugby balls to life.

The first step was to turn the 3D design into a 2D sheet that could be printed, and then cut. This process doesn’t take long, as it is calculated by a computer which then outputs all the printing that is required.

Once those files were sent to our printer and printed, they were then brought back to our factory for final cutting and assembly.

As mentioned, the balls were delivered ahead of schedule for the client giving them enough time to test the balls before the event to ensure they knew exactly how to use them when the event actually started.

We always recommend to clients to use their inflatables before their events because it allows them time to get familiar with their operation, set up, tie down, etc.

This meant that when the world cup started, the council was able to easily set up the balls at the site and start getting that great exposure and impact they were looking for.

The inflatable rugby balls were set up for a total of 5 days for the duration of the event. After the event we received great feedback from the client that the balls were a great hit and everyone loved them, and they also garnered  a lot of social media attention, giving them to get exposure that they would not have otherwise received.

We are always excited when we have completed a new project, and we are just as excited by the prospect of a new custom inflatable concept. If you are looking for ideas to attract more attention to your brand for your next event, speak to our friendly team today!