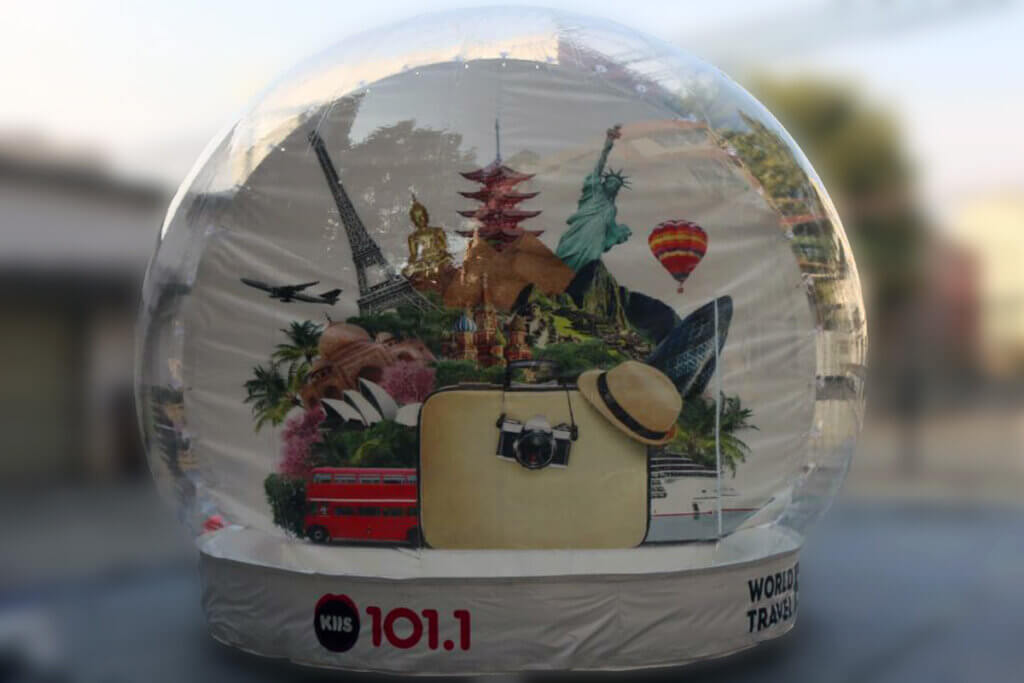 Why in the world would a giant inflatable snow globe be just south of the Yarra River, in a convention centre, in the first few days of February?

Prime time radio station KIIS FM planned on holding an activation event at the Melbourne stop of the World Travel Expo, and they wanted a snow globe that could be walked into, with a themed backdrop, for photo opportunities. This giant inflatable snow globe, while ultimately promoting the event, was to be used largely as a tool to further brand recognition for the radio station.

This project was very unique and seemed like quite the challenge. Our team here at Inflatable Anything couldn’t wait to take a whack at it!

On This Page:
1 A Change of Surroundings
2 Around the World
3 Yet Still Staying Grounded
4 Splash of Colour
5 Final Boarding Call
6 Bringing it home

A Change of Surroundings

From the get-go, there were a lot of things we had to take into consideration to make this giant inflatable snow globe work. It presented an obstacle first and foremost, of course, because this project does not exactly call for a traditional inflatable. However, the client knew how experienced we were at working with certain materials, and hoped that we could figure out a way to make it happen.

Since this unit was supposed to be made to have people inside it, the structure of the globe had to be sound. The last thing we wanted was for a family to enter through the zipper on the side and go home with happy memories of a giant inflatable snow globe collapsing in on them. After a bunch of trial and error, we finally found a way to keep the globe stable.

Polyvinyl chloride, or PVC, is one of the most versatile industrial materials there is. It’s also extremely durable and resistant to things like puncture, weathering, and chemical damage. For the globe structure, we decided this would be the best choice, secured to the ground with D rings. However, even this was a bit more flimsy than what we were expecting. We ended up constructing a small metal frame to which to form the giant inflatable snow globe and achieve a nice, round, and stable shape.

The intense problem solving didn’t end there though!

Now that we had the basics of the giant inflatable snow globe structure sorted out, we realized we couldn’t even consider it secure without looking down. Again, typically, we aren’t exactly equipped for that sort of thing, but that’s never stopped us before. With our expertise of manipulating the material to fit our purposes, we again used PVC for the globe base. Our team worked with the material to produce a thick slab that held everything in place. Overall, the giant inflatable snow globe measured up to 3.9 meters tall.

When it came to the overall design of this giant inflatable snow globe, at least as it pertains to activation events, there were 2 main elements with which we needed to concern ourselves. The client wanted the ability to rebrand the giant inflatable snow globe from the start, which wasn’t at all difficult to do since it just involved switching out banners on the base of the globe.

What we needed to work through was how to apply a backdrop to the unit that can easily be switched out for different events. We decided to print a custom banner and attach it bit by bit to the inside of the PVC globe using several clear D rings so as not to take focus away from the themed image.

Before we could call this project a success, there was one more thing we had to account for.

Even though the material is generally safe and can’t harm anyone at the levels found in most construction, PVC has a quality that can potentially be a bit of a disadvantage. At high enough temperatures and in enclosed spaces, PVC can do what is called outgassing. Plastics, like polyvinyl chloride, can give off trace amounts of volatile organic chemicals, usually through odours.

In this case, it was very unlikely that the continuous blower would produce enough heat to even come close to causing any outgassing, but in such an enclosed space, and with so much of it, we really preferred not to even risk it. The health and safety of the attendees is much more important than rushing an order through to quality control, so the giant inflatable snow globe was delivered with a carbon dioxide detector.

With all of the precautions we had to take, unfortunately we were not able to deliver the unit in time for the Melbourne Expo, but our client at KIIS FM was very pleased with the amount of care we took tending to every detail. The giant inflatable snow globe rebranded and safely made it to plenty of other activation events, most recently for the Australian Football League Women’s Western Bulldogs.

When Inflatable Anything says it works tirelessly to meet every need of our clients, we really mean it. Contact our team today to bring any fantastical idea you may have to life!