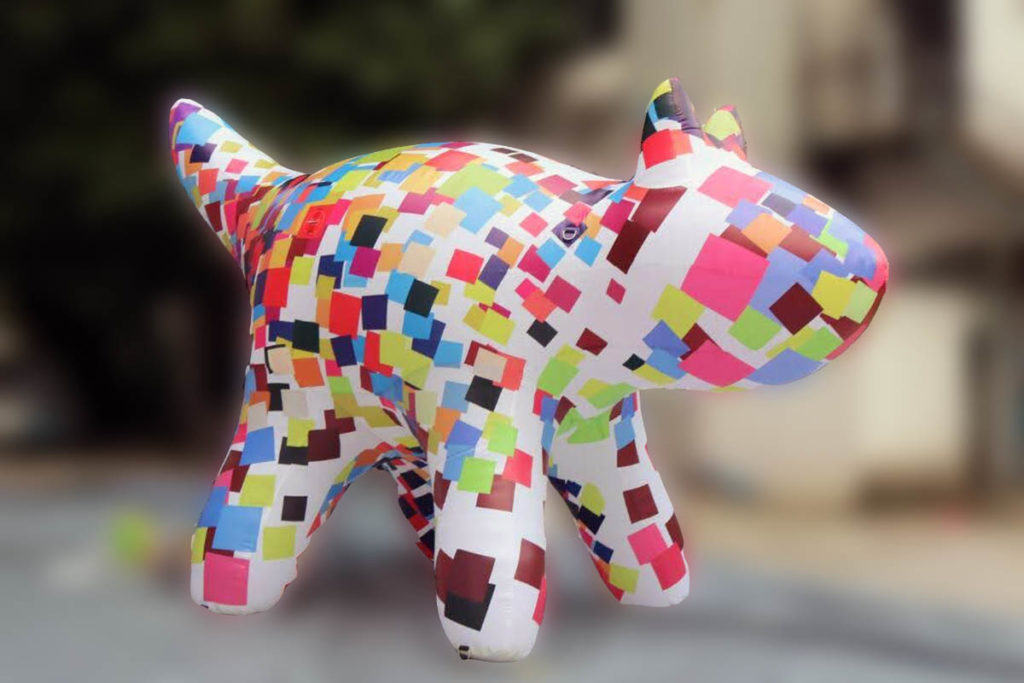 We were yet again approached by Wyndham City Council to work together with them on a new event inflatable project.

The project was a collaborative effort of the council and a local artist who had passed away, so the idea was to develop it from photos of a smaller sculptural work he made. The inflatable art sculpture was to be used at a special event to celebrate the artist’s life and completed works.

One interesting challenge was that we had to recreate the tail, as the original sculpture’s tail had been partially damaged previously.

Anyway, once again, we got cracking on another great project.

Getting the Basics Right

This project started off with a small scale art sculpture that was created by the late artist.

The sculpture was made from clay and hand-painted. Being such an invaluable custom piece, we had to work from photos and build the 3D shape around the model and colours in the images we were supplied.

We received a good selection of photos of the camp dog, with photos from all directions to give us a great idea of what the final shape should look like.

The great thing about creating this inflatable art sculpture was that it lent itself really well to being inflatable because it was crafted into a smooth-surfaced, rounded off shape. Inflatables naturally tend to round out due to air pressure causing the material to expand.

Once we received all the different photos, we started on modelling the shape itself and focused on the artwork at a later stage. The first priority was just to get the general shape right, including the rebuilt tail, and only after that was approved we would move into the next phase which was to create the artwork.

Our 3D designer spent quite a bit of time here to try to get the shape as true to life as possible, to respect the work of the artist.

After some revisions, we were able to lock down what the shape of the customised inflatable camp dog would be and the client went ahead and approved it.

The next step was to design the artwork, and align it onto the 3D model.

We used the photos of the physical sculpture to inspire us for the surface printing, and then went ahead and applied that pattern to the customised inflatable camp dog

Now that the shape and the surface printing had been approved, the next step in the process was to start moving on the manufacturing of the inflatable art sculpture.

Our expert team was ready to get going and we went ahead and started the manufacturing. The first step was to print the fabric according to the pattern that was output from the 3D model.

Once the material was all printed, we moved to the cutting phase and cut the unit to shape ready to pass onto the sewing team to assemble the final product.

The team jumped on this job as soon as it landed with them as they wanted to make sure that we had plenty of time to get this project perfect due to the important role it was to play to commemorate the artist. Safe to say, we had no issues finishing the project and then preparing it for shipping to the customer.

We are always manufacturing several inflatables at the same time and our team has extensive experience in working with highly customised inflatables.

As is typical with us, we finished the project ahead of schedule which gave us plenty of time to do some testing on the unit and ensure it was in 110% working order for the client when they received it.

This unit was particularly simple to use as it was a constant power unit so all that was required by the customer was to connect it to the blower, and turn it on, and it would basically just inflate itself.

This client did opt for an engineering certificate, a “Regulation 126”, where the engineer specifies what types of weight is required to install the unit in a safe manner according to the building code of Australia. This is an optional offering for an event inflatable and is generally is supplied when the event organisers request it specifically.

We’re very proud to have worked on such a meaningful project with Wyndham City, and we look forward to the next project!

If you have any ideas for a customised event inflatable, no matter how crazy, contact us today to get started on pricing and artwork.