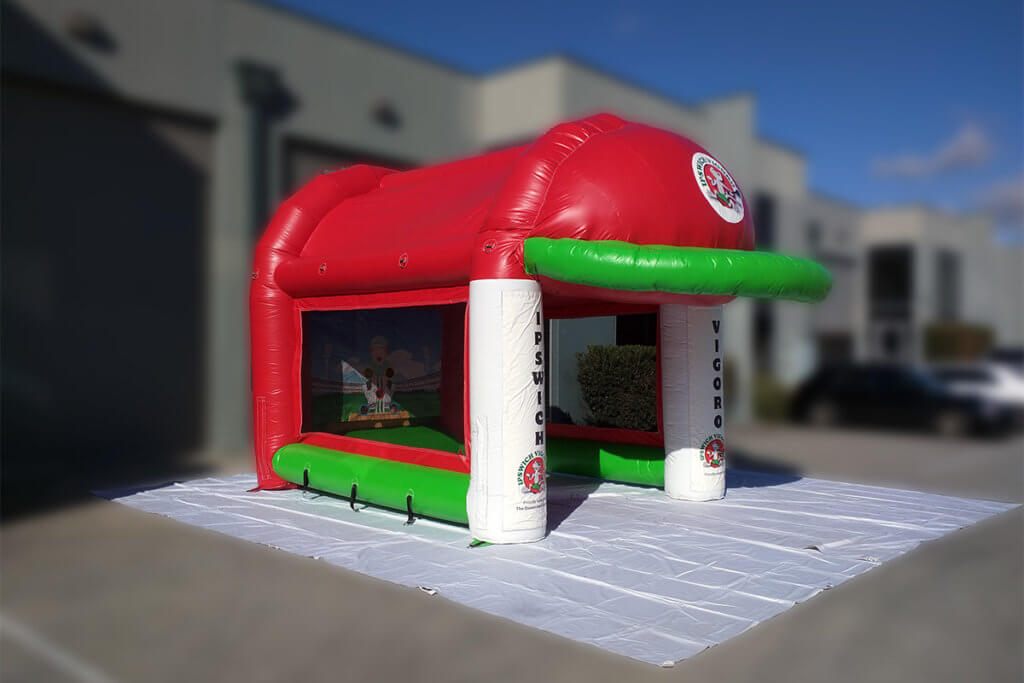 Customised inflatable batting tunnels are super engaging and one of the best investments to make in sports marketing today. Ipswich Vigoro’s attention had already been captured by several online images of batting nets before they approached us to create something unique and eye-catching for them.

They wanted an inflatable batting tunnel that would promote their sport by getting people actively involved at carnivals and promotion days to be held in Queensland, Australia.

On This Page:
1 Making wishes come true
2 Going with the flow
3 Mix and Match
4 Up to speed
5 Gear Up Your Game

After initial discussions to get as much detail as possible about a client’s concept, the usual next step in our process of creating a custom inflatable is the design and artwork. Ipswich Vigoro was able to give us an image of an inflatable batting tunnel they had seen on the internet as an initial starting point, as well as some hand-drawn sketches.

This illustrated wish-list was useful in identifying some of the most important customisable details of their inflatable batting tunnel, including their ideas for a cap-shaped awning, a cricket-themed end wall and drop-down target wall, as well as the preferred positioning of their name and logo. From these preliminary images we were able to create a 3-D model that showed the full dimensions of the 3m wide, 2.7m high and 6m deep tunnel.

As the client wanted their inflatable batting tunnel to reflect their brand-specific colours of red, white and green, we also used 3-D modelling to assign these colours to various parts of the structure.

Going with the flow

Unlike inflatables that are used for decoration and show, an inflatable batting net or tunnel has more interactive purposes. For this reason, we needed to ensure that the client’s inflatable batting tunnel would stand securely, hold its shape well, and that the materials used were robust enough to handle the activity.

An inflatable batting tunnel is a focused game space. A participant stands at the entrance facing into the tunnel towards the drop-down target wall. They use a club or bat to hit a ball towards the target wall, aiming to get the ball into the holes that are visible. If the ball goes through a hole, it drops down behind the target wall where it is retrieved and returned to the player.

An important consideration in the design of this inflatable batting tunnel was health and safety. Since the inflatable would be set up in an outdoor space, and participants would be active inside it, the sides of the tunnel were made of mesh netting to allow proper air flow.

One of our top priorities at Inflatable Anything is to respect our client’s budget and offer ways for them to maximise the value of their custom inflatable. In this case, by printing the company name and logo onto removable banners that attach to the main structure with Velcro, we offered our client the opportunity for extended use of their inflatable. Even if Ipswich Vigoro were changed in the future, they would still be able to use their inflatable batting tunnel for grabbing the attention of participants at events. This was also the motivation for a detachable target wall, making it easy for our client to print and attach newly themed ones to match the needs of future events.

We have plenty of quality checks built-in throughout the design and manufacturing process, but the final quality control always takes place when the completed inflatable is set up at our facilities for the first time and we can breathe a sigh of relief as it ticks all the boxes. One of the boxes we like our inflatables to tick is ease of use and speed of set up.

This lightweight inflatable batting tunnel made us all smile when we were able to set it up in 10 minutes because we know that when a client is setting up for a promotional event, the last thing they need is something that is heavy, clumsy, and takes forever to install!

Gear Up Your Game

Eye-catching and engaging products like an inflatable batting tunnel are perfect for sports promotion and marketing. They can be fully customised to reflect branding titles, logos, colours, and images ensuring that your company stands head and shoulders above the rest. Give us a call and let’s get cracking on creating your ideal sporting inflatable.