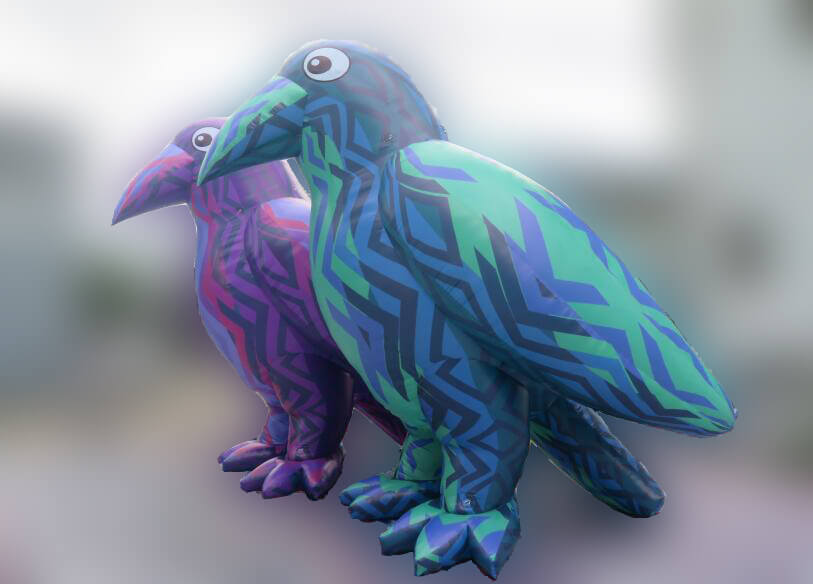 Another year and another project on the cards with Wyndham City Council. Previously we had completed some very creative and artistic jobs like the Inflatable Camp Dog and Inflatable Babushka Dolls for them, and so true to form this inflatable bird was promising to be very unique and colourful.

We started here with a drawing of Waa The Protector, a character based on Australian Aboriginal legends and stories. There were actually two variants of Waa, with one being green and one being purple. This meant that there was different artwork for each bird, but in terms of the scale, shape, and design, they were the same.

These inflatable Australian characters were to be used at an upcoming event and to be set up outdoors and illuminated with external lighting; very similar to the Babushka Dolls.

On This Page:
1 Going Up a Dimension
1.1 Digitally Creating the Inflatable Bird
1.2 Colourful Custom Printed Inflatables
2 Assembly Starts and Finishes
3 The Inflatable Australian Characters in Action
3.1 Some Feedback From the Client

Going Up a Dimension

We were supplied some flat drawings of Waa, originally without any colouring, but later with colouring added over the top of the drawing.

This inflatable bird project was slightly more complex that other jobs we had done previously for multiple reasons, namingly being:

Nonetheless, this project was one we knew we could shine with and we agreed to work with the council to complete their project.

After the order was approved and we received the purchase order, our 3D design jumped on this job right away to start to create the 3D shape of the bird.

As with all projects, these are bespoke custom printed inflatables and each time we start a new job, we actually need to create the shapes from scratch to meet the client brief. We don’t have any “off the shelf” designs that we can refer to, rather, we create each design as it’s own.

The most important part is to get the shape, size, and general feeling of the project correct, and then after that we work to apply the colour and printing on the surface to really bring the unit to life.

Our designer spent some considerable time getting this project right, and in the end the client was happy with the shape and agreed to proceed to the next stage of the design process without many revisions required.

This project was a little more complex than usual to apply the colours to the object.

In the 2D design, the colours were applied to a flat forward perspective of the inflatable bird, and actually went across multiple parts of the bird including the head, chest, legs, and wings. For this reason, we had to use some discretion during the design to ensure that not only we met the brief which was to replicate the design, but to also ensure that the final inflatable bird would look good when in a real life replication of the drawing.

Our designer took care to ensure that the way the art was applied to the object made sense, and they had to make some decisions along the way to ensure that it looked great.

In the end, we think the colouring looked fantastic, and both birds were printed in the same manner, but just had certain colours swapped out between the two of them. The client was also happy with the design, and so signed off on the project to start manufacturing.

The inflatable bird project now moved into the manufacturing phase.

We set ourselves a strict deadline with this project because it was required for an upcoming event, and being the centrepiece of the event, without them the event would definitely be lacking something; we didn’t want to let our client down.

Our team pressed ahead and did their magic by printing the artwork, cutting the pattern, and then assembling the custom printed inflatables into their final shape, including all the required tie down points and internal structuring to make sure they resemble the original designs as close as possible.

We were very satisfied with the outcome of the manufacturing and after our extensive quality control and review process, the birds were packed up and ready to send to the client well ahead of schedule for their event. We definitely like to ensure that the inflatables are not one of the major things our clients need to stress about for their upcoming events, so we make working with us as easy and as seamless as possible.

The Inflatable Australian Characters in Action

The custom printed inflatables were dispatched by courier to our client to receive well ahead of their event.

They arrived to the client ahead of the event which gave them plenty of time to prepare the area of where the two birds were to be used.

The birds were used at the event and it went off without a hitch.

Some Feedback From the Client

Some feedback we did receive from our client was that these custom printed inflatables were a little more unstable than the dolls or dog they had previously purchased, and we did agree with them. As with all our projects, each project is a “first” and effectively a prototype because that particular inflatable has never been made.

For this reason, the “real world” behaviour of inflatables cannot genuinely be known until after the unit is actually manufactured. Any shape can be created on a computer, but until that shape is actually made and tested in the real world, we cannot be sure of anything.

In the case of the inflatable bird, it was simply solved by adding a few extra ropes to help the birds stand and they were still fit to use, and the client now becoming quite familiar with the nature of inflatables, was very understanding and found it to be a reasonable solution.

We get excited by new project prospects, so if getting some custom printed inflatables is an option you are considering, speak to our experienced team today! We want to make sure you have everything you need to make an informed decision, and open up your mind to the wonderful world of inflatables.