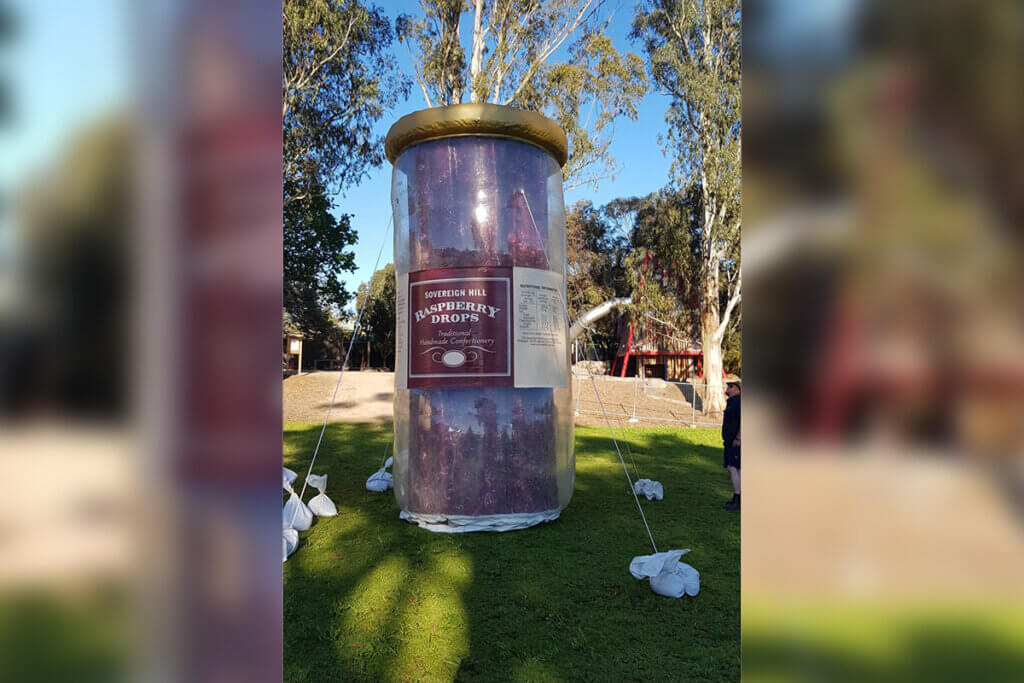 When you think of Disneyland, what pops into your head? Probably mouse ears, yeah? What about Macca’s? We’re betting you think of the golden ‘M.’ Good branding can associate a particular business with an everyday, mundane object. This is what Sovereign Hill Museums Association was hoping to do when they asked for an inflatable candy jar replica from Inflatable Anything.

As a very popular gold rush-themed tourist destination in Victoria complete with an 1850s schoolhouse featuring pupils and a confectionery featuring original equipment, Sovereign Hill was asked to host a promotional media event on their grounds. To help build this association in Aussie’s minds, they wanted Inflatable Anything to construct this inflatable candy jar replica based off of one of their best-selling lollies, the hard boiled raspberry drops.

We love helping businesses build their identity in our own little way; even better when it’s meant to attract more tourism and give a nice boost to the Australian economy!

For this particular project, as mentioned, the client wanted a product replica of one of their best-sellers. Though our process for large replica items is usually a bit more labour-intensive these days, they insisted on a design so realistic it could be easily mistaken for the real thing. The marketing team wanted a multi-layered, clear jar with a lid, raspberry drops (or a high-resolution picture of them) inside, obviously all wrapped with the label.

Our reference material for creating this inflatable candy jar replica was both the product and, since the multiple layers were a bit of a novelty for us, a client sketch of exactly what they hoped for. With the media event in the rear view mirror, we had no time to lose!

From the client drawing, we were able to render up a quick 3D model to follow. However, without exact dimensions for the project, we really had to rely on our own judgment when it came to constructing this inflatable candy jar replica. But isn’t that exactly why people come to us in the first place? Putting their trust in Inflatable Anything to sort out these details obviously paid off, because we got the greenlight to move forward with manufacturing almost right away.

Even though polyvinyl chloride is the only material that can successfully be used to make a clear inflatable anyway, it does have some qualities that made it the superior choice for this project.  Standing at almost 6 meters with a width to scale, this inflatable candy jar replica was expected to last, and PVC is the most durable option we offer.

Secondly, Sovereign Hill is an open-air museum, so the polymer was best in that regard too due to its capacity to resist the elements.

Thirdly, the client did not want the burden of having to deal with a noisy external blower, so we treated this unit similarly to how we construct our inflatable balls, which can be inflated and sealed off.  For even more strength, and to achieve this sealed-off effect for such a large structure, we ended up using heat to fuse together the seams of the polyvinyl chloride panels, a solution that is really only possible on a 100% PVC unit.

After finishing the inflatable candy jar replica, subjecting it to vigorous quality control protocols, and shipping it to the fictional town, there were somehow still a few days until the event. However, it was fairly lucky that we had to use the welding process to achieve what Sovereign Hill wanted, because there was a mishap during setup where the inflatable got damaged due to dragging on a rough surface. Welded seams, though they rarely come undone in the first place, are extremely easy to repair in comparison to glued seams, even out in the field. You just have to have the right equipment.

Our repair of the inflatable candy jar replica lead to it featuring as a focal point during many, many more promotional media events over the years. In fact, we created the replica in the year 2013, and the same inflatable has been used by the tourist destination as recently as early 2020! It’s safe to say we had quite the happy client.

Here at Inflatable Anything, we enthusiastically bring your ideas to life, even if it’s just from a 2D rough sketch. Contact our experienced team of professionals today to see just how far we’ll go to rouse yours!