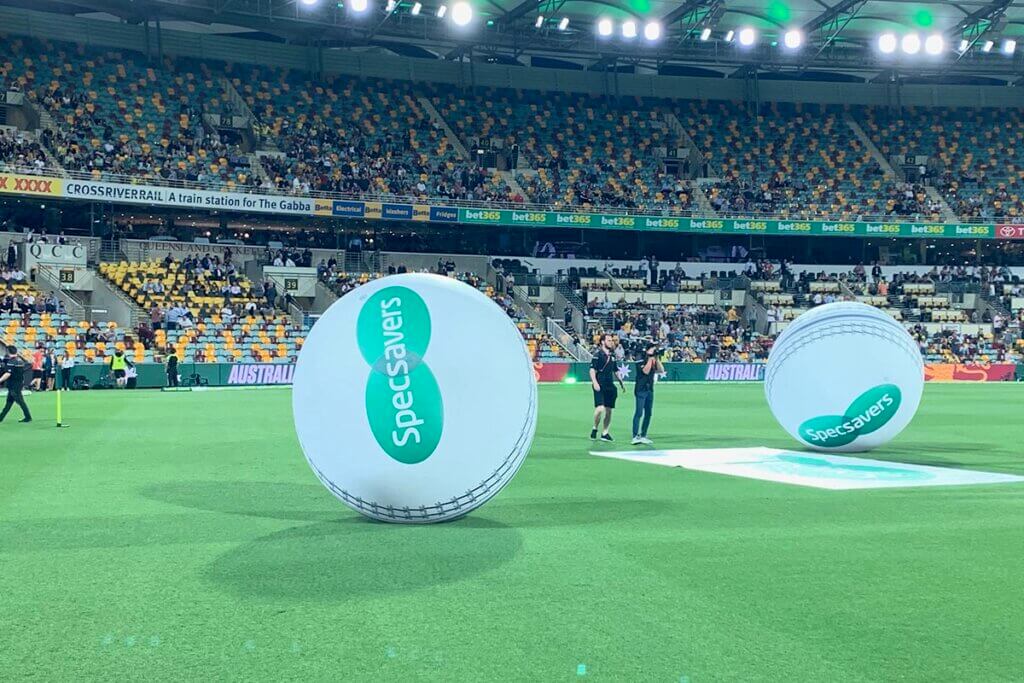 To engage crowds both in a direct and indirect way, some leagues break up the main matches by putting on games for fans to participate in. Twenty3 Group hoped to do the same at stadium cricket games while also advertising their client’s service, so they commissioned inflatable cricket balls.

For this particular game, they planned to have participants on 2 teams try to get their ball to the opposite end of the ground before the other team.

We here at Inflatable Anything have partnered with these marketers’ clients on previous brand activations, and we have always been thrilled with the results. We could not wait to collaborate again on these inflatable cricket balls!

On This Page:
1 Friendly, Fun Concept
2 Bringing the Balls to Life
3 A Secure Foundation
4 Putting Them to the Test

The plan for these units was quite simple and familiar. The balls were really just meant to be large replicas with the client’s logo centred on each side, however unlike past similar projects the shapes were to be completely smoothed over, with no hindrances, for example, like D rings. The replicas were meant to function as big sports balls that would be reused over and over for different instances for interactive, energising games.

In this game, participants were to roll and pass the inflatable cricket balls down the stadium pitch as fast as they could. Therefore to ensure fairness, the perfectly round shape for each sealed off inflatable was quite imperative.

Bringing the Balls to Life

The 2 balls the client commissioned were to have a straightforward design. The cricket balls themselves were to measure 2.5 metres in diameter and would mostly be plain white, which luckily was a standard and easily-obtained colour of the constructing material. On the surface of these inflatable cricket balls was to be stitching consistent with the real deals, which barely took effort. The part we really had to focus on in this project was the logo.

With Specsavers' artwork in hand, and outfitted with top of the line equipment at our factory, all we had to do was feed the image into our computer assisted design software, on which we were able to modify and size up or size down the image as needed. We could also from there estimate the dimensions that would best serve this project.

In our business, we always use our expertise to ensure every client receives the very best solutions for their unit anyway, but it’s especially important when a good chunk of your marketing strategy comes from connecting a brand or logo with a desire in consumer’s minds. We used a full print, meaning laying down the whole branding and image at once. Since we can only achieve that method on a digital printer, that zeroed in on other options too, like using the four process CMYK inks. Thankfully this matching method works quite well for most logos.

Since the inflatable cricket balls had to be able to last at least through a few rounds of games, one of our top priorities was durability. However, the functionality of needing to be able to move it around freely sealed the deal on material selection.

Polyester and PVC are both surprisingly durable on their own. The latter can be both manipulated in a way that makes it even stronger and ensures convenience, though. Welding polyvinyl chloride panels together can be thought of as heating plastic, letting it melt, and allowing 2 ends of the material of the inflatable cricket balls to dry and deeply bond together on a molecular level. By welding the panels together, because of PVC’s tensile strength, the air held within the inflatable will stay put for at least a few hours without risk of deflating. To further directly serve this project, PVC is also very lightweight and portable, and the polymer holds onto a round shape perfectly.

Putting Them to the Test

The deadline for these inflatable cricket balls was already extremely tight from the beginning, so while the project went from design approval to quality control in a flash, we still had to send out the units on an express same day delivery service. While we don’t typically have to rush out products quite so soon, it was a nice and exciting change for us to go from construction straight to receiving images of the inflatables in action.

We here at Inflatable Anything have been passionate about assisting businesses in creating memorable experiences for their prospective customers the past 15 years, and that zeal just intensifies with each new project. Contact our team of professionals today!