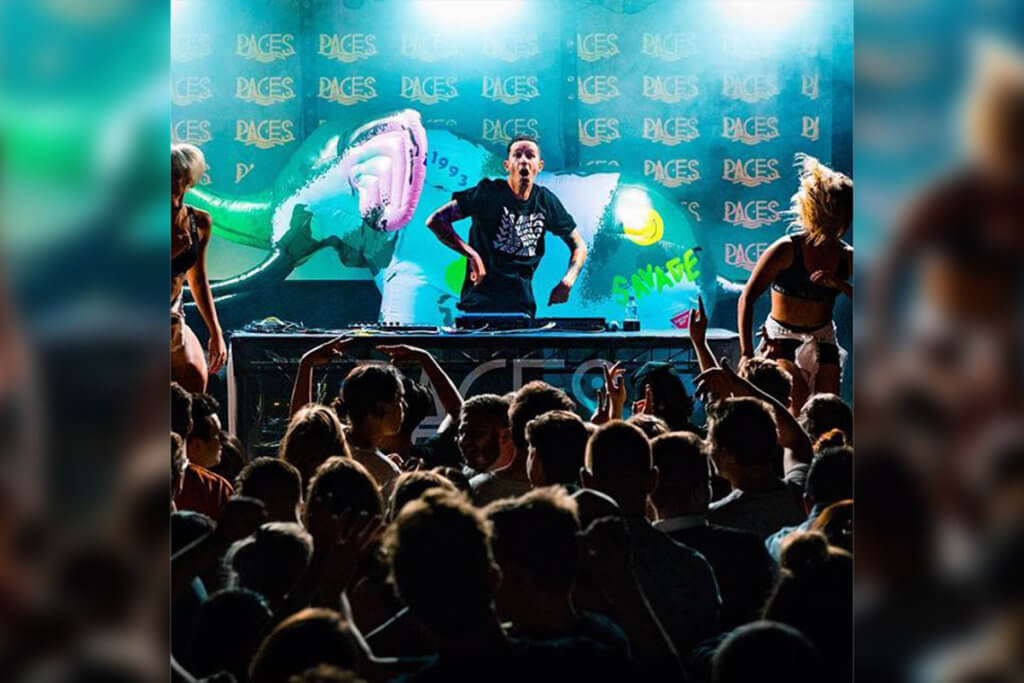 The Australian gold certified record producer and notable musician Paces came to Inflatable Anything in his search for an iconic stage prop that would: a) aesthetically represent his identity as an artist and b) create a lasting impression to his sets at a series of festival shows over the summer.

Upon receiving the initial enquiry and conversations with Paces, we knew this was something we could absolutely create - a giant inflatable elephant - Paces spirit animal. With our extensive experience in creating bespoke inflatables and our impressive portfolio, we were ready to elevate the vision Paces had in mind and bring it to life.

On This Page:
1 The Start Of An Icon
2 2D And 3D Artworks
3 Giving Life To The Inflatable Elephant
4 A Lit Spirit Animal
5 Have an Inflatable Idea?

The Start Of An Icon

Paces’ wanted an attention-grabbing, inflatable version of his spirit animal - an elephant - to accompany him during his stage shows. Paces’ had an original artwork design he wanted to apply to the inflatable elephant, it was from there we designed the elephant's shape and size in line with the end goal - a giant inflatable elephant!

The initial creation of an idea is an important step in our process, aligning the clients vision, needs, and wants to ensure we can delight them with the final product.  From here, the project really started to take shape and Paces’ and our team were ready to take the vision and apply them to 2D and 3D concepts.

The next step is extremely crucial in creating any great inflatable. Though we have done countless custom inflatables before, each one is bespoke and completely different from the previous ones and we always curated every detail as carefully as possible, using the client’s brief as our guideline.

Our creative team came up with the front and back 2D designs, integrating the original artwork as requested. Then, we used the 2D designs as reference points to create the 3D object using computer software and began working on the dimension of the inflatable elephant.

Paces agreed with our recommendation that aside from the attractive design, the scale of the inflatable had to be big enough for the crowd to notice it on stage. With that consideration in mind, the inflatable elephant was designed to be 4 m long from the tip of its trunk to its tail, 2.5 m high, and 1 m wide. Once Paces gave us his stamp of approval on the final design, we moved forward to the production process.

Giving Life To The Inflatable Elephant

From this point on, the hard work began for our manufacturing team. As Paces’ artwork was in full colour and the inflatable elephant was to be fully printed from trunk to tail, we first ordered sample swatches to see how the shades would look like in real life. The results were perfect, allowing us to carry on with printing the materials which were then cut and assembled together. Our team’s expertise and experience resulted in the manufacturing process to be completed quickly and without problems.

As part of our stringent quality control procedures, we set up the inflatable elephant in a trial run at our factory upon completion. We thoroughly checked the stitches, the colours, the time it would take to inflate and deflate the unit—all tests the inflatable elephant passed with flying colours. After that, we shipped it with care to Paces.

There was an internal blower attached to the animal and once plugged into a power source, it would only take 10 minutes to set it up. Quick, right? The inflatable elephant was ready to join the festival hype in no time. Plus, it had an internal system of LED lighting in place and we all know what that means: the animal was lit, both figuratively and literally in this case. It was exactly the kind of cool Paces was looking for.

When he received the inflatable elephant, Paces was over the moon with the results and he wanted to bring the animal with him everywhere he went! We were glad to see the inflatable elephant ended up as his loyal companion to all kinds of promotional events and activities. Not to mention it often became a featured guest in his Instagram posts, too.

Have an Inflatable Idea?

Here at InflatableAnything, we’re all about exceeding expectations. If you are looking for a custom inflatable, we are ready to cater to you! Get in touch with us today and bring your idea to life with flawless execution.