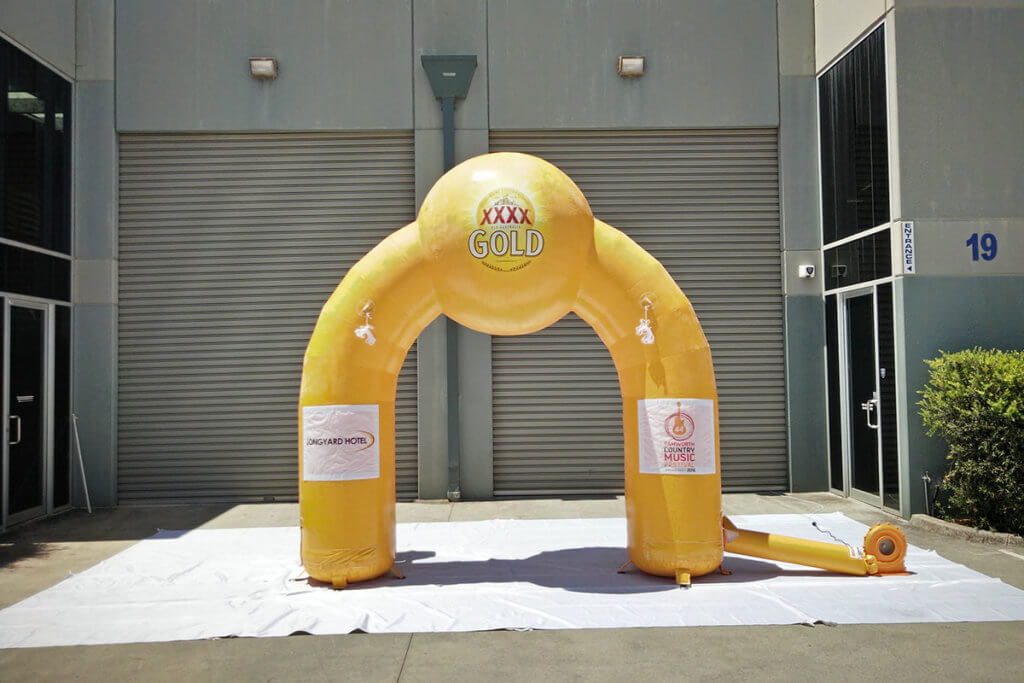 We were excited beyond words when Lion Co, one of the country’s leading food and beverage companies who is most well-known for their XXXX beer range, contacted us with a golden opportunity to promote none other than their XXXX gold product, with a unique inflatable entrance arch. What were the chances!

Besides the popular XXXX beers, Lion Co. also marketed premium brands in other categories, ranging from non-alcoholic beverages such as dairy, juice, and soy milk, to cider, wine, spirits, and alcoholic-ready-to-drinks beverages. If there were a jack of all trades in the food and beverage industry, Lion Co. was no doubt a name to be associated with the term.

On This Page:
1 How a Great Inflatable Entrance Arch Began
2 Creativity in Action
3 A Gold Arch for a Gold Product
4 A Brighter Tamworth Country Music Festival
5 Have a Design in Mind?

We sat down with the client and talked about the advertising strategy they had in mind and how Inflatable Anything could make an excellent contribution to the effort. Lion Co. wanted an inflatable entrance arch to use in the Tamworth Country Music Festival, placed right at the entryway to welcome the crowd to the event.

In this project, having years of experience creating custom inflatables for many clients played to our great advantage. Our portfolio of inflatable arches was given to the client to allow them to visualise the work we have done previously. From the pictures provided, the client pointed out features they would like to be included in their own inflatable entrance arch, which guided our perspective through the design process.

Our creative team poured their imagination and innovation into the 2D drawings, inspired by the client’s vision while noting their preferences for the inflatable entrance arch. The unit had an internal width of 2 m and internal height of 2.4 m, which was quite small compared to the regular entrance arch, but this feature was requested by the client. As they wanted a modest walkway into the Tamworth Country Music Festival, we were all too happy to comply.

Another feature of the inflatable entrance arch that set it apart was the customized 3D shape at the top of the archway. The truly unique feature of the unit was an ingenious strategy to make the product branding stand out. After we matched the color of the archway with the raw logo the client provided for our perusal, the artwork was then sent to the client. We didn’t forget to include the position of the banners and their designs, as well as placement of the metal D rings required to secure the unit.

The client signed off on the 2D mockups without a hitch, thanks to our attention to detail which made certain that the design was created according to their specifications. Without much ado, we moved on to the production stage, very much impatient to see how the initial design would translate into the final product.

A Gold Arch for a Gold Product

The manufacturing process began with the printing of colour samples to ensure we had the distinct shade of XXXX Gold right, then we proceeded with the printing of the material. In this stage of the inflatable entrance arch production, we needed to print the logo at the top of the archway. We faced some difficulties as the logo was curved around the face of the sphere, but we successfully navigated our way through the challenge with the help of our previous experiences and persistence.

Lion Co. had plans to reuse the inflatable entrance arch for other events after the Tamworth Country Music Festival, a fact we accounted for in the creation of the arch. The banners were made with Velcro backing which meant they could be removed and replaced accordingly, should the sponsorships change in the future. The client would only need to order new banners to adjust, and not allocate cost to purchase a new inflatable.

Prior to its delivery to New South Wales, Australia, the unit underwent thorough quality control procedures and met all the standards set by our team.

With the blower tube and blower that were delivered with the inflatable entrance arch, the client only needed 5 minutes to set the unit up. No time to waste at all! They especially applauded our success in printing the XXXX Gold logo and the flawless execution of the unique shape of the design. But it wasn’t only our team and the client who were delighted with the result. The people who came to the festival walked under the spectacular archway and spent their evening in a blast—listening to good music with a cold 4X Gold beer in hand.

Have a Design in Mind?

Contact us today to have an inflatable uniquely tailored to your idea!