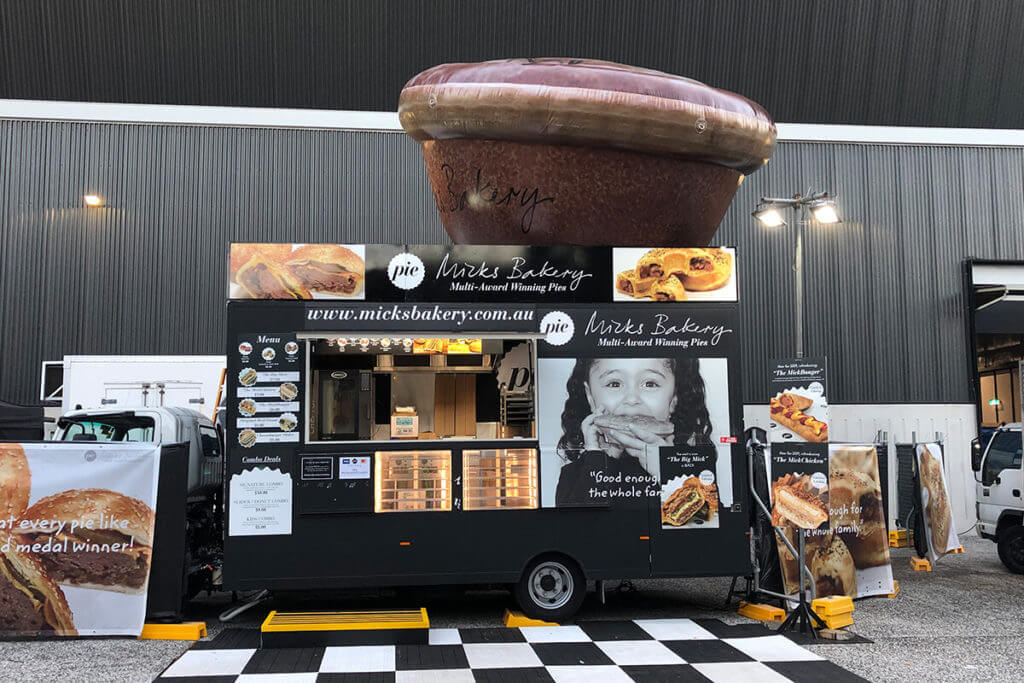 We are in the business of making custom inflatables Australia wide. Many companies recognise the potential impact these have on larger audiences, because they create a sense of fun!

We were contacted by Mick of Micks Bakery, as he was toying with the idea of making an inflatable replica pie.

No problems we said. Although we had never created a pie before, we have extensive experience with regards to creating custom made inflatables of any kind. Every single project that we work on is bespoke, and there are no “off the shelf” inflatables so whatever his idea in his mind was - we would definitely be able to help.

Every year Mick attends the Annual Easter Show in Sydney where he sets up with his van and makes and sells his delicious pies.

This is one the largest events throughout the year for Mick and this year he was looking to make an impact every greater than ever (because of course, the pies speak for themselves, but let’s take that up a notch).

The idea was to put a custom made inflatable on top of his van to really grab people's attention from far away.

We always get excited discussing new concepts with our clients, and we were certain that by producing this giant pie, it would help Mick to attract more customers to his business. This is what we’re all about.

Inflatables are a great way to promote your business in a biiggggg way, and they easily help you make the type of impact that’s not really possible without one.

After some back and forth discussions, we settled on a concept of a giant inflatable pie, on a base, slightly angled, with Micks Bakery written on the side. The pie would be secured to the top of the food van (while stationary of course!), with the option to have lighting inside if required in future (which would work great for night time events).

As with any project, safety is a key priority for us.

We knew that Mick wanted to put his pie on the roof of his food van, so we made sure that he spoke to the events team that he intended to use the pie at before he placed any order with us. This also helps us incorporate any specific safety requirements they provide into the design.

It’s common that different events have different requirements and it’s important to get approval from them first before investing in an inflatable that they might not approve of.

This isn’t because the inflatable itself is dangerous, but rather because of their policies or rules around different types of promotional items.

Luckily for Mick, he was able to get the approval without any issue, and we were able to start making the inflatable replica into a reality.

Bringing Custom Made Inflatables to Life on the PC

As always, the first step was to create the real life unit on a computer so that we can confirm the shape and the design.

We asked Mick to work with us on this and provide us with sizing and images of his real pies so that we can use that imagery on the final product. Mick wanted to get this right, so he took heaps of different photos for us to use, from all angles, which meant that we could make the final product extremely realistic after printing.

The full surface of this custom made inflatable was being printed, so no detail was spared into getting the replica looking exactly like a real pie!

Manufacturing & Delivery of the Custom Made Inflatable

Upon receiving Mick's approval of the design, the total manufacturing process took a couple of weeks. After the pie was printed, cut, sewn and tested, it was delivered to Mick.

As with anything, we always recommend that “dry runs” are completed before any event to ensure that you’re familiar with the inflatable, how it works, and have also created a plan around how it will be secured to the ground, or in this case, the van. The last thing you want is to be stuffing around on your event day, you just want to arrive, set up, and trade.

After the dry run, we spoke to Mick, and he said he loved the pie and it was exactly what he expected. We received this photo from him after the Easter Show and were blown away by the impact the pie has for this stall!

We’re glad to see Mick over the moon with his pie, and he has actually returned since to buy another one, although this time it would be smaller and more portable for smaller events he attends.

We would like to wish Mick all the best and to thank him for the opportunity to work with him for this project! We get excited after each new order, as it goes to show how much is possible in the world of inflatables.

We produce and sell custom inflatables Australia wide. If you’re looking for some custom made inflatables, speak to our team now to discuss your ideas, and we will walk you through what’s possible in terms of bringing your idea to life.!