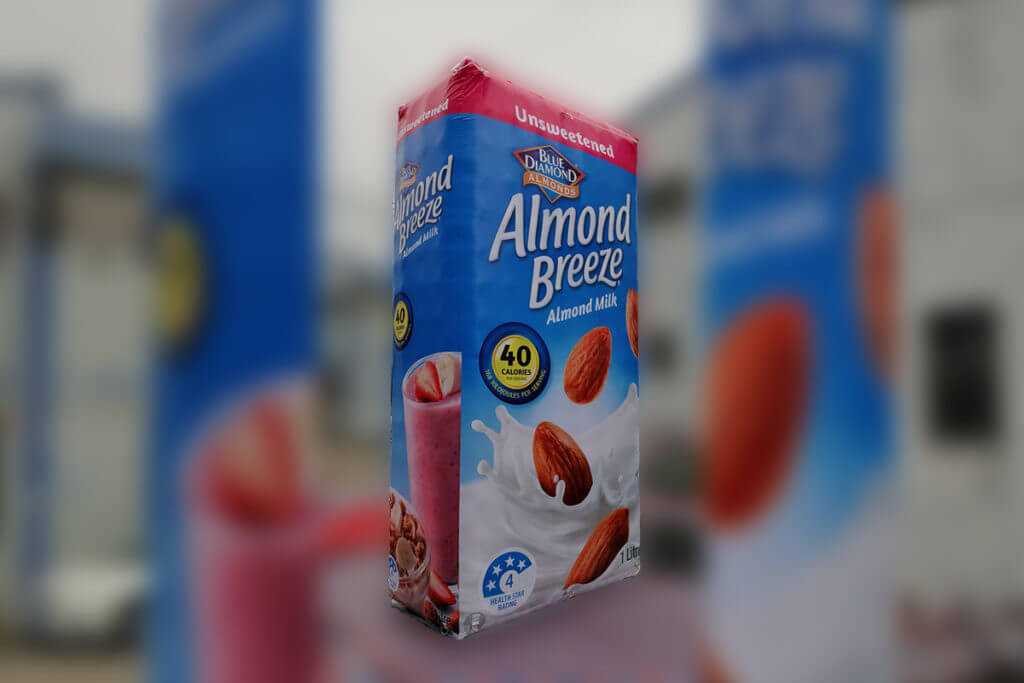 We were approached by Blue Diamond to help them create a giant inflatable replica of their Almond Breeze almond milk to use at travelling trade shows and road shows to promote their product with the public.

They thought that having a jumbo inflatable milk bottle version of their product would be a great way to attract some attention to their stand, and boy did we agree. Creating a custom inflatable for advertising your brand is a very cost effective way to draw a large amount of attention, and we always get excited by new projects we are presented with.

After some discussions, we settled on a concept and a design and went ahead and produced the inflatable milk bottle for them.

We think it turned out great in the end and received some very positive feedback about it from the client, Blue Diamond.

On This Page:
1 Inflatables Are About Scaling Up
1.1 Inflatables Want To Be Round
1.2 A Custom Inflatable for Advertising Multiple Products
2 Finishing Up The Jumbo Inflatable Milk Bottle

Inflatables Are About Scaling Up

A lot of our projects actually start with real versions of products that we are tasked with copying, which we recreate into a much larger scale than the original retail product.

As simple as this inflatable milk bottle would seem, there were actually some quite complex considerations that needed to be included otherwise the final product would not turn out as required.

Inflatables Want To Be Round

The first major consideration was that this giant inflatable replica had to have flat sides. By nature, inflatables want to be round, like balls, due to pressurised air trying to expand every corner of the inflatable's fabric.

In order for the surface to be flat, you will require some internal frame work to prevent the unit from actually inflating out into a rounded shape. Typically, this can affect the surface of the unit as you either need internal sheets of fabric to pull the unit back together, or ropes inside which give the surface a puckered appearance once set up.

However, a lot of the time this is at odds with the appearance of the final product, especially when you’re trying to replicate a retail product which consumers are very familiar with. We do however have a solution for this, is that we basically create a double layered product. The first part consists of an internal bladder, that is the inflatable part, and then the second part is an external sleeve, which contains the printing.

This means that what the bladder looks like doesn’t actually matter, and you can get a very nice surface finish on the final product as the sleeve is really only there to provide the final appearance and is not structural at all.

This is our go to method when customers state that they are very particular about the final appearance of the inflatable.

A happy consequence of this is that we’re able to produce what we call “reskins” for the bottles / inflatables where in future to change the print, the customer doesn’t need a whole new bottle but rather just a new “skin”. This means you can actually remove the bladder from the inflatable milk bottle and just insert it into the new skin.

This was particularly appealing to Blue Diamond because they have multiple milk brands that share the same size packaging, but are just marketed to different audiences and also have different milk alternatives as part of their product range.

The client was very happy to hear about the direction we were taking, as it allowed them to get much more value for their money in general from their giant inflatable replica and the amount of application it was suitable for just increased significantly.

After the original engineering of the inflatable milk bottle, it was all systems go to get the project finished in time for the client and their first upcoming event.

As usual our expert team was ready to hit the ground running and smash out this project in record time. We had approximately 2 weeks to produce this giant inflatable replica, and thankfully everything went smoothly throughout the whole process.

After the unit was finished, we set it up for the quality control part of our process. We left it set up for 48h hours, as this is standard for us, and the unit passed with flying colours. So off to it’s new home it went, ready in time for the first event.

A few weeks later we received some feedback from our client that they were delighted with their jumbo inflatable milk bottle, and that it had received plenty of comments at their first event, so much so that they were soon returning for a replacement skin for their other brand to use at a different show!

Are you considering a custom inflatable for advertising your brand? If you are looking for a unique way to advertise your products and engage with your audience at events, chat with us today about all the different possibilities a custom inflatable can offer. We are more than happy to run through price estimates and design concepts with you.