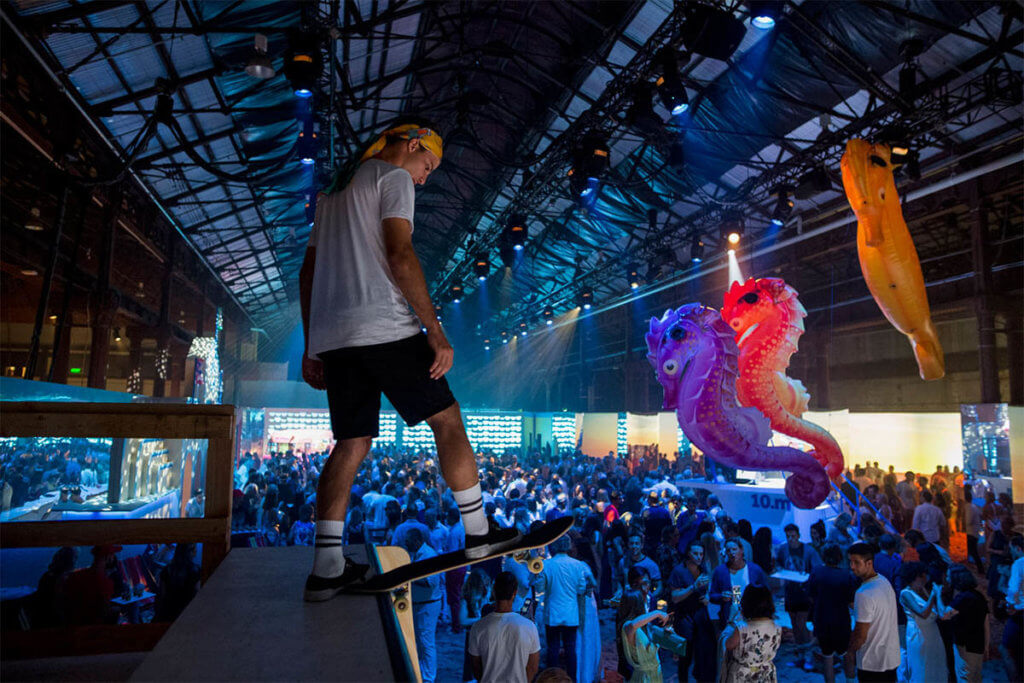 We were approached by one of our regular agency clients and had a unique idea floated by us.

They were hosting an upcoming event for a larger multi national brand that was breaking into Australia, and part of the theme of the event was that it was a beach/marine theme.

Part of this theme included the presence of certain marine animals that aligned with the brand. These marine animals were none other than - INFLATABLE SEAHORSES!

Of course, as always, we discussed the feasibility of the idea with the client and we knew that we could help.

The premise was to have three different seahorses, each in a unique colour. They were to be hanging from the roof of the event, and would be required to run for several hours for the duration of the event.

We are able to not only deliver the seahorses on budget, and on time, but we also received a great response from the client about the success of the event.

On This Page:
1 The Inflatable Seahorse Concept
2 The Shape & Artwork
3 The Construction
4 The Dry Run
5 The Main Event

The concept of the event was a beach and marine theme and the event was to be hosted inside a warehouse that would be converted into a beach.

The inflatable seahorses were going to be strung up from the roof, and be showpieces up in the sky for the crowd to see.

A total of three seahorses were going to be required, one in yellow, one in orange, and one in purple.

The idea was to have the most realistic possible shape to the seahorses, but the artwork itself didn’t need to be as perfect. At the end of the day, the client, and the client's client, understood that these were inflatables and were never going to be exact fibreglass replicas, but conceptually they were going to work well to communicate the message.

After some back and forth discussing the particulars, we agreed on a price and the client committed to moving ahead with an order.

The first part of the project was to agree on the general shape for the unit.

Every single inflatable that we make is custom and bespoke, there are no off the shelf inflatables so each one is a custom made inflatable for that particular client to their design and specifications.

This gives great flexibility in how we can bring your ideas to life because it literally means there are no limits (within reason) to what can be achieved.

This does however add a little bit of time to the process once you agree to buy an inflatable because we need to design your inflatable at that time.

For this inflatable seahorse, the shape was nailed basically on the first attempt because it was a well known shape and we were referencing a real life animal. The more challenging situations are those where there is no “Reference” item or shape, and we are just going from a client explanation.

Once the shape was confirmed and signed off, we moved on to the artwork part of the process.

In this particular case, we actually had our client complete the artwork for the seahorses so what they really needed from us was a template.

Because the shape was confirmed, we could just output a template and send that to our client to complete.

The artwork that came back looks fantastic and we were excited to get this off to the press to start printing it. We knew that once the item was printed, cut and sewn, it was going to look amazing and even more amazing when set up at the event for the end client.

As soon as the inflatable seahorse design was approved it was sent off to our manufacturing team to get on it right away.

We knew the client event was fast approaching (when isn’t it!) and therefore put our best personnel forward to work on this project.

In little to no time, the inflatable seahorses were printed, cut, sewn and ready for testing.

The final product came out better than expected, and although we had seen the seahorses at our warehouse during the testing, we were extremely excited for our client to receive them and use them for their event.

With days to spare ahead of the event, the inflatable seahorses were delivered to the client ready to go.

We always recommend that “test runs” are completed prior to the main events, and this is exactly what our client did here.

A few days before the event was due to run, they set up the inflatables and made sure that everything was working as expected (as expected!) and therefore there would be no surprises at the event.

When the day of the main event came, all that was required was for the seahorses to be switched on.

Within a few minutes, they inflated themselves to full pressure and started to be the centerpiece of the event.

The event went off without a hitch, and was a great success for our client and their client, mentioning several times afterwards that the seahorses were great and they were thankful we got them to them in time.