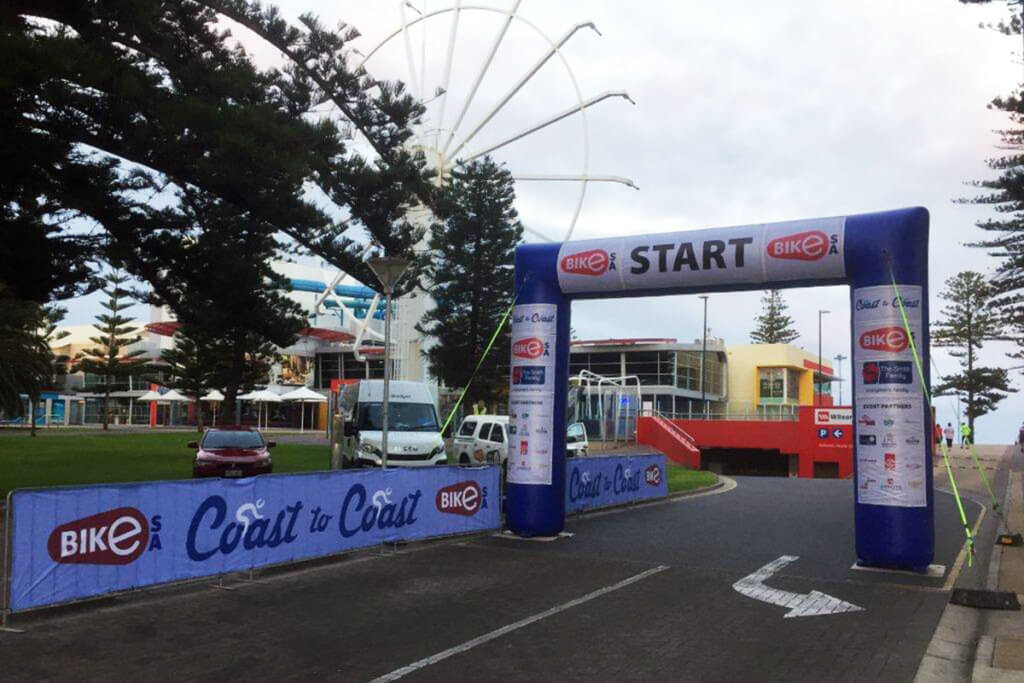 Bike SA run some of the biggest, mass participatory bike rides in southern Australia, so when they approached Inflatable Anything with a very specific brief for an inflatable start line arch, we knew we had to come up with something fantastic for them!

Bike SA wanted the arch to be used at multiple marathons, races and outdoor events. It had to be able to fit multiple cyclists through the archway. It also had to have ample space for numerous banners, to make sure that all the different sponsors’ branding could be clearly seen.

Because the inflatable start line arch was to be used for numerous events throughout the year, the arch had to allow for the banner designs to be changed regularly.

Square Peg in a Round Hole

Inflatable Anything was under orders to come up with an eye-catching design for Bike SA and so our team of professional and capable designers were set to work straight away.

It soon became clear that a conventional archway wouldn’t be big enough to fit all the sponsorship banners that were needed. The design had to ensure that while fulfilling its practical objective of being able to fit all the riders through the middle, the inflatable start line arch also had to display numerous sponsorship banners at the same time.

As we’ve had years of experience developing custom inflatable arches, we recognised how important it was to Bike SA to make sure that their sponsors were kept happy with prominent banners on display.

And so, we suggested the use of a ‘square’ shape rather than a rounded arch, which would create a greater surface area for the inflatable start line arch. Double sided Velcro was also incorporated into the design, so that all the banners could be securely attached to the archway.

The team at Inflatable Anything really do think of everything when it comes to their designs, and so for added rigidity, D-ring tie down points are a standard inclusion of the inflatable start line arch. This was to make sure that whatever the weather, the arch would stay exactly in place.

With internal dimensions of 4 meters in width and 3.5 meters in height, the inflatable start line arch still provided a good-sized opening for the cyclists to pass through.

The next task for our designers was to make sure that the colour of the inflatable start line arch really ‘popped’ for maximum visual impact.

Using the universal Pantone Matching System (PMS), we were able to guarantee the colour finish would be an exact match of their original brand colour. This meant that the corporate logos and branding of Bike SA’s sponsors looked precisely as they should.

When we ensure our clients sponsors are properly represented, we know that everything goes so much smoother for our clients.

Bike SA were eager to see the design concept that we had come up with and to make sure that we had managed to successfully include all the elements of their design brief. They needn’t have worried, because as always we exceeded expectations and Bike SA were delighted with the design.

Having gained approval for their plan, the inflatable start line arch went into production straight away and the end product was delivered to the client on time and on budget.

The client couldn’t wait to see the inflatable start line arch in action that we had created for them. The pictures from the first set of events helped to show just how impactful and professional the archway looked. Bike SA were thrilled with their inflatable start line arch and particularly liked the fact it could be set up in just 10 minutes, saving valuable time before busy events and races.

Thanks to the meticulous design and attention to detail, the inflatable start line arch could be set up and taken down multiple times, and the display banners could be changed as often as was required, meaning the product was able to offer the ultimate flexibility.

Bike SA were so happy with the service they received from us at Inflatable Anything, they have moved things up a gear, by placing many subsequent orders for printed banners. After a number of events and races, the inflatable start line arch is still going strong.

Why not set us a challenge? We really can try and make anything into an inflatable, so let your imagination run wild and have a chat with us on what you’d like us to make for you. Inflatables are a great and fun addition to any special occasion, product launch or business event, so give us a call or drop us a line today and see what we can come up with for you.