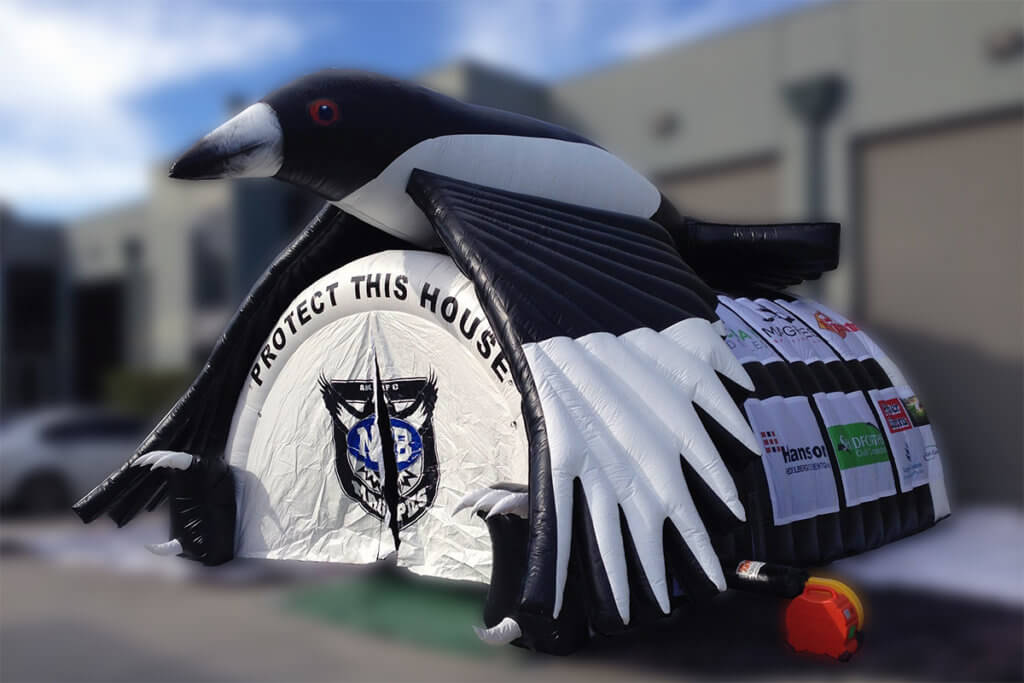 When we were approached by Mackay Regional Council with a very particular brief, we knew we had our work cut out for us. Never ones to shy away from a challenge, we got to work straight away on bringing their vision of an inflatable tunnel to life.

Having seen an inflatable sports tunnel on TV from a football game in the USA, the client had a very specific idea of what they wanted us to make for them. They wanted us to create a replica inflatable tunnel to promote a not-for-profit, community club, the Magpies’ Sporting Club.

The idea was for the tunnel to display the club’s logo and the logos of all their local sponsors and also for the inflatable tunnel to make a real visual impact, to help spread the word about the club.

Run by enthusiastic local members, the Magpies’ Sporting Club had helped to create a real sense of community in the region. So it was crucial that the inflatable sports tunnel helped to reinforce the message about the good work the club had done for local people.

On This Page:
1 Tunnel Vision
2 Light at the End of the Tunnel
3 Make a Grand Entrance

Fortunately, with modern CAD technology at our fingertips, we were able to produce some very detailed plans for the client, so it was crystal clear what the inflatable tunnel would ultimately look like.

Working from the image of the original inflatable sports tunnel provided by the client, we set to work on transferring the concept to our own bespoke version for the client.

We had detailed discussions with the team from the Magpies’ Sporting Club and Mackay Regional Council to make sure we knew exactly what their requirements were. They wanted a large inflatable tunnel with a wide opening at the front and back, so that many players could run through the tunnel at once. They also asked for the ability to attach banners to the outside of the tunnel, in order for them to display their logo and the logos of their local sponsors.

We soon came up with workable dimensions of the inflatable tunnel and then we built up our design from there. This tunnel needed to be large enough for people to pass through it with a door opening at the front, so we came up with a height of 4.7 meters, a width of 7.5 meters and a depth of 9.2 meters. This allowed plenty of room for people to go in and out of the tunnel, and the size gave it real visual impact too.

The design was really coming together now, with more details being added all the time. We pride ourselves on our attention to detail here at Inflatable Anything and this project was no exception, with every aspect of the inflatable tunnel being measured and included in the complex design.

Light at the End of the Tunnel

Having finalised the designs, we presented them to our client who said they couldn’t wait to see the end product. No pressure, guys…

The inflatable tunnel went into production straight away and despite its complicated structure, we were able to complete it on time and on budget – as always!

Before releasing it for final delivery, we gave it a thorough check over to make sure it ticked all the boxes on the brief presented to us by the client. Straight away we could see how eye-catching the inflatable tunnel was – it had real impact and we were confident it would fulfil everything the client wanted, in terms of creating a buzz around the Magpies’ Sporting Club and the local community.

On a practical level, the tunnel was really easy to inflate (despite its size it was surprisingly easy to transport) and only took around 5-10 minutes to set up. Once the blower was connected and turned on, the inflatable tunnel basically opened itself.

Custom inflatables have a unique way of capturing excitement and creating a sense of fun! The bigger it is, the greater the impact.

If you are looking for a way to better engage your brand with an audience, speak to our team of experts at Inflatable Anything today. With nearly ten years of experience in working with custom inflatables, we go through all the ins and outs to ensure you are left with nothing short of a masterpiece.