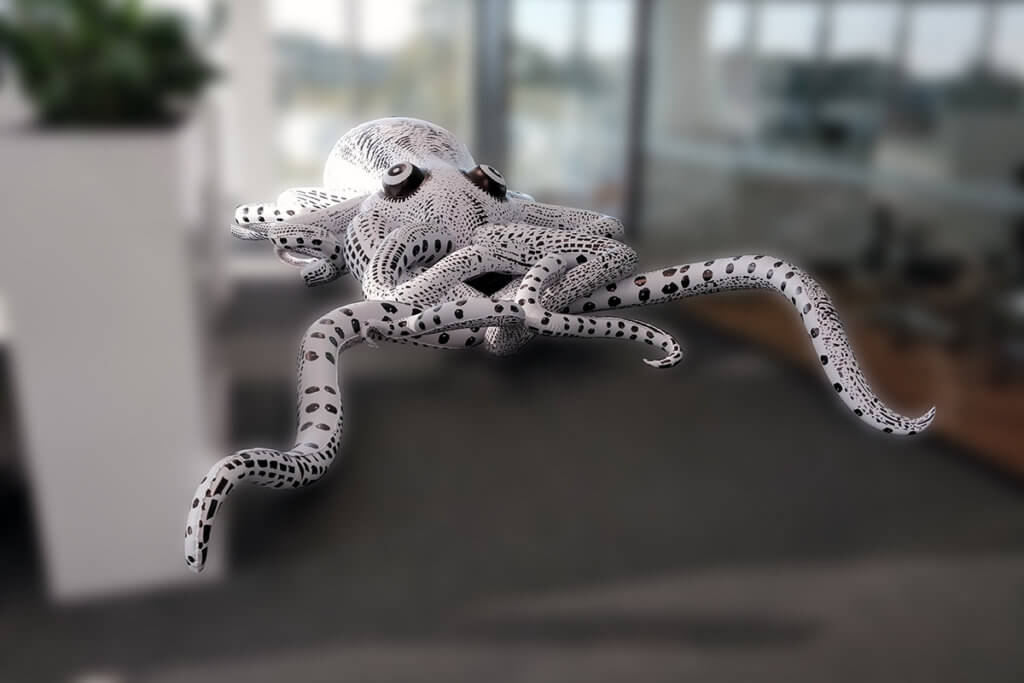 Based in Sydney, Flying Ruby Events are an event production and brand activation agency and they came to us at  Inflatable Anything with a very unusual brief – to create an enormous and lifelike inflatable character.

Flying Ruby Events create bespoke events for their clients and pride themselves on their attention to detail. Having this commitment in common was what made them come to us in the first place, because they knew we shared the same passion for making sure every last detail was perfect.

The kraken was to form the centrepiece for the launch of a new release from Kraken Rum. It was the feature mascot on their rum label, so it was crucial to bring together the brand with the kraken and was to be suspended in a net from the ceiling in pubs and clubs throughout the launch.

The challenge for us was to come up with a kraken that had a real ‘wow’ factor but with very little information to go on and a highly complex inflatable character to create, we certainly had their work cut out for us.

On This Page:
1 From Myth to Reality
2 Bringing the Inflatable Character to Life
3 Release the Kraken

From Myth to Reality

Working from a grainy photograph, our designers at Inflatable Anything got to work right away and had to use all their expertise and knowledge to come up with an exceptional design for the client.

Not only was it a question of getting the inflatable character as anatomically accurate as possible, but it was also necessary to have space for the branding of the product on it too.

It needed to have real impact and this was something we made sure was an absolute priority throughout the production process.

It was one of the company’s most complicated inflatable characters to date, due to the fact that it was a very detailed design and there were lots of seams required throughout. At four meters in length, it was also very big!

As an additional technical feature to factor in, we had to design a kraken that didn’t need the blower to be attached permanently. This was to make sure the product gave maximum visual impact and was to be incorporated into the design without detracting from the overall look.

Making sure the client was happy with the design was crucial and so getting their approval for the initial design was the first hurdle. Having overcome this, we now had to make the design into a reality.

Bringing the Inflatable Character to Life

Knowing the inflatable character was to be the focal point for the brand launch, which took place in three states over the course of three weeks, it added an element of pressure for us to get this done in a timely fashion. They wanted to create something truly special to fit in with the dramatic and impactful theme of the brand activation.

We certainly rose to the challenge, perfecting every last detail of the inflatable character from the complexity of the body, to incorporating the branding into the design and making sure the overall look fulfilled the client’s brief.

We had to make sure the inflatable character was manufactured in time for the first launch event and despite the complexities of the production process, they delivered the inflatable kraken on time and on budget.

We couldn’t wait to see the client’s reaction to the unveiling of the creature at the event and it certainly didn’t disappoint, creating a truly stunning visual which tied in perfectly with the rest of the branding.

The team here at Inflatable Anything love a challenge and really enjoyed creating this epic inflatable character. For a mythical creature, the kraken was so lifelike that the team got quite attached to it during its creation!

True to our name, Inflatable Anything makes absolutely anything out of inflatables. From marquees to mascots, and from animals to arches, and just about everything in between, the possibilities are endless. Why not give us a call today with your idea and we’ll bring it to life for you?