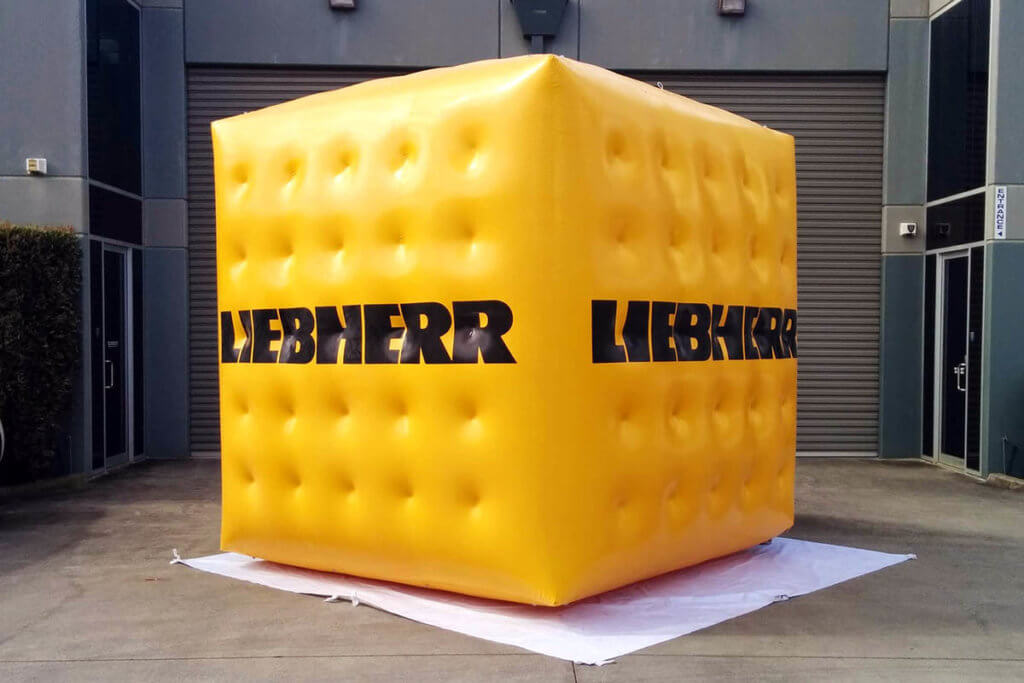 Liebherr Australia are the world’s leading manufacturers of construction machinery, and they wanted to sit down with us to discuss a large custom inflatable project they wanted us to create for some upcoming outdoor events and field days.

The construction machinery that is manufactured by Liebherr is used in mines so they wanted to create an inflatable that would also reflect the scale of their work - the large inflatable needed to be epic.

We couldn’t wait to sit down with them and discuss their ideas!

Liebherr Australia came to us with the idea of a display to attract attention at their events and outdoor field days.

They wanted to create a display that would have a huge impact when set up, and part of that involved a huge giant “item” that would hang from a crane. They had used similar items before at indoor trade shows, but this was new as the upcoming trade show was actually outdoors.

As they manufacture cranes and industrial machinery for mining, they wanted to recreate this idea using one of their cranes to hang the large inflatable in the open air.

They decided on a huge cube that would make their team & stand easy to spot at an outdoor event and attract attention with its sheer size suspended in the air. Once we had discussed the colour scheme and printing it was time to get down to making the cube.

The artwork for this design was very simple and took no time at all to draw up.

Our design team outlined the dimensions and decided that the Liebherr logo would be printed across the cube in a bold style with colours coordinating with Liebherr’s branding - yellow and black.

A straightforward design overall but it would still make a huge impact!

As Liebherr wanted to attract attention to their trade stand and make it easy for them to be recognised in the crowd, our team wanted to make the cube stand out.

The dimensions ended up being 3 metres wide, 3 metres high with a depth of 3 metres. When suspended in the air it would be unmissable - especially hanging off a crane!

The first major consideration our team had to undertake was how to ensure that the cube remained a cube. Generally, inflatables want to be round due to the pressurised air. In order to keep the shape our team decided that they need to put internal ropes and tethers inside the structure to hold the faces together and prevent the cube from becoming a ball.

This, in turn, can be problematic for some large inflatables as it often creates a pillowing or dimpling effect that changes the appearance. If this is a problem for the appearance of the inflatable, our teams have a range of methods to counteract this issue. However, after discussing this with our client, they believed this wouldn’t make a huge impact to the overall concept and the pillowing wasn’t a problem.

As the cube would be hanging from the crane a constant blower couldn’t be used. Our manufacturing team decided this large inflatable would be a sealed unit with air release valves as it would be too difficult to get power for a constant blower up that high. It would therefore take a little longer to set up the trade show inflatable cube due to its sheer volume, taking approximately 30 minutes.

Our team also integrated eyelets to the cube so it could be hung from the roof, or in this case the crane.

After completing our stringent safety checks and getting approval from our client it was time to send the cube off to Liebherr in Sydney to use at their next trade show.

Our client was really happy with the final outcome. The giant large inflatable drew the eye of everyone at promotional events and field days, with the bright colours easy to spot from a distance.

If you would like us to create something special for your event, or if you need a bespoke large inflatable to help with your marketing, please get in touch with us here at Inflatable Anything.

Our talented design team can create a mock-up of your idea in no time and our manufacturing team take a no holds barred approach when it comes to replicating any product.
At Inflatable Anything, we truly mean anything.