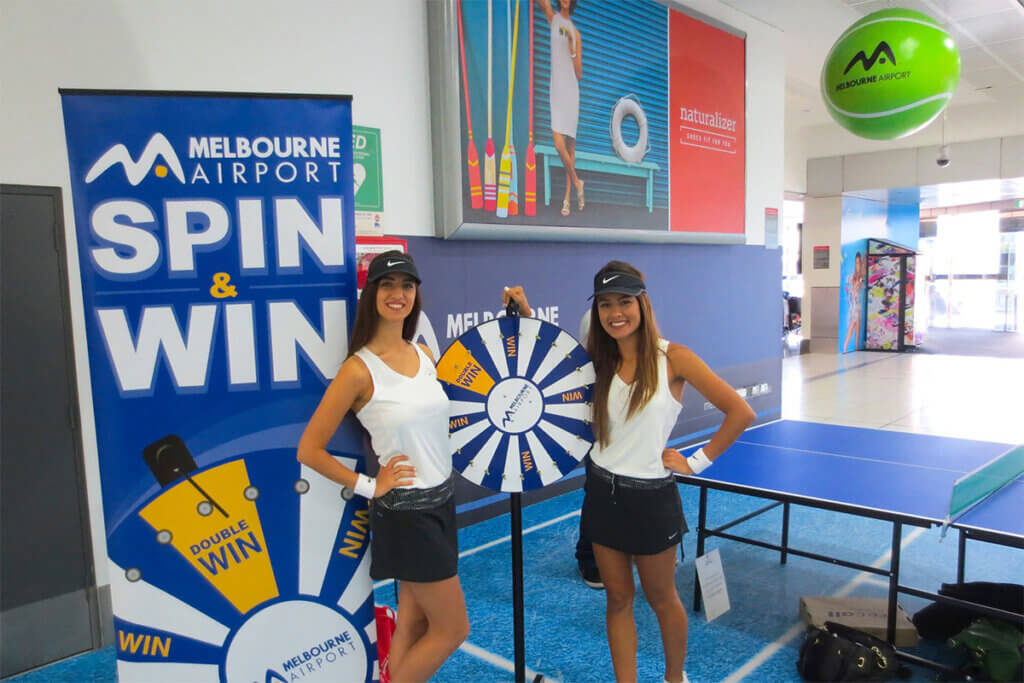 As a top destination, thanks in part to our wildlife and ecosystem, a good chunk of Australia’s economy is made up from the revenue earned through tourism within and into the nation. Inflatable Anything knew when the marketing team at Melbourne’s Tullamarine Airport contacted us about supplying them with promotional inflatable balls, we had to jump on the opportunity!

According to Tourism Research Australia, in 2014, international and domestic tourism added $102 billion to our economy, so it only made sense to promote popular televised sporting events in and around ‘Straya directly where nearly every single visitor to Victoria would be able to see it. That’s where we came in. We were beyond thrilled to be included in this genius plan to keep our country’s gross domestic product abundant and thriving!

On This Page:
1 The Game Plan
2 Prepping the Court
3 Proper Dress
4 The Perfect Spin
5 Love-Love

For this specific project, the client wanted us to make promotional inflatable balls to coincide with the 2015 Australian Open, the first of four Grand Slam tennis tournaments every year which is considered one of the top sporting events in the entire Southern Hemisphere. This event typically draws in upwards of 600,000 spectators anyway in recent years, and targeting travellers’ right as they step foot in the terminal was a way to hopefully pique even more interest in the tournament.

The Melbourne airport is one of the busiest airports in all of ‘Straya, second only to the Sydney Kingsford Smith Airport in New South Wales. This fact was largely why this specific location was chosen for this marketing strategy, and also points to why certain features were solicited for the promotional inflatable balls.

First off, while Tullamarine is quite large (almost 2.37 square metres), foot traffic can still occupy it from wall to wall on any given day, so marketing and promotional materials would definitely need to be as compact as possible. The client also specifically requested that, for the Australian Open inflatable tennis balls, they look as near to the real things as we could manage. Here at Inflatable Anything, we have quite a few years of experience under our belt of replicating objects, yet we still had some planning to look forward to.

Typically this kind of structure either calls for a solid print or a simple logo, but these inflatable promotional balls had to be way more detailed than what we were accustomed to. We decided to take an actual tennis ball and use the green textured pattern as a reference for the detail we digitally printed on the material for the inflatables, plus the logo for Tullamarine. The pattern was used over the entire surface of the spheres to really bring the promotional inflatable balls to life from every angle.

In general, one of the best materials for inflatables that need to last is polyvinyl chloride. Since these promotional inflatable balls needed to hold up before and during these sporting events, we went with the durable and long-lasting PVC. Using this particular polymer was also best for this project because the material is lightweight and portable, perfect for a continuing marketing strategy at different busy airports and a great way to further capitalize on the huge boost to our national economy that is tourism!

The construction of these promotional inflatable balls was similar to that of a soft plastic beach ball, in which the material is stretched, fused together, and circumscribed, in this case by white material to mimic the lines where the fuzz attaches to the tennis ball itself.

Each of our custom inflatable balls is manufactured with the option to be able to fill up and seal off the structure instead of requiring a continuous blower and just topping it off as needed, which was obviously the right choice here. To make the best use of the space available, in this instance, we included D-rings so the promotional inflatable balls could be easily hung from the ceiling in the Melbourne Airport, leaving Tullamarine’s nearly 21,000 passengers a day-on average- unencumbered.

As mentioned, these promotional inflatable balls were passed around between several Australian airports as part of an effort to further profit off of already profitable events, and it definitely paid off. The marketing strategy we helped execute was so effective that these inflatables have been reused several times to promote subsequent televised tennis and cricket tournaments.

Do you have a great idea brewing? Call our team of experts to turn that idea into a reality, no matter how big or small!