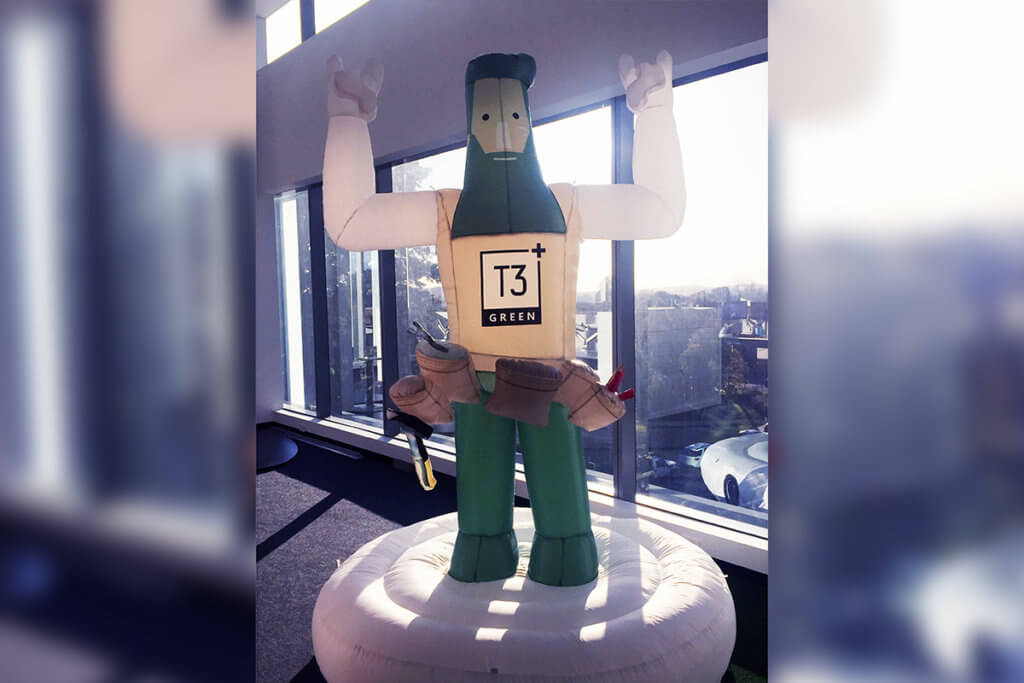 Hyne Timber is one of Australia’s largest manufacturers and distributors in timber products. Their product range includes the T2 red, T2 blue, and termite-resistant T3 Green timber; the third being our star for this project. Hyne Timber required a promotional inflatable mascot to be used on-site by their sales team, as a big and bold advertising attraction. The main requirement was to have an inflatable that was easy to use, quick to set up, effortless to pack up at the end of the day, and of course, eye catching!

On This Page:
1 The Beginning Of A Great Mascot
2 3D Artwork
3 Bringing T3 To Life
4 T3 In Action
5 Bring Your Mascot To Life!

The Beginning Of A Great Mascot

Before we began the creative process, we sat down with the client and discussed the initial concepts for their promotional inflatable mascot. It was crucial to align our priorities with that of the client’s, as every inflatable we create is specifically tailored to the client’s needs.

To kick-start the process, the client provided us with 2D drawings of the mascot with its front, back, and side view and highlighted the inclusion of the toolbelt as a special feature. After noting the design and the client’s intention to use the unit for indoor and outdoor events - we noted that attaching ropes from the inflatable mascot to the ground could potentially create a hazard for indoor and outdoor events alike.

We agreed that the best option was to design a base that would provide stabilisation to the promotional inflatable mascot, creating a secure base for the upper body of the inflatable mascot as it would be too heavy to be supported by the feet alone without ropes securing to the ground.

Subsequent to understanding the concept and making the necessary adjustments to the design, our creative team utilised the 3D CAD software to create the promotional inflatable mascot. We designed the unit to be 2.7 m high including the inflatable base, allowing the mascot to stand tall and proud while inflated.

Our recommendation was to have the inflatable base to include a zip which would allow additional weights to be put inside the base to help weigh the mascot down, a suggestion that was well-received by the client. The client gave their approval to the final design and we set off to manufacturing the promotional inflatable mascot. There was no hiding how ecstatic we were to see how the unit turned out; it was something incredibly special that we have never done before and couldn’t wait to bring the design to life!

The production team received the design from our creative team and immediately began the process as they understood the need to be swift in manufacturing Hyne’s promotional inflatable mascot. With our team’s skill and expertise, we assembled the high-quality unit ready to be delivered to the client.

Before the promotional inflatable mascot left our office, we carried out quality control procedures. One of the procedures was the trial set-up of the inflatable to ensure the internal blower in the base was perfectly functional once plugged into a power source. It was at this stage that we found the unit to be stable without the ropes. The mascot could stand upright on its own, adding to the general aesthetic of the unit. Everyone was thrilled with the outcome.

Once the unit was checked thoroughly, the promotional inflatable mascot was on its way to Sunshine Coast, Queensland, Australia.

Bring Your Mascot To Life!

At Inflatable Anything, we have years of experience working with a long list of clients in Australia and beyond creating bespoke inflatables for each one of them. There is no need to look any further, contact us today to get the conversation started on how we can bring your mascot to life!