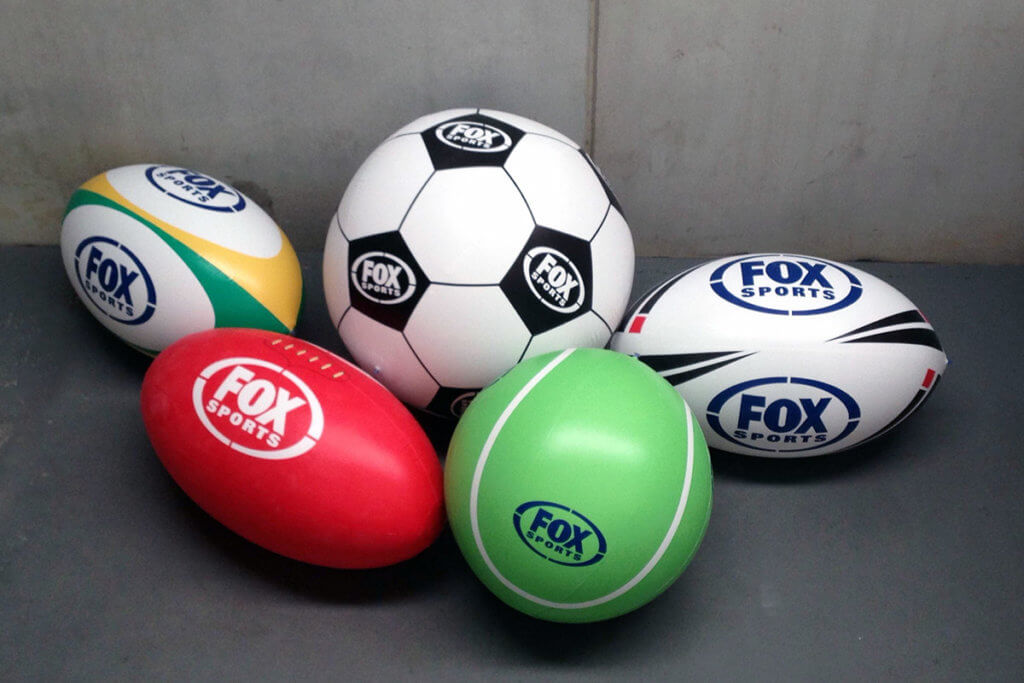 Inflatable Anything has worked with an impressive list of clients, so when we were approached by Australia’s leading subscription television sports channel, Fox Sports, we took it all in our stride and got to work right away.

Fox Sports is at the cutting edge of sports coverage, so is always looking for new ways to stand out from the crowd. When it heard about how effective customised inflatables can be in promoting businesses, the organisation didn’t hesitate in asking us at Inflatable Anything to help out.

Fox Sports was looking at coming up with a product that would promote a range of major upcoming sports events. They wanted something visually powerful that would form part of the set design for their sports coverage.

Straight away, our team came up with the idea of designing a range of custom beach balls. Fun, yet incredibly eye-catching, these custom beach balls would provide a colourful and memorable backdrop to the set during the TV broadcast of sporting events.

So, where to start with the design? Making sure the final design successfully fulfilled the original brief was of the utmost importance to our design team.

Having thoroughly researched what the custom beach balls were being used for on set, the designers suggested five different balls, each one representing the different sports that were due to be televised during the various events.

It was decided that they would be all different sizes and shapes, so they were distinct from each other and to make them stand out more effectively. And so, the round balls had a diameter of 1.5 meters by 2 meters, and the rectangular balls measured between 1 and 2 meters in length.

Another clever way the designers thought of to make the custom beach balls visually memorable, was to make sure they used bright, vivid colours so they really stood out on the screen.

Happy with our initial concept, we set about putting our ideas into practice and using the latest CAD software, we were able to come up with a series of designs to put to Fox Sports.

Sometimes it can be hard to imagine how a design will be brought to life, but Fox Sports knew their theme was in the hands of experts, so trusted us to come up with the goods!

Having approved the design of the custom beach balls we produced for them, we now had to make sure the different shaped and sized balls were all equally impactful. This is where the choice of colour came in.

Using a bright, predominantly primary colour palette meant that the colours really popped, for added on-screen impact. The balls were easily identifiable for the different sports they were associated with, making their promotional success even more impactful.

Next, we had to turn our 2-dimensional design into a 3-dimensional reality. We have plenty of experience of making different types of inflatable balls, so these custom beach balls were pretty straight forward for us to produce. They are generally made from PVC and can be screen printed to ensure a solid block of colour or they can even be digitally printed to allow for more complex designs.

Once we had manufactured the five different custom beach balls, we then undertook our usual rigorous quality control checks, so we knew for definite that every single inflatable lived up to expectations.

Beauty of the Custom Beach Balls

And then, it was just a question of delivering them to the client. The beauty of these custom beach balls was that once they were inflated, they stayed inflated for ease of use. But if needed, the balls could be topped up to guarantee they kept their shape and impact.

As you can see from the finished result, the custom beach balls clearly represent a number of different sports, which helped to highlight the diversity of sporting events broadcast by Fox Sports. Also, the balls clearly displayed the Fox Sports’ branding, sending out a clear message to viewers and reinforcing the fact that Fox Sports is the leading provider of sports on TV in Australia.

It was an honour for us at Inflatable Anything to work with such a prestigious brand and we were delighted that the team at Fox Sports loved the custom beach balls as much as we did. We got a real buzz from seeing them on TV screens throughout Fox Sports’ subsequent event coverage!

Why not have a think about how Inflatable Anything could come up with a customised and personalised inflatable to promote your business or event? Use your imagination, come up with an idea and we’ll do the rest! Contact our friendly team today to get the ball rolling.