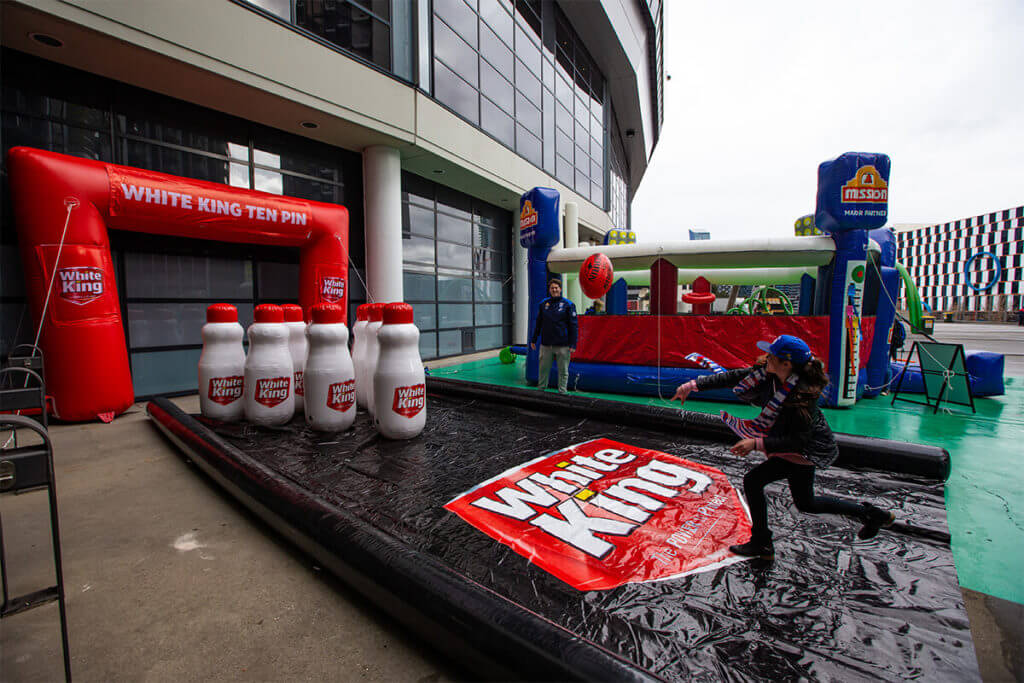 The great thing about custom inflatables is that you can develop a unique product that no one else has! For many companies, an event activation is a way to boost your brand in the public eye, so it is important to think outside the box. Inflatables can provide an interactive element, making it a fun and memorable experience.

The Birth Of A Concept

We've had a long-running history with White King and the Footscray Football Club. The Footscray FC crew contacted us and wanted to do something different to promote their sponsor White King, but they were unsure on how to go about it.

As we had previously worked with them on other products, we suggested inflatables as a new avenue to explore. We pitched the idea about a custom inflatable to increase engagement for future events, which the client took to really well.

What About An Inflatable Game Bowling Alley?

We drew inspiration from a previous project for Strike Bowling. We took the idea of a bowling alley outdoors, and made an inflatable bowling alley slip and slide to help Strike promote their business at events.

Instead of using standard shaped bowling pins, we came up with the idea of substituting the pins for White King bottles.

The client loved the idea, and after some further discussion and finalising the pricing, we were able to get this exciting new project venture underway.

Pins In The Shape Of White King Bottles

Every project that we work on is completely custom; no two projects are the same. This gives us great flexibility in designing inflatables that delight our clients because they align amazingly with their brand and activation objectives.

When we pitched the idea of bottles as pins, the client loved it, and although we had previously made a bowling alley and inflatable bottles separately, we had never put the two together.

After discussing with our manufacturing department, it was confirmed that the bottles would be durable enough to withstand footballs being thrown at them, so the concept was locked in and we started on the 3D design of the order.

One special request from the client was the inclusion of removable Velcro banners on the arch. We find this to be a common request for customers who also purchase custom inflatable arches.

This was so that if they wanted to, in future, they could re-purpose the arch. Remember, the client here was Footscray Football Club, and White King was their sponsor.

As happens from time to time, sponsors change, and by having the banners removable means that it’s simple and easy to re-purpose the arch by just having new banners printed in future, rather than remaking the entire inflatable game.

Starting On The Inflatable Game CAD

The first step was to design the bottles. To do this, we started off by buying a real white king bottle from our local Woolies, and used it to take measurements.

There were some challenges around the design of this bottle because the bottle has such a unique shape, and also had to be made from our more heavy duty material to withstand the pressures of being hit with footballs.

Once the bottle was designed, the next step was to design the alley and the arch. These are relatively standard in design, and so it did not take long for our design team to complete.

The job was sent to our manufacturing department after sign off. The whole process only took a matter of weeks, and after quality control and testing, the final pieces were delivered to the client prior to their next activation.

The client used the activation inflatable over a weekend, and we received a call on the Monday with some photos via email. The client was ecstatic about how well it turned out and the positive response they received from the general public.

These are the types of phone calls that we live for and are always over the moon when we receive such positive feedback from our clients.

We’re proud to have worked on this project with them, and always enjoy when we are pushed beyond normal requirements to try something new.