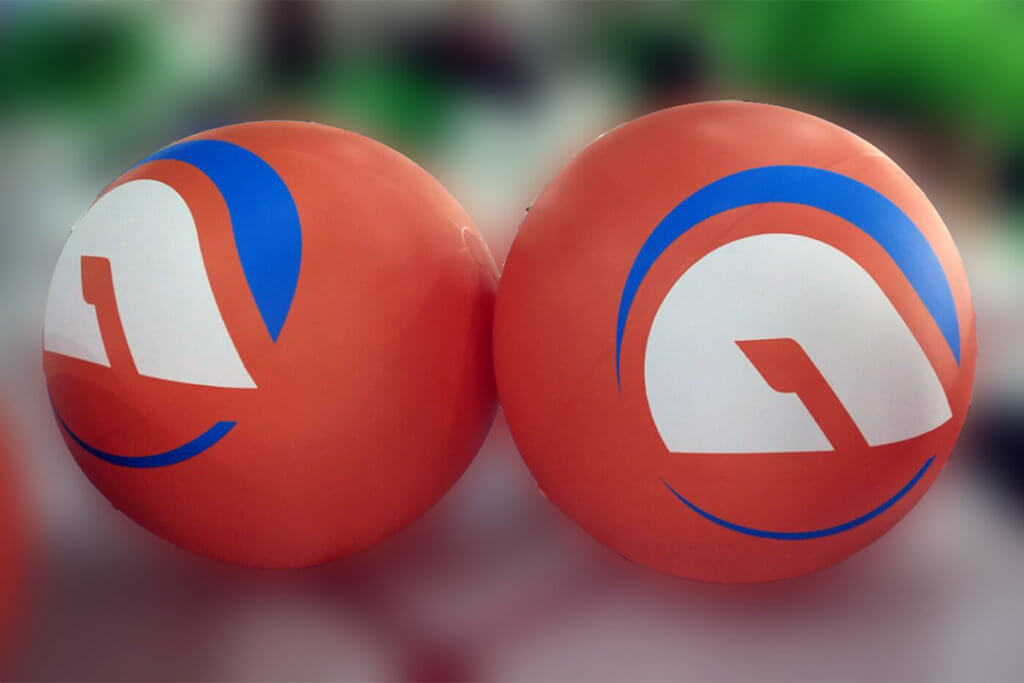 Netball NSW are the governing body for netball in New South Wales and they organise and manage two elite teams: NSW Swifts and Giants Netball. Netball NSW wanted a product that would help to get the crowds on their feet during half time while injecting an element of fun into the event.

The answer? Giant inflatable balls! You might have seen them being bounced around in crowds at some of their major games in recent years. They are a great way to bring crowds together to encourage their team’s players and also help to provide a fantastic opportunity to promote a business brand or message.

On This Page:
1 The Ball is in Our Court!
2 Getting the Ball Rolling…

The Ball is in Our Court!

Our design team set to work on coming up with an eye-catching design for the giant inflatable balls. The brief had to achieve a number of aims including promoting the Giants’ team and being big enough to bounce around in the crowds.

The giant inflatable balls provide great photo opportunities, creating lasting images from historic sporting events. These prove to be very effective in helping to add to building public interest in the team throughout the season, which also plays a part in boosting team morale on court.

The Giants’ logo is bright orange in colour making it ideal for standing out in the crowd. The main focus from there was for our team to create an exact reproduction of the Giants’ logo. It needed to be as bright and vivid as the real thing, in order to be easily recognisable and to stay true to the brand guidelines.

We used only the latest technology in its design and production processes which meant that they could produce the most professional looking inflatable.

Using a high-tech colour matching system called PMS (Pantone Matching System), we were able to replicate the vivid orange colour for all of the giant inflatable balls, as well as the splash of blue also featured on the logo.

Having got the colours absolutely spot on and happy with the overall look of the design, the team at Inflatable Anything presented their design to the client. This is always a nerve-wracking moment finding out whether we have interpreted the brief in the right way, but as always, we nailed it. Netball NSW were delighted with the look of the design and gave us the green light to go ahead and put the giant inflatable balls into production.

Getting the Ball Rolling…

It was important that we manufactured the giant inflatable balls in plenty of time for the Giants’ next sporting event. We have invested considerable time and resources into ensuring the production process is as professional, accurate and swift as it could be, so clients aren’t waiting unnecessarily for their inflatables.

It was a fine balance between maintaining our impeccably high standards of production and also getting the product out on time. We could safely say that we had definitely got the balance right, proven by all our previously satisfied customers! Netball NSW were no exception and were impressed with the time frame their giant inflatable balls were manufactured in.

Even though we couldn’t wait to present them to the client, we still gave the giant inflatable balls a thorough check over at our base, just to be 100% sure that they ticked all the boxes. There were five balls to check and all were perfect in quality and finish.

Thanks to the impeccable quality of our inflatables they can be used time and time again, offering unbeatable value for money. Why not have a think about how a giant inflatable could help promote your event, team, occasion, or launch? Contact our team at Inflatable Anything today.