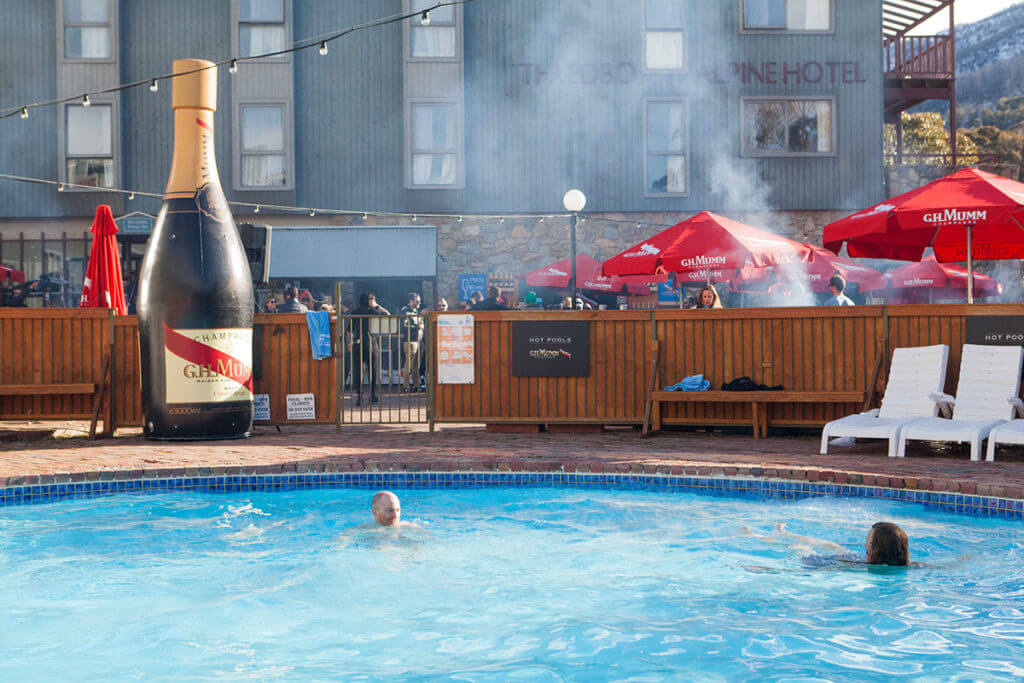 GH MUMM is one of the world’s biggest producers and distributors of champagne, the real deal from France. A core part of their marketing strategy is to run events and activations that promote engagement with their brand.

Champagne is globally recognised to be the go to drink for celebrations, so you can imagine the fun and bubbliness their events entail. These events are typically considered to be “parties”, but also do include special events at destinations such as Thredbo.

We were approached by GH MUMM and given the brief that they wanted to visually promote their brand more than usual at one of their upcoming events, and their concept was to have a few giant inflatable bottles to use at these events.

These bottles would provide not only a great visual experience for attendees, but would also be the central talking point among the crowd.

GH MUMM had an upcoming event at a ski resort and thought that some giant inflatable champagne bottles would be a great way for them to promote their brand.

We knew that we could help as we have had extensive experience at creating inflatable bottles and this is why they had contacted us to begin with.

The concept was very simple, to replicate their standard champagne bottle but scale it from only being X high, to being Y high, for maximum impact.

The customer decided to proceed with the concept after we provided them with a quotation so it was time to get to work.

The first step was to buy a bottle of champagne, and use that as a template to take measurements to replicate the inflatable champagne bottle in a 3D world on the computer.

We went ahead and purchased a bottle, and started creating the 3D from that.

This part of the process was relatively simple compared to the types of custom inflatables that we’re used to creating, but nonetheless it was important to get the details right because GH MUMM as a brand stands for quality, and it was important to represent their brand in the most realistic and professional manner.

One of the details we had to get right was the top of the champagne bottle, as well as the colours used on the bottle as the brand colours are an important aspect of their brand’s identity.

The client did not want to just have a simple finish on the top, and was adamant that we needed to ensure the top of the bottle was representative of the cork, as that was one the defining features of the bottle. We were sure to design the inflatable champagne bottle in such a way that the top would resemble the profile of a cork when inflated.

As the colours were also important, we did a pre-production print sample to ensure that they were going to print accurately to meet expectations.

We are experts in the manufacturing of custom inflatables and have previously completed many an inflatable champagne bottle Australia wide (or similar) for events.

This meant that our manufacturing department had no concerns they were going to be able to deliver the bottles for this client not only on budget, but in a reasonable timeframe.

For a project like this, the allocated time frame for manufacturing is typically around 2-3 weeks.

This includes the custom printing (as required for this project), along with the cutting, sewing, and testing of the bottles at their completion.

This project was completed just before the allocated deadline, and the manufacturing stage finished within the 2 weeks we estimated.

After testing the giant inflatable champagne bottles, they were ready to go to their new home.

The client had an upcoming event in Thredbo where they were using the bottles beside a pool during the day, and as centerpieces at night time events.

We think the inflatable champagne bottles turned out amazing!

We are glad to have worked with GH MUMM on this project, and are looking forward to future projects we will work on together.

We can custom make and deliver a giant inflatable champagne bottle Australia wide. Contact our expert team now to discuss your requirements and we will kick start the process.