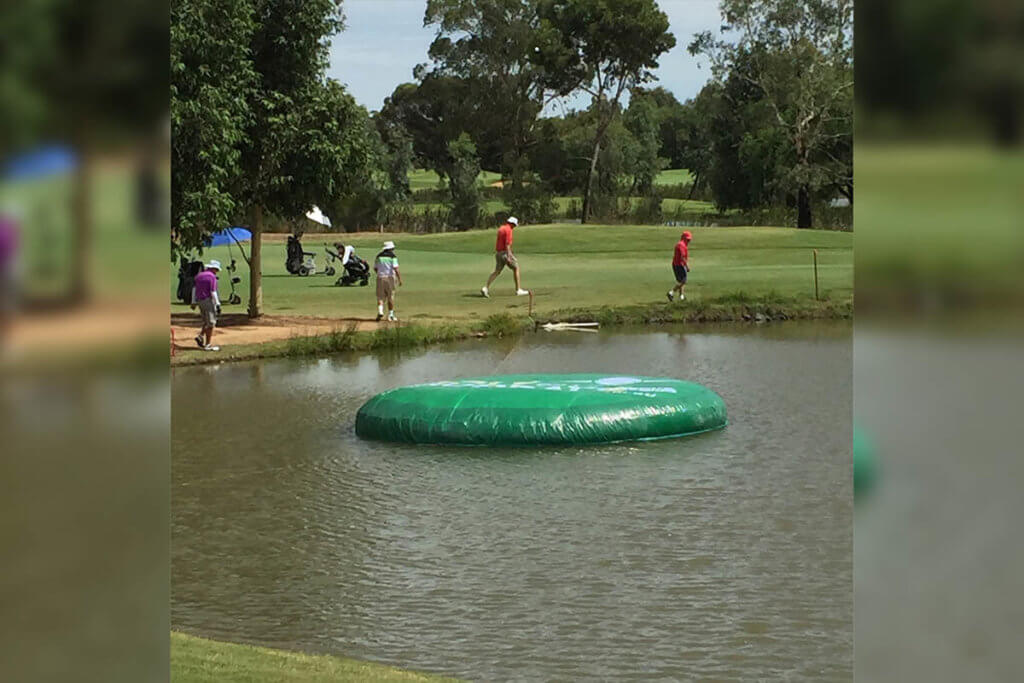 Rich River Golf Club Resort & Moama Sports Club in New South Wales, Australia contacted us with a really fun idea they had for an giant inflatable game that would help them generate donations at their charity golf events.

They wanted us to design and create a floating platform with a hole in the middle that could rest in a lake.

Golfers would then take a turn, aiming for the platform to see if they could get a hole in one.

As it would be floating it would be very hard to hit it, therefore there would be a good donation attached to anyone that could do it.

On This Page:
1 The Design
2 The Specifics
3 The Manufacturing Process
4 The Finished Product
5 Are You Looking For Something Custom?

The design concept for this inflatable was actually fairly simplistic. In our consultation with the Golf Club representatives, they needed the platform to be flat so the balls could roll the same way they would on a natural grass putting green.

They wanted a customised flagpole to show the spot where the hole is so the golfers could aim for it. They also wanted the platform to be in their bespoke club colours. They had brought with them an example of what they wanted, it was an image, sourced from Google, of a golf platform floating in a lake. It was a pretty straightforward task.

Once the concept had been created it was time to get down to the specifics of the giant inflatable game. The printed colour sample was made first. The client had given us a mock-up print of the design they wanted adorned on the top surface. It advertised, ‘Golf on the Murray’, the experience packages the club were offering.

This was laid out in the green and gold colours of their branding. It was important to the client that the colour scheme was correct, and that the shade of gold transpired well on the canvas.

Our client also requested their website be included for advertisement purposes so the public and those who took part in the game could find their package deals easily. Once we had the artwork complete it was time to move on to the manufacturing of the giant inflatable game.

In order for the surface to remain flat our manufacturing team decided that using a dual layer construction for the giant inflatable game would be the best option.

This meant creating an inner ‘bladder’ and an external skin to top over it, so the surface didn’t pillow or dimple, a golf ball getting caught in a rivet would ruin the game.

The dimension of the inflatable was 5 metres in diameter and 0.3 metres high, it was made to be able to float on the water. It was really quick to set up as it would only take approximately 5-10 minutes to inflate.

The major perk of having the dual layer construction means that should Rich River Golf Club Resort & Moama Sports Club need to change the design of the branding on the inflatable they can easily do so, by creating another skin.

This, in turn is a great form of marketing, should they want to advertise different deals or even events in the future - increasing the versatility of the inflatable and ensuring that they would get many years of use out of it.

We carried out a number of tests and checks to ensure the giant inflatable game would float, we also attached some metal D rings to the perimeter should they ever be needed to hold the inflatable in place.

Although this was a fairly simple design, we loved the finished product, it was bright, colourful and eye catching. We knew we had just created an entertaining game that would make a lot of people smile.

Our client was really happy with the finished product and couldn’t wait to get it on the lake so someone could have a go at their next charity event. Punters who successfully got a golf ball in the hole on the platform walked away with a prize, so it created some additional friendly competition on the green.

Are You Looking For Something Custom?

If you would like Inflatable Anything to help make your event a little extra special with one of our custom designed inflatables please get in touch with us today.

Generally, it takes a few weeks to bring our bespoke designs into existence. Our teams work tirelessly to make these one of pieces exceptional for our clients with the highest printing quality to breathe life into your idea.

Our trained professionals are also happy to sit down with you and brainstorm if you aren’t entirely sure what type of design you want but you know you want something a little different.