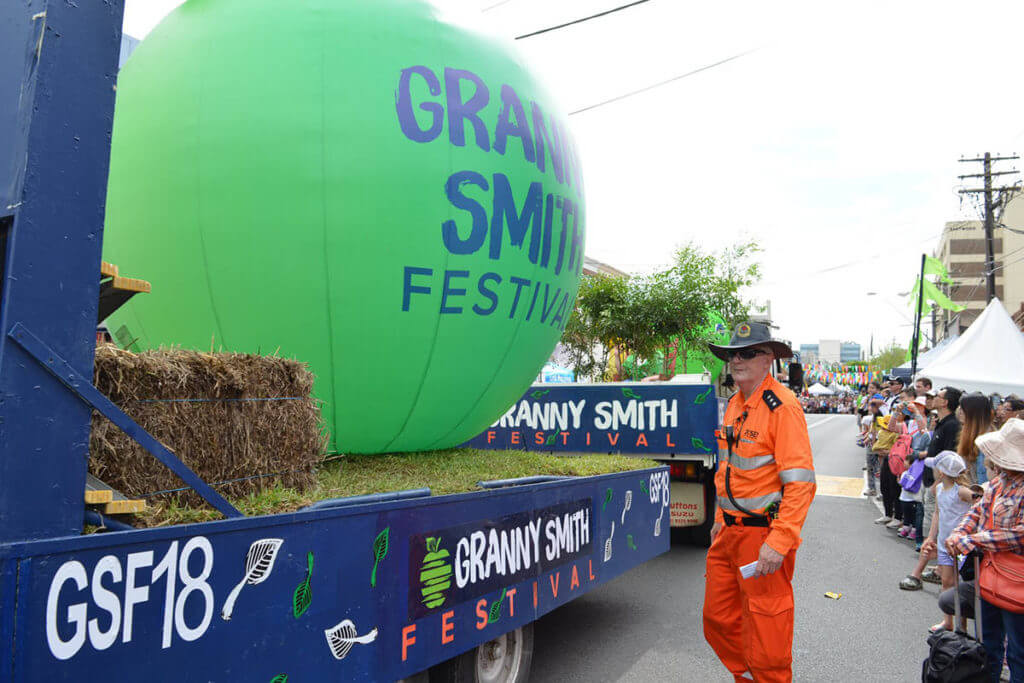 We’ve worked with the City Of Ryde several times over the years to create many different projects. We were contacted by their Events team for the upcoming Granny Smith Festival.

They had seen an inflatable apple made for Goulburn Valley and had the idea to recreate their own apple for their event. The brief was simple and straightforward; the apple needed to be green in colour and they wanted to include smaller details, such as the stalk and the leaf of the apple too.

We had completed many projects prior that were similar replicas of real products. Recreating a Granny Smith apple was a simple concept, so we had no problems in jumping right in to this project!

The size of the inflatable apple needed to be around 3 meters in diameter, and was going to be used on the back of a truck during a parade. Once the parade was finished, it was then going to be set up for the duration of the event in a fixed location.

For this reason, we recommended going with a sewn unit, which requires constant and regulated air flow. Contrary to common belief, this makes inflatables easier to use, and it helped this particular festival inflatable to stay looking amazing for the whole duration of the event. Sewn units also give us more flexibility with perfecting the finer details, in this case,  the apple stem and leaf, as requested by the client.

In general, we knew the shape and appearance of the apple was not going to be a challenge. It was basically a ball, but we had to put some internal structure inside the unit to give it it’s distinct apple shape, and allow us to do the stem and leaf in a more realistic fashion.

Our designer got to work on making the 3D model of the apple, and managed to complete it rather quickly as the clients deadline was fast approaching.

With no specific images to replicate, we had full design freedom with the festival inflatable. The client was mainly concerned about: the colour accuracy, the stem and leaf, and also having the writing on the side of the apple to advertise the festival.

We managed to nail the 3D shape and design on the first go, which then enabled us to move to the next phase; producing the template to print and cut the materials to make the inflatable apple ready for assembly.

When an inflatable is made, the 3D shape is converted into divided sheets of fabric that can be assembled into a final product.

It is not as straightforward as it may seem, to print writing on ball shaped inflatables, as there are many pieces that go together to make the rounded appearance.

Below you can see what the cut pattern for the inflatable apple looked like.

As you can see, the text is split across multiple panels. It takes a good eye and a lot of fine tuning when it comes to assembling the unit; making sure all the text edges line up to ensure it flows consistently across the entire apple.

Fortunately for us, we have some of the best inflatable manufacturing employees in the world. We were able to perfect this fine detail that many other companies would simply reject and tell you that you’d have to shrink down the text, or drop it all together.

Making The Inflatable Apple A Reality

We were given the green light to start on this apple around the middle of June, with the client’s event being in the middle of August.

We would normally tell a client in this circumstance that more time would be required, but because we’ve worked with the City Of Ryde several times, we didn’t want to let them down and said that we would be able to shuffle some things around to make it happen for them.

Our cracking team got on it right away as soon as they received the job sheet. We managed to complete this festival inflatable in what we would consider record time! As always, we send our jobs into QC to get checked and it passed with flying colours, then on to our packaging department to be prepared for delivery to the customer.

The inflatable apple was delivered to the client ahead of their event with a bit of time to spare (phew!), giving them enough time to do a trial run with the apple and ensure that everything was clear before their event.

Glad to say, the event went off without a hitch and the apple was extremely well received by the public and acted as a great talking point and symbol for the festival.

We’re excited to work with the City of Ryde in future again and look forward to the next challenge they can give us!

If you have any upcoming events and want to throw some ideas around for something new and completely bespoke, have a chat with our team today!