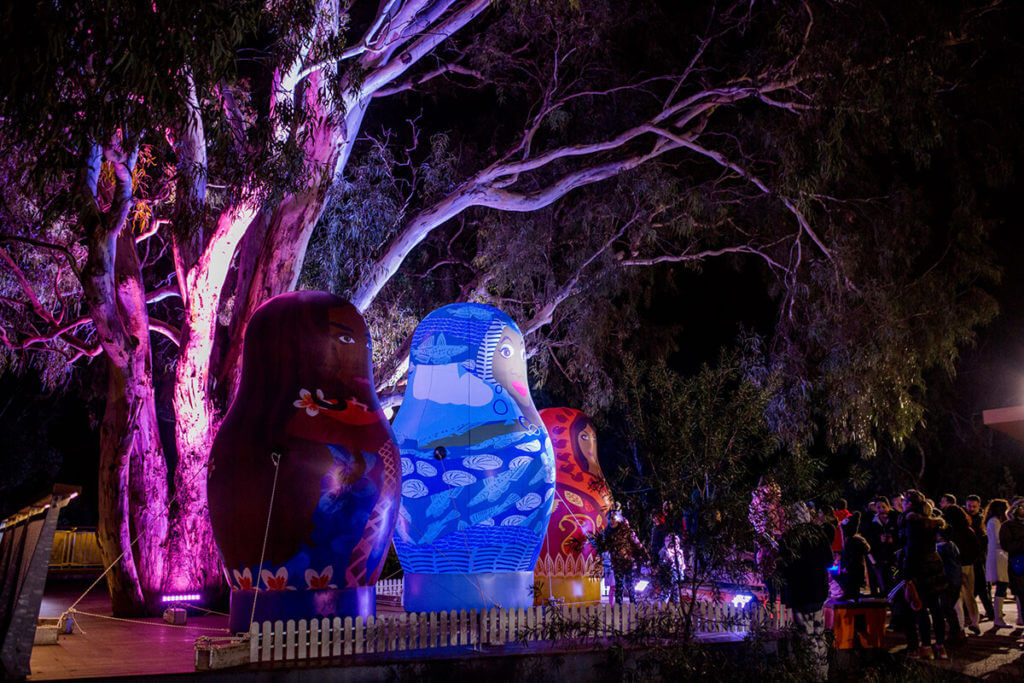 For this particular project, the council were after an inflatable babushka doll replica that was to be part of their annual Fromage A Trois event and were going to be used on display to promote diversity in the community.

They ended up going with three, with each inflatable babushka doll replica needing to be 3.5m high. They were also going to be lit up externally to give a really amazing effect at night events.

We often tell our clients that at this stage, there is no real design required as there is more conceptual work to do than anything else.

We usually request a concept draft or sketch, regardless of how simple you may feel it is, as we need to understand the general idea of what you’re trying to achieve, rather than the exact fine details.

Along with the general “shape” concept, we were also sent artwork that would be printed on the final dolls. Because all of our projects are bespoke, and we use digital printing, we were able to print the artwork exactly as provided in all it’s incredible detail.

After seeing the artwork, we were actually quite excited to get started on this project because it was a really impressive design and we knew it would look absolutely amazing when the printing was finalised.

The order of the inflatable event dolls was approved the the client and we got everything together and began creating the 3D designs of the custom inflatable as a starting point.

Once we got the basic shape together, the client prepared the artwork on the 2D cut sheet for the design.

The design was then confirmed and applied to the 3D model of the custom inflatables. At this point, it was more in line with what the final product would look like, bringing each inflatable doll character to life!

At this point everything was going great and the client was happy to sign off on the design on each inflatable babushka doll replica. So we got to manufacturing.

Once we have the 3D model complete and the 2D artwork applied, the process after this point is straight forward for our team.

We have manufactured hundreds of different custom inflatables over the years and know exactly how to turn what you see on the screen to something that’s very impressive in real life.

This project took a couple of weeks to print, cut, sew, and test, and once that part of the process was completed the inflatable event dolls were ready to send out the client.

Being in Melbourne, like ourselves, the transit time was not significant and Wyndham council had plenty of time before their event to test out the dolls and ensure the event was going off with a hitch.

As these were constant power units, the blowers were running the whole time they were being used, which allowed the setup to only take matters of minutes, and then after they were inflated just required tethering as per the engineering report they received.

The Inflatable Event Dolls in all Their Glory

The client hired an external company to set up the inflatables and they followed our instructions in weighting requirements to set up the dolls in a safe manner.

Each inflatable doll character was set up the morning of the event with plenty of time allowed to set up a perimeter around then to ensure crowd safety and also to ensure the safety of the dolls themselves.

As night came and the event started, it was as if each inflatable babushka doll replica took on a life of its own.

The babushka dolls attracted regular crowds, with people taking photos for posting on social media and promoting the council event. Safe to say our client was extremely satisfied with how they turned out, and the event went off without a hitch.

With quality results and high expectations, we have since partnered with Wyndham Council for a handful of their other events.

From the countless inflatable projects we have worked on across Australia, such as these babushka dolls, our capabilities know no bounds. If you have a similar idea in mind for your next event, and are unsure where to start, contact our team today to get started on a quote and organising a design concept.