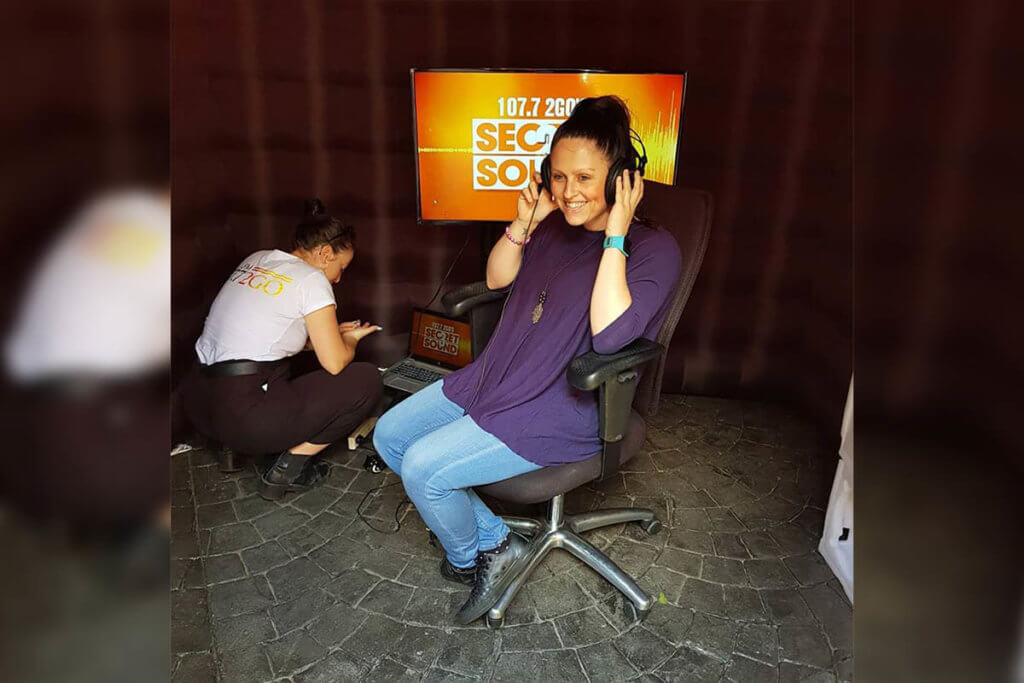 Southern Cross Austereo are well-known for the range of radio stations they run across the country.

One of those stations is 107.FM 2GO and when we were approached by them with an idea of an inflatable booth, we knew they’d have an interesting challenge for us.

What they wanted was an inflatable booth in the shape of a cube, to be used at events in shopping centres and other high-traffic locations around their local community.

This was to act as a booth for their ‘Secret Sound’ competitions, where members of the public would actually step inside, sit down, put on some headphones and listen to a particular sound. Then they’d have to guess what it was.

The custom inflatable cube had to be quick to erect, and very durable because people would be going inside. They also wanted the cube immediately or as close to immediately as we could do!

On This Page:
1 An inflatable booth
2 From 2D to 3D
3 The Magic Happens
4 Final Delivery & Use

With a tight deadline, our design team wasted no time in discussing with the client exactly how they envisaged the final product.

Although we’re always happy to assist with creating artwork, it was very helpful that they had already created a flat design showing exactly how they wanted the custom artwork on the inflatable booth to look.

Working together, we confirmed that the inflatable booth should be 3m x 3m: big enough to make a splash, but still light enough to be easily transportable and fast to set up.

We recommended that it should be made from polyester so that it was lighter to transport, with the walls being 40cm thick for strength, giving a total internal space of 2.4m x 2.4m - plenty for their intended use. In line with the clients’ suggestions, a standard sized door was added to the design, so people could enter and leave easily.

Once we had created the initial sketches to confirm what we were going to create exactly, we turned this into a formal design and presented it to the client for sign off.

After the sign off, it was off to our 3D modelling team to turn the simple flat 2D sketch into a proper 3D model to give a real impression of what the final inflatable would look like.

This is always the moment when the clients get really excited. They can finally see what their initial drawings will turn out like, in full colour reality.  The renders allow the inflatable booth to be viewed from every possible angle. This means that if the custom design needs adjusting for greater impact, it can be done at this stage.

The client was also intrigued to see that, when inflated, we had given the cube a ‘pillowing’ effect rather than flat walls.  While making it as square as possible, this gave it a cosy, inviting look.

No major changes were needed, and we were ready to move to the production phase without delay.

No challenge has so far proved too great for our production team, and they were ready to go the extra mile to meet the tight deadline.

First, the design of the inflatable booth was transferred from the CAD software to the printer.

Next, colour samples were printed to ensure that the colour of the inks would match the client’s branding exactly. Once they were satisfied with the comparison, and the colours were perfect, it was time to print the entire fabric.

This was then cut and stitched, and the production phase is almost complete.

But not really. Although it looked fantastic, that wasn’t quite the end of the story. It’s essential that every inflatable booth that leaves our factory meets our exacting quality standards.

So the next step was to inflate the cube and subject it to our series of rigorous tests.

As well as checking that it was well-balanced and stable, we wanted to be sure that it would take no more than 5-10 minutes to set up, with the blower running constantly.

We also note any details on the final product which may differ from the signed off brief. This can sometimes happen, and although the variations are minor, we always let the client know. After all, each inflatable we make is completely custom, and therefore it is the first time that inflatable is being made - so there can be variations from design to the final product.

In this case, everything was as it should be, so 107.FM 2GO’s inflatable booth was dispatched to their door without delay and within their deadline. Our team was on hand to support in case any advice was needed when they first used it.

They were absolutely delighted, and found it really easy to transport and use. Their Secret Sounds cube has since become a fun feature at their shows all over.