A Walk In The Park: Custom Inflatable Arch

/
Products
/
A Walk In The Park: Custom Inflatable Arch 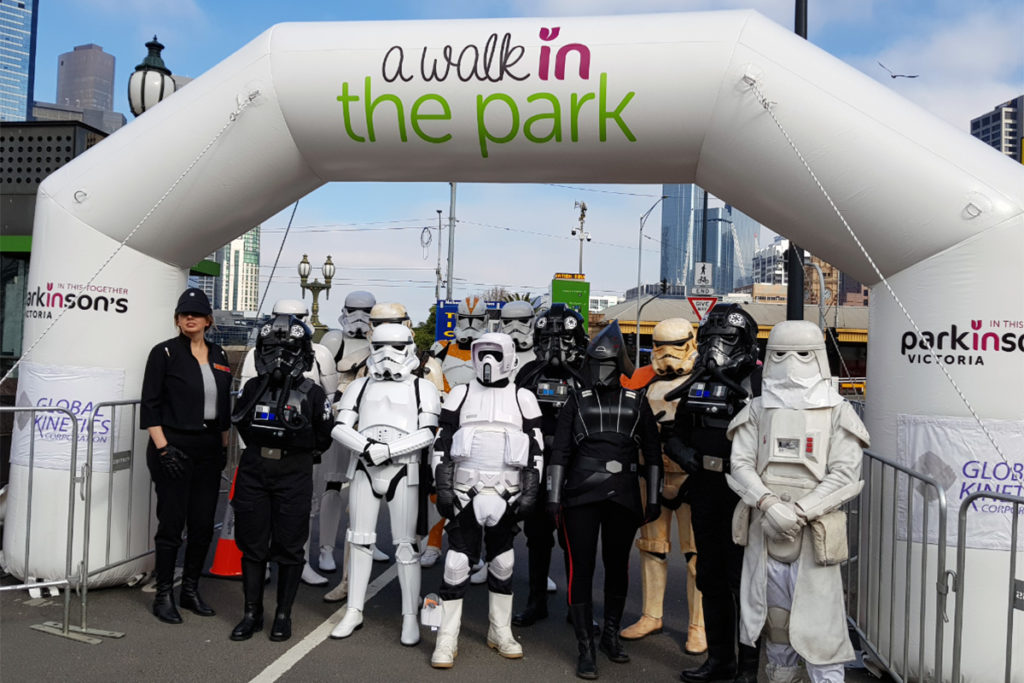 We were contacted by Bryony, from King Performance, a great client of our’s who had been a client for a number of years. King Performance had purchased a custom inflatable arch 3 years prior though Bryony and her team had recently come up with some challenges with their existing arch for WITP which the council were imposing on the event.

On This Page:
1 Why Another Inflatable Finish Line Arch Was Needed
1.1 Fine Tuning the Artwork
1.2 Safety First
2 Completing the Custom Inflatable Arch in a Tight Timeframe
3 Another Job Well Done

Why Another Inflatable Finish Line Arch Was Needed

The local council where the events had previously been taking place had recently changed requirements and because of these changes, their previous arch was too large (500x300cm internally) to fit the space. After some consultation and confirmation from the council, we worked out the inflatable finish line arch could be no larger than 400cm x 250cm.

Costs and lead times were confirmed, both of which lined up with budgets and the time frame leading up to the event. With details regarding the new size confirmed, as well as engineering requirements and all the details ticked off, we moved to making a start on the design changes and sent this over to the client.

Since we already had the artwork from the previous order, the process from here was very straight forward. One thing that can slow down the production of inflatable arches for sale, is artwork. If we do not have suitable format logos, the end result will likely suffer and lead to poor results, or potentially cause huge delays until they are available.

A newly supplied requirement was that the inflatable finish line arch MUST have Regulation 126 certification to pass safety for the council and be smaller to fit in the new space they had been confined to. With the location where the arch being used the area also had a maximum load rating , and due to the weights required to keep an arch set up safely, these fine details needed to be carefully calculated by our Engineer and solution found to ensure the custom inflatable arch could be used safely.

Completing the Custom Inflatable Arch in a Tight Timeframe

Usually inflatable arches for sale take around 2-3 weeks production after finalising artwork and approval, though with the event fast approaching, time was not on our side. This was no fault of anyones, sometimes life throws you a challenge. Being that this was a return client we put this job on our priority production list, as we didn’t want to let them down.

After confirming costs and working through the challenges, we were approximately around 9-10 days out from the event and production had only just got the green light. Our production team worked through the weekend to get the custom inflatable arch printed, and then sewn together ready for final testing late Tuesday afternoon. A feat within itself considering it was peak production time.

After these checks, the completed unit was approved and shipped to our Warehouse ready for collection. The inflatable finish line arch arrived late Thursday afternoon, a mere 36 hours before the event. As always, we did a final test to ensure that everything was as per the design, ensuring it met our high standards. Once thoroughly checked, we got this delivered to the site where the King Performance Team were already getting set up for their event the following morning. We had done it in the nick of time!

The inflatable finish line arch has now been used for a number of events each year, with the client returning to refresh banners as different sponsors come and go. Whilst this may have been one of the fastest Productions, it was only made possible by the organization of our team and the client. If things such as artwork were not available and it took 2-3 days for these to become available or payment was delayed, this job deadline would not have been met.

If you are looking for an inflatable archway, get in touch with our expert team today to discuss your event and we’ll be sure to work with you to incorporate a custom inflatable arch into your next event.