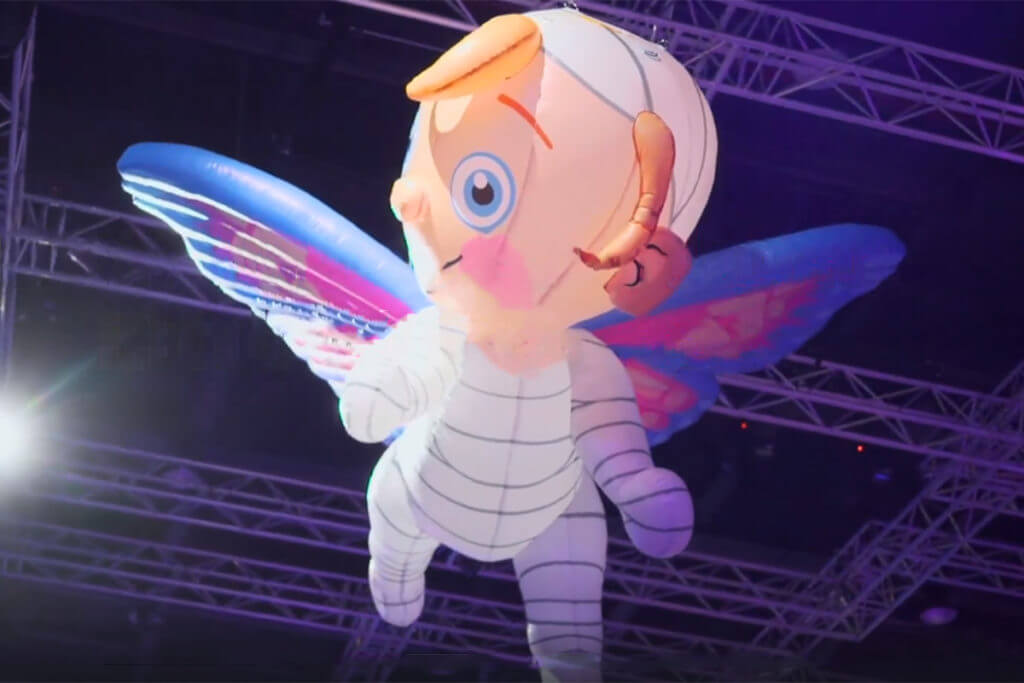 We were contacted by Prue from Little Red Caboose Productions to assist on an upcoming project she was working on; the Little Wings Ball. The proceeds for this event go toward the Little Heroes Foundation, which supports very sick children.

Prue reached out to us to help her create an inflatable cartoon character centrepiece for the ball, which would be transformed from it’s 2D version, into a physical 3D inflatable that was to be hung above the event and illuminated. We were able to do a very realistic replication of the cartoon and it was successfully used at the ball.

The Little Wings Ball was inspired by a young South Australian girl called Ivy, who was diagnosed with an incurable and very rare condition, known as Epidermolysis Bullosa. The Ball was run by Ivy’s parents Hannah and Steve as their way of saying thank you to the Little Heroes Foundation, for giving their family the support they needed most. The proceeds from the event went on to help fund the ongoing Little Heroes Care program to support other children like Ivy.

We were very proud to be involved in this project, and the ball managed to raise over $100,000 for the Little Heroes Foundation.

Turning a Drawing into a Life Size Mascot

We are often challenged with turning a drawing into an inflatable mascot replica, but it’s something we have extensive experience with.

We have completed similar projects in the past such as the Lacteeze Ice Cream and also a Dog Mascot for Subaru Australia.

The first step of the process is to get the “shape” of the inflatable cartoon character right. This involves taking the drawing and then imagining what the character would look like from all directions.

This is where the skill of our 3D designer comes into play. They basically have free reign to make the unit as true of a representation of the drawing as possible.

As we were working on this project, it involved some back and forth between ourselves and the client to ensure that the 3D model was actually a good representation of the drawing.

After several revisions back and forth, the general shape and feel of the inflatable mascot replica was agreed upon, which enabled us to progress to the next phase of the design process; adding the artwork and colour to the model.

Bringing it to life

Now that the shape had been confirmed, we had to now take the colours from the drawings and reflect them onto the 3D model.

This involved some creative work on our behalf. 2D drawings are generally only available from a single angle or perspective, whereas a 3D inflatable will obviously be viewed from all sides. Our team has to make assumptions and interpret what would be accurate colourations and designs for sides of the inflatable cartoon character which are not actually visible in the 2D drawing.

Fortunately for this project, the drawing was symmetrical and it was reasonably straightforward to extrapolate colours onto the faces of the inflatable that were not totally specified.

We managed to achieve a design that the client was satisfied with, and so the artwork for the life size mascot was signed off on for manufacturing to begin.

For this project, like many that we work on, there was an upcoming event deadline that we were working towards. Obviously when there is a hard event date like this case, we cannot let our client down and we must ensure that we meet that deadline no matter what.

Fortunately for us, our team are experts at manufacturing an inflatable mascot replica very efficiently. It was not just about starting on the manufacturing of this inflatable cartoon character quickly, but we put a special emphasis on this project given the importance of raising money for the Little Heroes Foundation.

The project was pushed to the front of our production queue and we completed the job ahead of our scheduled timeframe, which gave us plenty of time to do comprehensive quality control check on this life size mascot, ensuring it was 110% ready for the upcoming Little Wings Ball.

The unit was delivered ahead of schedule and ready to be used at the ball.

The way that we made this unit meant that it required constant power to remain inflated. While some people may not think it practical, this method actually enables us the ability to incorporate extra details into the piece, more so than if it were fully sealed (which allows for less detail).

The inflatable mascot replica was strung up on the overhead trusses high above the ball and inflated.

We were stoked with how well the unit turned out, and delivered exactly the impact that the client was looking for elevating the event to a higher level.

At the end of the night when all was said and done, the event managed to raise in excess of $100,000 for the Little Heroes Foundation, and we are proud to have played even a small part in making the Little Wings Ball a success.

We love every opportunity we get for working on a new project, as well as hearing of our clients success after their event. Organising a custom inflatable may seem like a whole new world, but we are there every step of the way, and beyond. Speak to our team about your big idea today!