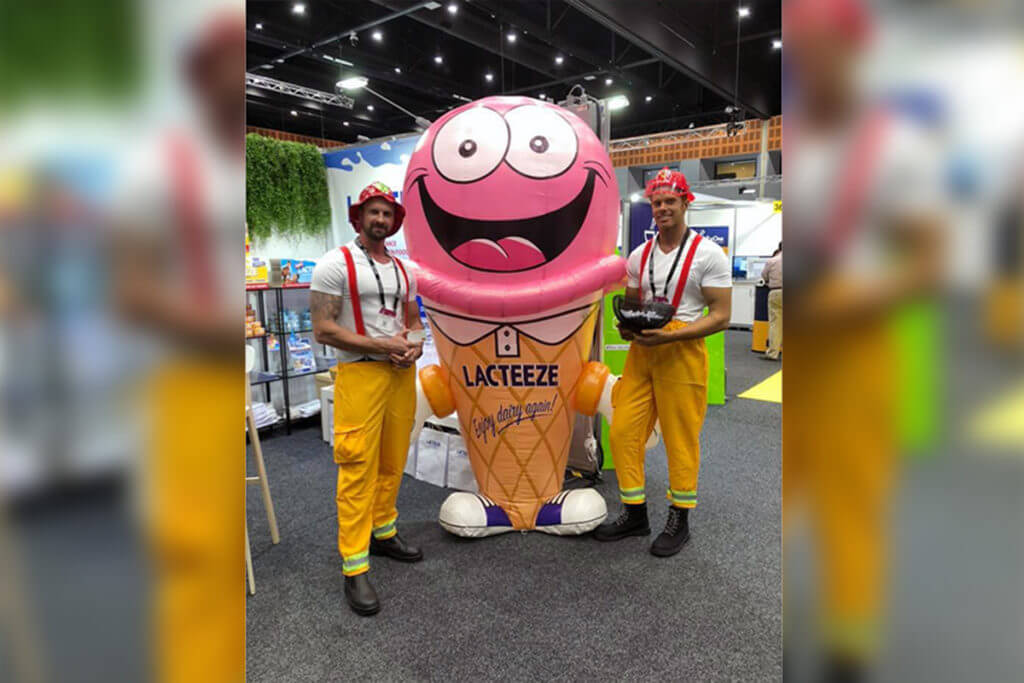 We were approached by the team over at Lacteeze because they were looking for a way to make an impact and an upcoming trade show they were attending.

The thought was that having a large inflatable ice cream replica of their mascot would be a good way to attract attention to their trade show stand, along with providing a photo opportunity for them to post on their social media accounts.

They contacted us to discuss the idea and straight away we knew that we would be able to help them take their concept from just that, a concept, and bring it to life as an inflatable.

On This Page:
1 Starting With a 2D Drawing
2 Modelling the Inflatable Ice Cream in CAD
3 Adding the Artwork to the Model
4 Manufacturing Starts & Finishes
5 The Trade Show Inflatable in action
6 Post Sale Modifications
7 Organising a Customised Inflatable for Your Next Event

Starting With a 2D Drawing

The first step was to take their mascot and change it up a little bit to be more cartoon like. Their original mascot did not have the arms and feet, but we added them for the concept design.

This hit the client brief and they were happy to proceed with an order and move on to the next stage.

Once the general concept was confirmed it was time for our designer to work on turning the 2D drawing into a 3D design that could then have artwork applied and be made into an inflatable.

The general shape was worked out first before any art was applied to it. We had some back and forth between us and Lacteeze to get the shape correct and hitting the mark as to what the client was looking for.

After several revisions of the customised inflatable, we were happy with the shape and it was time to move onto the next stage which was to apply the colours and artwork to the 3D model.

Adding the Artwork to the Model

Once the shape was confirmed and approved, we took the information from the 2D drawing, the colours, tones, shadows, and all other finer details to apply them to the 3D model and really bring it to life.

Once the artwork was applied to the model, that was the final stage before the client signed off for us to start manufacturing the inflatable ice cream. We received the signed off and were ready to move onto the next stage which was manufacturing.

We have a lot of experience when it comes to making customised inflatable mascots and this was another case where our expert team was able to deliver a great result that represented the concept and design exactly.

In what felt like no time at all, the team had printed, cut, sewn, and assembled the unit in a ready-to-test final product.

Prior to delivery to the customer, we set the unit up in our warehouse and tested it to ensure it would perform as expected. Everything appeared to work perfectly and the unit was then packaged ready for dispatch to our customer.

The Trade Show Inflatable in action

The upcoming trade show was approaching quickly and the customer received the inflatable ice cream prior to their event with enough time to test it before the event.

The unit was set up at their stall and they were able to use it for the trade show which they originally purchased it for.

The trade show inflatable was a great way to draw people into the stand and a great photo opportunity for both attendees and Lacteeze.

One thing that was overlooked by both parties was that the inflatable ice cream would sometimes need to be used freestanding in a field, and due to the nature of the design of the unit it was top heavy meaning that it required some types of support behind it to stand up.

For this particular trade show, setting this up was not an issue, because there was a wall behind that the unit could be rested against, but for outdoor field days and events a different solution was required to allow it to free stand in a field.

To address this new request, we went ahead and developed a pole and base solution that utilised the D rings that were originally built into the unit for ropes, but fitted poles to them with metal bases that allowed the unit to stand by itself in an open field.

This is an example of where every inflatable is completely custom, and from the very beginning all use cases and applications need to be considered because otherwise they will not be designed into the unit. In hindsight, it’s pretty clear that the inflatable would have been a support / base at the bottom if it needed to free stand, but this was not a consideration at the design phase and was therefore not included.

This is why we require detailed briefs from clients so that we can ensure units can be made exactly as required for all uses.

Organising a Customised Inflatable for Your Next Event

We really enjoyed being a part of this project for the trade show inflatable ice cream. Each job we do is unique and it expands not only our portfolio, but our experience with the different needs and requirements of our clients. We do our absolute best to think of everything, so you don’t have to!

If the inflatable ice cream has inspired you to think big for your next event, speak to our team today and we can take your ideas to the next level.