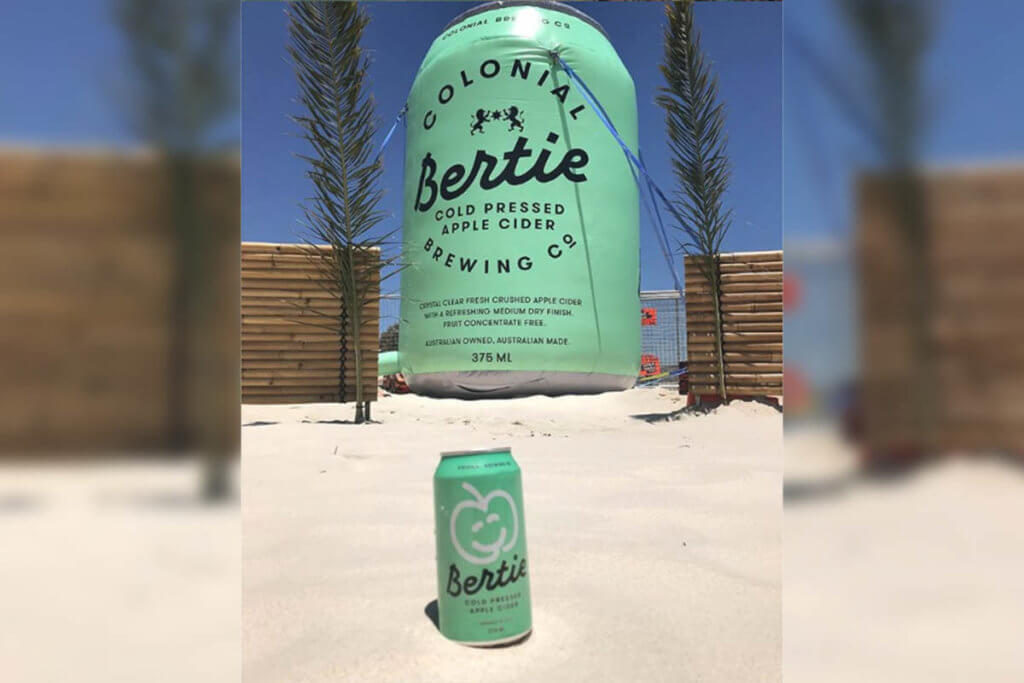 Our friends from Colonial Brewing Company came to discuss creating a promotional inflatable cider can for them to use at marketing events across New South Wales, and greater Australia.

They got in touch after seeing an image of a giant inflatable Coca-Cola can online. It was so eye catching and they thought, ‘wow, we’ve got to get one of those for ourselves!’, so after looking through our portfolios at previous projects they contacted our team for a consultation.

On This Page:
1 The Concept
2 The Mock-Up
3 The Manufacturing Process
4 Delivery and Feedback
5 Get Your Own Custom Inflatable

Colonial Brewing Company brought along a can of their Cider as well as the image of the giant inflatable Coca-Cola can.

They had seen the picture online and thought that something similar advertising their range would be a great promotional prop for their brewing business. They wanted us to create an inflatable replica of their Bertie Cider Can, as it was a unique colour and they thought it would make an awesome marketing tool.

The cider labelling was so aesthetically pleasing we couldn’t wait to see a huge version of it. Once we had figured out the best material and decided on costing, it was time for our design team to configure a mock-up version.

The main challenge with the artwork was ensuring the colour scheme was accurate.

The example product provided to us was a inflatable can of Bertie’s Cider and the colouring was a very pale pastel green. For marketing purposes, we had to ensure the colour to be the exact same, so the brand was recognisable instantly. This was important for our client.

They wanted the general public to see this inflatable can in passing and catch their eye so that a can of the cider in a store could be instantly recognised as the same product.

Our team wanted to replicate the label exactly with all the packaging information and even went as far as to recreate the lip of the inflatable cider can to make it as realistic as possible.

Our design team took the dimensions of the real cider can for scope and scaled it up to ensure that the artwork would remain accurate when enlarged.

Once the artwork was complete it was passed over to our talented manufacturers to bring the replica inflatable cider can to life.

The final inflatable cider can would measure 4 metre in height and approximately 2.5 metres in diameter, ensuring that the inflatable would really draw attention with its sheer size.

The lip of the can was added on the top and added a little extra authenticity.

Due to it being a constant air unit, the inflatable cider can would only take around five to ten minutes to set up, the blower and blower tube would be at the rear of the inflatable so it could be easily hidden.

There was also a flap at the bottom of the inflatable where air could be released making it quick and easy to deflate. This was helpful for our client due to the time constraints associated with high profile marketing events. Setting-up and clearing down needs to be as quick as possible at rented venues to reduce costs.

Our team all ended up being really proud of the end result, the colours matched perfectly to the original product and the sheer size was impressive.

It was a fun project that had beautiful artwork that we were so glad we could replicate in a giant inflatable.

The colonial Brewing Company were delighted when we shipped the inflatable cider can off to them without delay. They even sent us a great shot of the inflatable at an event on the beach, with the original can resting in the sand and our blown-up model in the background.

As is always recommended with inflatables, especially those being used outdoors, they had secured the inflatable with rope so that it was safe and wouldn’t get blown over on a windy day.

A lot of consideration must go into each of our products to ensure they are safe and secure in any environment or location. It is always really satisfying when we get pictures of our creations in use.

Colonial Brewing also mentioned that they had lots of passersby taking photos of the inflatable cider can and promoting it on their social medial accounts. Inflatable are the perfect addition to a social media campaign because they are so impactful and photo worthy.

Get Your Own Custom Inflatable

If you have a design concept you want to inflate please do not hesitate to contact us here at Inflatable Anything.

From cans, bottles, arches and animals we do everything we can to live up to the expectations of our clients.

Our talented teams are on hand to help with any design and rise to the challenge when creating something totally new.

We use the highest quality materials and printing tools to ensure your product matches the original idea perfectly.