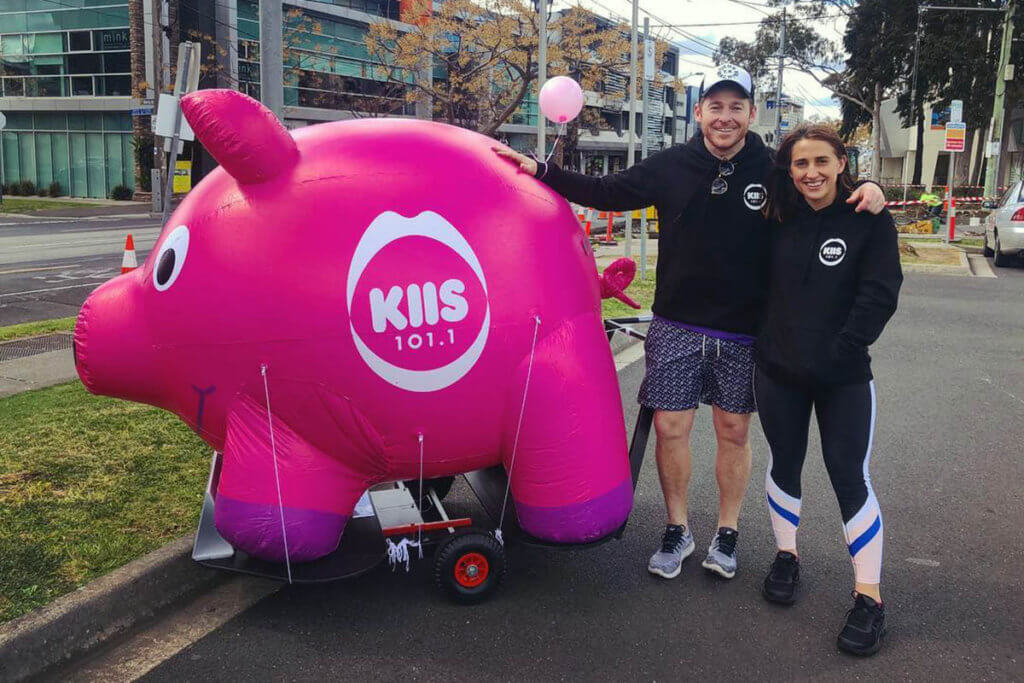 We’ve worked with KIIS FM, aka Australian Radio Network, on a number of projects so far and recently they approached us to discuss an upcoming promotional campaign they were running to help a donation appeal.

The concept was that they were going to walk across Melbourne, and raise money along the way. To attract the attention of passers by, they wanted to get a giant inflatable pig custom mascot made with their logo printed on the side. This was sure to be an attention grabbing item, and would help them raise the money and awareness they needed to.

Of course, we said that we could help out.

From an idea to a 3D design

The idea was to run an activation and replicate the pig into a large inflatable and that would be sat on a cart that could be wheeled across Melbourne. The brief was that the big needed to look like a “piggy bank” pig, rather than a real pig. With the idea being that people could donate into the piggy bank, as it passed across melbourne.

The shape was straightforward for our 3D designer to create because we worked from an existing model we had on file of a piggy bank.

The only key step that we had to take was to make the pig look more “friendly” and also be branded with the KIIS insignia.

Bringing the inflatable pig to life with printing

Once the general shape and design of the piggy bank was agreed upon with the client, the next step was to actually apply the branding and printing to the 3D object so that we could get a clear picture of what the final product would look like.

KIIS has a specific pink and purple colour that makes up their brand / logo and that was the guidance that we would use to brand the inflatable pig.

The main body of the pig was to be pink, with a cartoon face and purple feet. The KIIS logo would be applied to the side of the pig to ensure that the brand was not missed during the fundraiser.

The client was happy with the branding of the pig and the job was signed off on to start production.

We have a crack team behind us for manufacturing and as always our team was able to take this job by the horns and deliver it with our standard expertise, skill, and speed.

The job was passed from our design department to our manufacturing department and they got right on it knowing full well how important it was to ensure that we delivered on time, as usual, for the fundraiser.

The team started right away and printed the artwork, and got to cutting and assembling the unit.

Within days, the pig was ready to be shipped, and in the QC phase of our manufacturing process. We were extremely happy to see it progressing so quickly because we definitely wanted to help with this important cause that the pig was being used for.

The pig was finished, packed, and shipped to the client ahead of the event!

Delivery & Use Of The Inflatable Pig

The client received the pig the day of the event. It was tight, but we made it happen, as usual. Sure, we have to turn the world upside down a little to make it happen, but we did it.

As soon as the client received the pig, it was set up by the event staff and put onto the cart ready for Jase and PJ to come and start wheeling it across the city.

And so, the pig started it’s journey across Melbourne. The whole time, Jase and PJ were broadcasting on the KIIS about their adventures and encouraging members of the public to donate to the worthy cause.

We are proud to announce that by the end of the event, they had walked all the way across the city of Melbourne and managed to raise in excess of $85,000 to assist Teresa with her expenses that arose from her illness.

We were very proud to be involved in the event and we were happy to have delivered the pig in time, and on budget, and contributed even in a small way to the raising of so much money for such a worthy cause.