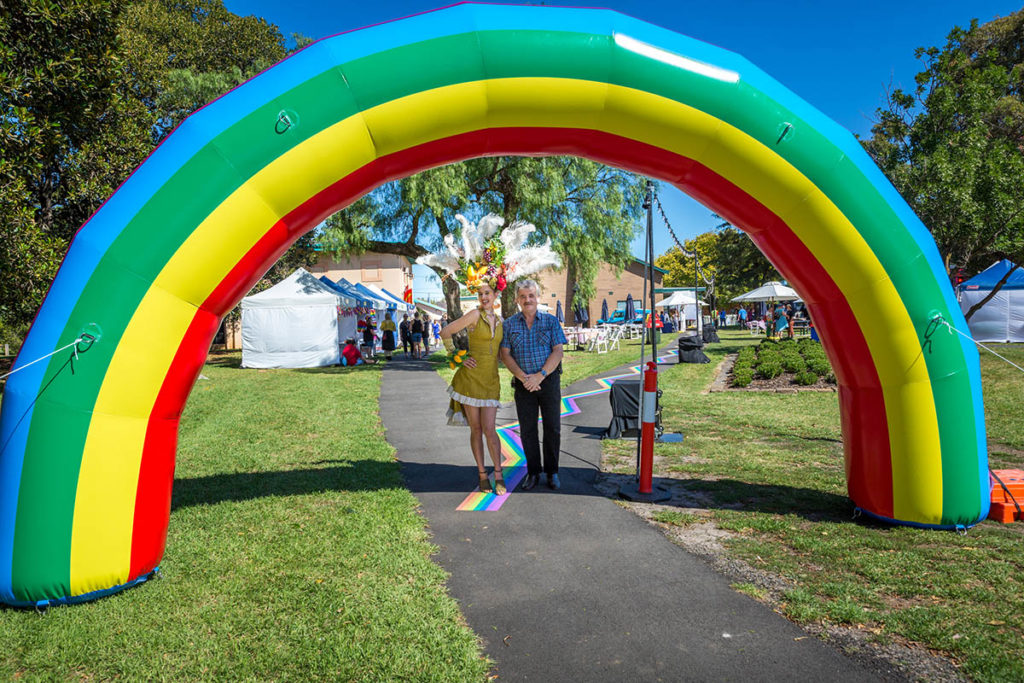 The lesbian, gay, bisexual, transgender, and intersex community has had to endure a long struggle in Oz, with many laws banning relations between people of the same sex still being officially on the books as late as 1991. To celebrate their resilience and accomplishments over the past few decades, the marketing team at Wyndham City Council commissioned an inflatable rainbow arch to help promote inclusivity in its governing area outside of Melbourne.

Here at Inflatable Anything, we take great pride and pleasure in helping to celebrate the beautiful diversity within the communities we serve. The thing about using structures such as this inflatable rainbow arch for events is that it normalizes not only tolerating but embracing the different characters around you, and that is something to be admired. We were beyond honoured to be asked to help out on this project!

On This Page:
1 Wilkommen, Bienvenue, Welcome!
2 Viva La Vie Boheme
3 Something to Point to
4 Defying Gravity

Since the late 1970s in San Francisco, the rainbow flag has been slightly modified and used to represent the diversity of the LGBTI community, with the Aussie community adopting the symbol shortly after in the 1990s.  Because of this well-known cultural association, the client knew exactly what they wanted. For their inclusive series, they wanted a simple arch, big enough to walk through and pose with at events, in the seven colours and shape of a rainbow. This clarity made the process from approving a design to our team working out the details of construction pass by without a hitch.

After our many years of experience, we knew how a bold structure like this inviting, inflatable rainbow arch would look best. With the vivid colouring our experts know how to achieve, we were sure to provide the client, and the Wyndham LGBTI community, with the perfect solution. To apply this design, we used our inkjet printer. It can achieve more saturation because the ink can be distributed all at once instead of in sections.

Beyond the colour scheme, we also had to figure out how best to get a rounded shape for this inflatable rainbow arch. Now, don’t get us wrong. We’ve perfected the construction of this kind of inflatable at this point in our business. However, the arches we’ve made in the past tended to be more angular, so we had some planning to do. We never back down from a challenge, though!

Something to Point to

The client has ensured that their actions over the past few years have aligned with their desire to openly and enthusiastically show their support for the LGBTI community in their Victoria district, and they have absolutely no plans of stopping anytime soon; in fact, they’re always looking to support the people in their governing area as best as they can. Armed with this information, we knew we had to make an inflatable rainbow arch that would really stand the test of time.

One of the strongest materials we use in our manufacturing is polyvinyl chloride, more-commonly known as PVC. Not only is it resistant to abrasion and most chemical damage, but this material is also extremely versatile and easy to mould to achieve the shape you want. Another advantage for using this polymer, especially for this particular inflatable rainbow arch, is that PVC is lightweight and very easy to transport from one inclusive event to another.

Standing at 2.5 meters high and 4.5 meters wide, we decided to construct this rainbow out of 100% PVC panels, sewn and fitted together in sections to avoid the rigid, squared shape we usually end up with for our event arches. As you can see, this material decision also gave the colourful arch quite the pleasant, glossy finish as well!

These LGBTI inclusive events, the latest of which was for the International Day Against Homophobia, Biphobia, Intersexism, and Transphobia, have been huge successes. Not only is it great that the client has been able to meaningfully engage with the people in their district as a governmental entity, but it’s also serving as a way to bring awareness and acceptance between all members of the community together. We are thrilled to think our inflatable rainbow arch helped facilitate those bonds.

This particular job went over so well that Inflatable Anything has partnered with Wyndham Council several times since, because they know they can trust our commitment to customer support and care.

Contact our team today to see how we can help you foster connections of your own, big or small!