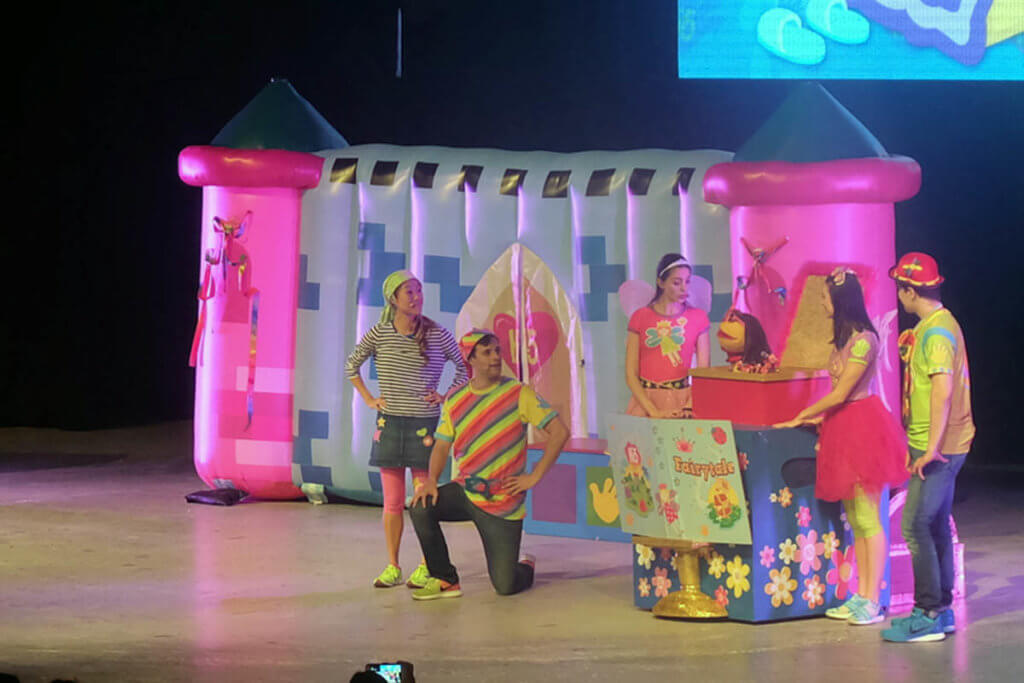 Hi5 approached us after having seen some of our other inflatable stage props with other groups and wanted to discuss the idea of having one of their stage displays for an upcoming show get made.

We had extensive experience with stage displays, and therefore we said we would love to get involved and help them with their stage prop.

Inflatables are particularly well suited to stage displays as they can get very large, and can do that at a very reasonable price. Not only this, but they can be set up, transported and packed up in only matters of minutes, as opposed to hours that it might take a traditional stage display.

On This Page:
1 Turning an artist sketch into reality
2 Turning the drawing into a workable design
2.1 Adding in the door
3 Production & delivery of the inflatable stage prop
3.1 Receipt and use

Turning an artist sketch into reality

The brief of the project was basically that Hi5 had an existing castle design that they used in their print media for advertising and drawing, and wanted to turn that into a real life castle wall as inflatable stage prop in one of their shows.

The castle was relatively simple, in terms of being a wall with two turrets, but one key point that Hi5 wanted was to have a door in the centre of the wall through which the performers could actually burst out on stage.

That was not going to be an issue as we had done similar doors for other projects like sports tunnels and arches where sports teams would run through the doors. All we had to do was to design the door into the “base” unit, and then we would use velcro and some sewing to fit a door into the space.

Turning the drawing into a workable design

Once the project and its budget was approved by the client we got to work on creating the 3D model of the inflatable stage prop.

The design phase was straight forward but there was one key detail that was not going to be able to be achieved as an “inflatable” which was the two flags on the top of the turrets.

We came up with a solution for this by creating a pouch in the tops of the turrets where we could actually fit in normal flags on poles.

This was actually an extremely well received solution from the client because it meant that they could in future change the flags to match the different events they were running.

Adding in the door

The next step prior to the manufacturing was to add in the door into the design of the inflatable stage prop.

The door was just sewn into the edges of the opening left for it, and had a velcro strip going down it’s centre that could be opened and closed as required by the customer.

The door was also where the Hi5 logo was prominent, so we had to take special care and attention in making sure the two edges of the door lined up perfectly so that the logo would look correct when closed.

As always we delivered and when the door was installed and closed, it displayed the logo perfectly.

The unit was completed and ready for testing well ahead of the clients first upcoming event.

As with all custom inflatables that we produce, the unit moved from our manufacturing stage to our quality control stage. At this point we check all of the printing and assembly of the unit, as well as inflate it for the first time and make sure that everything is working as expected.

Unsurprisingly, the unit passed the QC phase without issues and it was packed up and prepared for transport to the customer.

After only a couple of days after we dispatched the unit, Hi5 received their inflatable stage prop.

The unit was then flown to Singapore to be used on tour and their first event came, and went, and the unit functioned without issue.

We received positive affirmation from the client after their show and said they were extremely happy with the wall and were actually considering to buy a different prop for the next show that was coming up!