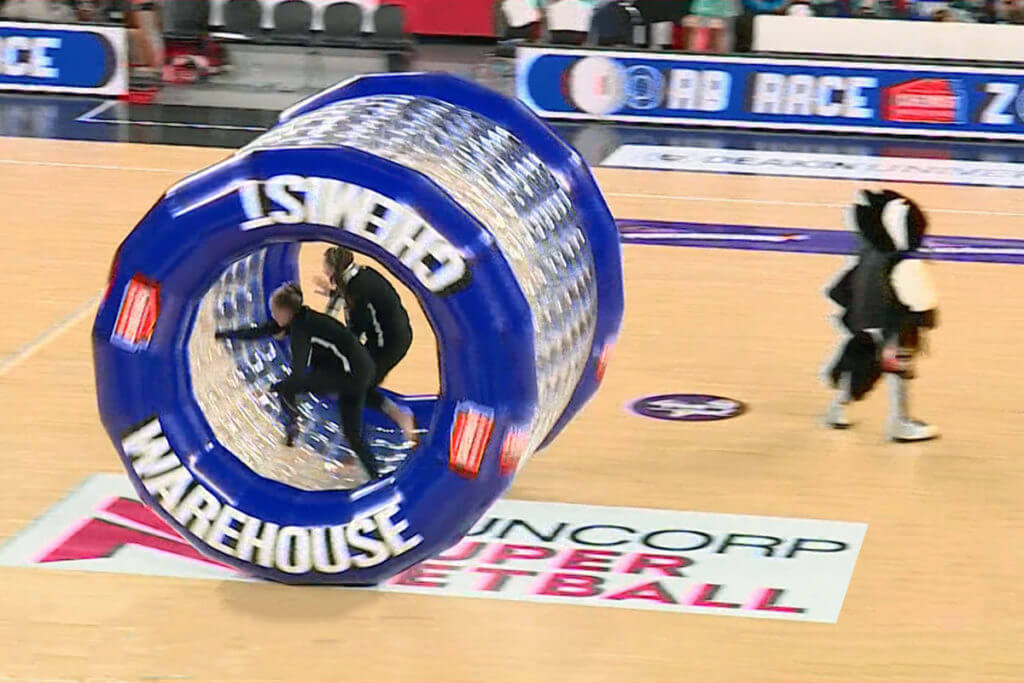 Recently we worked with an agency, Max Events, that was working for Chemist Warehouse managing their activations.

Their client was looking for interactive game inflatables to use at intervals during a number of sporting groups whom they sponsor. They settled on the idea of an inflatable zorb tunnel, which would provide that sense of fun and engagement with the audience, as well as the ability to draw attention to their brand.

The overall concept was to produce two zorb tunnels, which event attendees would race backwards and forward over a netball court initially during half time entertainment across the country.

This project certainly had its risks. As you could imagine, coming flying out an inflatable zorb tunnel at speed onto a hard surface has the potential to cause serious injury.

Before we got started on these activation inflatables, we really needed to ensure that they had all risk mitigation processes in place and that safety was their priority. Things that needed to be considered were:

The Team at Max Events run these activations for the client, and were receptive to this information and accepted the risk

After the order was approved and we received the purchase order, our 3D design jumped on this job right away to start to create the 3D shape of the inflatable.

As with all projects, these are bespoke inflatables and each time we start a new job, we actually need to create the shapes from scratch to meet the client brief. We don’t have any “off the shelf” designs that we can refer to, rather, we create each design on it’s own.

The most important part is to get the shape, size, and general feeling of the project correct, and then after that we work to apply the colour and printing on the surface to really bring the unit to life.

Overall the actual shape and design is quite basic, though this inflatable zorb tunnel has quite a bit of internal structure to ensure there was an air pocket for people to run on.

Adding Colour to the Artwork

With the overall design concept locked in, we moved to adding colours and the client logo along the edges of each inflatable zorb tunnel.

The client was very particular on the colours used in the printing and specified very specific pantone references. Pantone references are important to ensure colour conformity and that colours match other parts of the activation.

After a quick review of logo placement, Max Events gave us the green light to start production.

The activation inflatables now moved into the manufacturing phase of this project.

We had to set ourselves a very strict time frame to ensure the inflatables were produced in time for the first game of the season.

Our team pressed ahead and did their magic by printing the artwork, cutting the pattern, and then assembling the two tunnels into their final shape, including all the internal structure points to ensure the air pocket worked correctly.

Due to the intended use case for these inflatables, it was very important to ensure that they were sealed correctly and that there were no leaks. Each of the tunnels were setup and left for 24 hours, which passed with flying colours.

We were very satisfied with the outcome of the manufacturing and after our extensive quality control and review process, each inflatable zorb tunnel was packed up and loaded into the car for delivery to the client, who was conveniently just around the corner from us.

The event was the following day, and we did not want to risk these getting caught up in transit, when they were literally 2km away.  We definitely like to ensure that the inflatables are not one of the major things our clients need to stress about for their upcoming events, so we make working with us as easy and seamless as possible going the extra step wherever needed to ensure the deadline is met.

The zorb tunnels were used at the first game of the season and even made it onto TV! It’s a great feeling seeing your hard work and effort paying off!

We love hearing from our clients to see how they are going and what challenges they faced.

Being that these were actually being used all over the country, by both Football, Netball, and Rugby clubs for half the time, these activation inflatables racked up a fair amount of frequent flyer points. Though due to some mishandling of them during transport, they ended up getting some small holes, which for a sealed unit like the inflatable zorb tunnel, it usually means game over.

We reiterated to the client that repairs for these are usually recommended to be done internally, as the patches would get caught and tear off, making things worse. With only a handful of events left scheduled for the year, Max Events took it upon themselves (with our advice) to patch a couple holes, which luckily lasted long enough for them to get through the rest of the events.

If you are looking for some inspiration for a series of activations or events for your business, our team will be more than happy to share their knowledge and get creative with you. We can work towards your budget and supply you with design concepts to get you started.

So, what are you waiting for? Get in touch today!