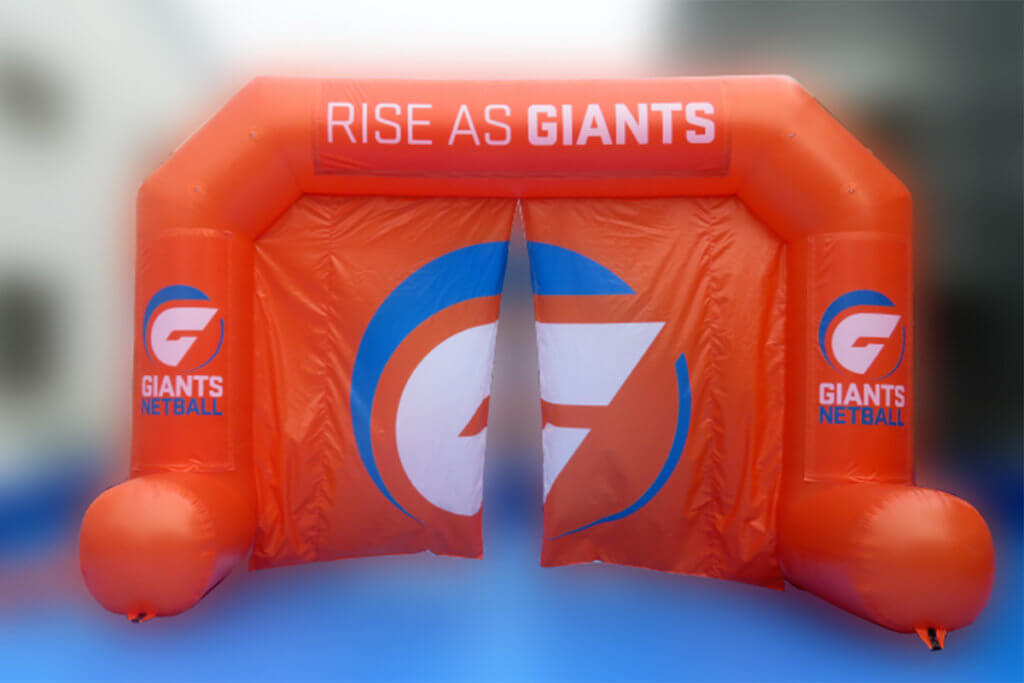 When you are a professional netball team like the Giants of New South Wales, then making a grand entrance in front of the crowds is not something to be taken lightly. As we were also making their inflatable balls for crowd entertainment, Netball NSW also turned to us for a self-standing inflatable arch, trusting that our years of experience with creating custom inflatables would give them the eye-catching entrance they were looking for to start their netball games.

After initial discussions with our client to determine what they had in mind, and where and how they imagined seeing their bespoke inflatable come to life, it was agreed that a customised inflatable arch that could be used for both indoor and outdoor sporting events was the best option.

On This Page:
1 Streaks Ahead
2 Signs of Success
3 Rising to the Challenge

The T-frame used in the design of this self-standing inflatable arch is already well tried-and-tested, which gave our team the chance to show-off their refined skills in standard design and manufacturing processes. Since we are known for creating custom inflatables that breathe life into any brand, Netball NSW felt confident to add a dash of flair and excitement to their project brief by requesting two additional elements for their self-standing inflatable arch: a run-through banner and a removable banner.

The run-through banner essentially functions as a curtain hanging down from the top of the inflatable arch with a slit down the middle through which team members can run. It was important for the banner to offer no obstacles or risks to the players running through so its edges were sewn to the arch rather than being attached by means of Velcro or zips. The banner was the same striking orange as the rest of the inflatable arch and printed on both sides with an extra-sized NSW logo filling for spectacular effect.

The 3m high by 4m wide dimensions of this self-standing inflatable arch also ensured that the Giants had plenty of space to run through the banner and onto the playing field to fire-up their supporters.

As requested by the client, the full surface of the Netball NSW self-standing inflatable arch was printed in their brand-specific orange colour. Matching the colour of an inflatable product to a client’s signature colour is something we pride ourselves on, which is why we used colour samples in this project to ensure consistency between the arch and the Giant's branding.

At Inflatable Anything, printing the entire surface of an inflatable has become second nature for us, as is adding custom logos and text to ensure the visibility of client branding. In this instance, the logos were printed onto removable banners and attached to the legs of the inflatable arch with Velcro. This provides our client with the option to change the branding in the future, which can become a requirement when different sponsors need to be represented.

Our success as a business lies in paying attention to details like this, using inventive solutions to deliver custom inflatables that are versatile and robust.

Standing the Test of Time

In the design and manufacture of bespoke inflatables that do not have a standard shape or design to fall back on, we usually create a 3-D model in addition to the 2-D artwork. As we were using an inflatable arch as the base structure in this project, it was only necessary to draw up 2-D artwork to ensure that the dimensions, trimmings, and colours of the custom inflatable met the client’s requirements as well as our own standards of delivery.

One advantage of any integrated T-leg archway design is the stability. The self-standing inflatable arch takes this stability a step further by attaching to the ground by means of a single rope that connects to a D-ring on one side of the arch. This simple mechanism always keeps the arch in contact with the ground. In just over 10 minutes, our client can set up this reliable self-standing inflatable arch and have it ready to use as an impressive entranceway adding excitement and prestige to any of their sporting events.

Rising to the Challenge

We have years of experience customising inflatable arches to meet the branding, promotional and entertainment needs of our clients. Self-standing inflatable arches are excellent for use at both indoor and outdoor events, offering ease of use, stability, and reliability. Give us a call to discuss your next design- even if you think your idea is off the wall! Our team at Inflatable Anything would love to have another opportunity to live up to their name.