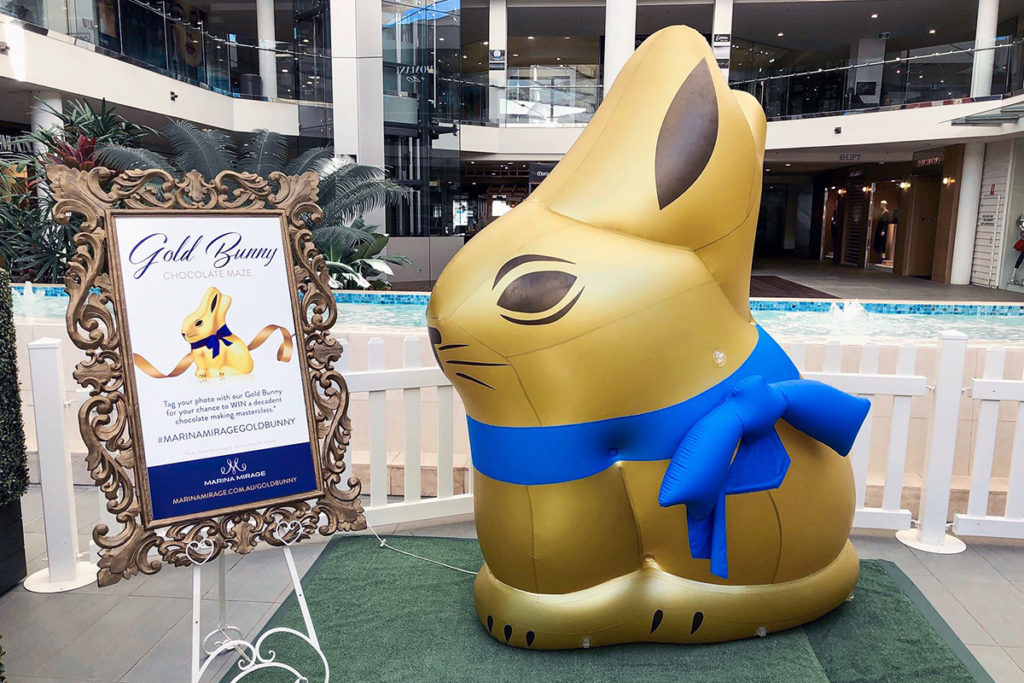 Marina Mirage is a well known and highly successful shopping centre located on the Gold Coast in Australia. Their marketing team contacted us with an idea of using a giant inflatable bunny for a maze activation inside their shopping centre for an upcoming Easter promotional event.

The brief was that they needed an inflatable product replica of a Lindt bunny that was to be set up inside their shopping centre for a whole month. This activation entailed having people walk through a maze, creating a sense of curiosity and fun. They were met with a giant gold bunny at the other end for social media posts and photo opportunities.

We are happy to have had a chance to work with them on this, and there’s no denying what the inflatable looks like (delicious)!

An Inflatable Product Replica of a Lindt Bunny

As with many of our projects, this custom printed inflatable was replicated based on a real life product.

We bought a Lindt rabbit from the supermarket and went to work on taking measurements and dimensions from it. This way, we are able to scale it up in our 3D design phase to get it as close to the real thing as possible.

An important aspect to replicate was actually the bow around the next of the rabbit, but there was a request to change it from the recognisable red ribbon to a blue ribbon which tied in better with the theme of the client’s activation.

Now that we had the measurements from the real life product, we were able to get to work on the 3D mock up, which is the first step in bringing the giant inflatable bunny to life.

Our 3D designer started to work on this project and after some time they were able to produce the below concept.

As there was no ambiguity on the shape of the inflatable bunny, it was clear what needed to be done from the very start. It was no surprise that this order was then quickly approved and went into production without hassle.

We have been manufacturing custom inflatables for over 15 years now and have extensive experience in producing a huge range of different types of inflatables, so we were confident we’d be able to meet the client’s expectations for this inflatable product replica.

Our team of craftsmen got to work in our warehouse and started to produce the custom printed inflatable as soon as the project was signed off on by the client.

We were able to complete this project in a few short weeks, having it ready well before the client’s use date of Easter.

After the manufacturing was complete, we moved to our quality control and review stage where the giant inflatable bunny was set up for a period of 3 days and tested for leaks and performance. Fortunately, there were no issues with the inflatable holding air for that period and it was therefore approved for shipping and prepared to send to the client.

Getting the Bow Right

The client was very specific in requiring a bow that had some volume to it.

The way we achieved this was by using the bow design and making a seperate inflatable section that was attached to the main body of the giant inflatable bunny to give it some 3D effect when set up.

Rather than just having a fabric that was going to drape around the neck, the bow was inflatable and gave the bunny extra definition, which is what the client wanted.

The Giant Inflatable Bunny in Action

Easter rolled around and the client set up the bunny at their maze activation.

The giant inflatable bunny was installed after we provided some over the phone support to the client to ensure that it was set up correctly, and safely.

After the month-long activation, the inflatable product replica was featured across all social media platforms and the client considered the whole activation a resounding success. They were very thankful to us for being able to produce this custom printed inflatable on time and on budget.

We love working on these types of projects, as there is an endless list of possibilities to get creative with. We get excited seeing our inflatables being used all over Australia at all kinds of events and activations. If you have a project of your own and are looking to include a custom printed inflatable, we’d love to discuss it with you.