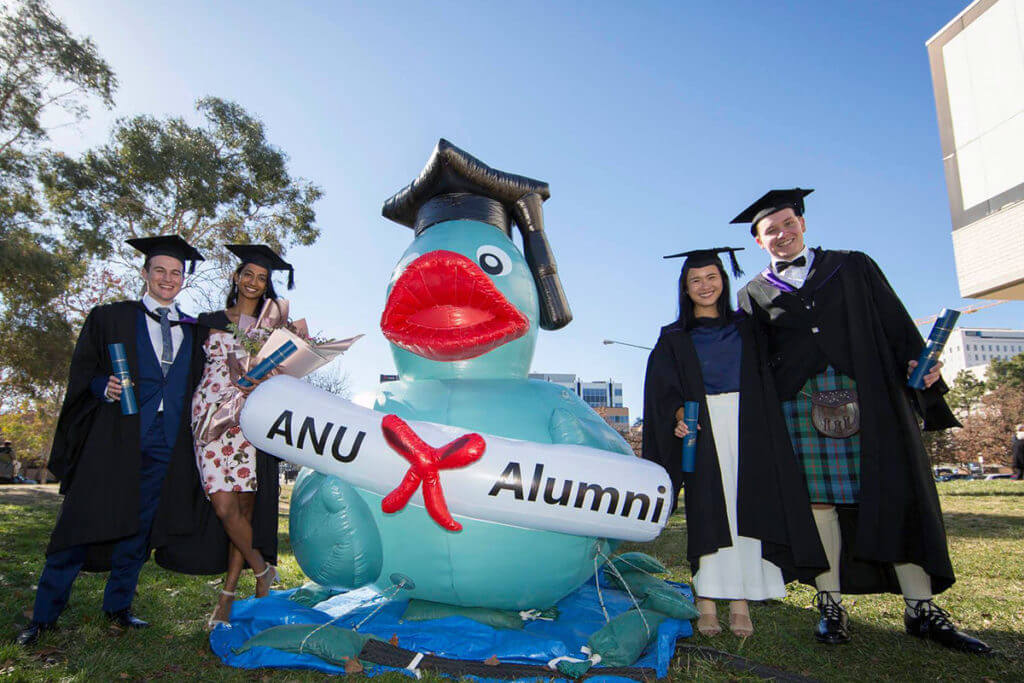 The Australian National University team contacted us looking for an inflatable rubber duck mascot, to compliment their blue duck mascot that is so unique and well recognised by their students and alumni.

Every year when students graduate, each of them receives a rubber duck as a commemorative gift and it’s something that’s cherished for a long time by all the outgoing students.

A fun idea they came up with was to create a giant inflatable duck replica for students to take photos with on their graduation days; not only to add a memorable element to the day, but also for something that can be posted on social media platforms to promote the university.

They contacted us to discuss the feasibility of this, and after some consultation we were able to get going on a project together. This was not the first time we had worked together, which helped us get things moving quickly.

Starting With an Inflatable Rubber Duck Mascot as a Base

Whenever we create a replica of a real item, we always request the clients to send us physical samples so that we can take measurements off those samples and then use them in the 3D modelling phase of the build.

In this case that was absolutely possible, and before we knew it, we had a little blue duck of our own.

The client, however, wanted to make some additions to the inflatable blue duck. One thing they wanted to add was the inclusion of some text on the scroll that more directly tied the duck to the alumni association.

Their request was to have the duck as is, but to add the words “ANU Alumni” to the scroll. This was not going to be an issue for us and we were aware of it during the design phase of the job.

All the measurements were straightforward and simple to take from the duck and all we had to do was scale them up to the finished size of the inflatable rubber duck mascot.

The final target size of the giant inflatable duck replica was 2.5m, but there is something peculiar to consider when it comes to inflatables. Even though a size is designed to that size, as the shape inflates there is a possibility that it will either be bigger or smaller than the target size. In most situations this is not a concern, as everyone understands why it happens, but it’s always something that we’re sure to mention to clients proceeding with projects.

The 3D design was knocked out by our team and we managed to replicate the duck in a CAD without much issue. The next step from here was to simply send it to the client and have them review the design, and approve it if they were happy with the proposed design. They were, so we were able to proceed to the next step: manufacturing the giant inflatable duck replica.

Construction of the Inflatable Blue Duck

Once the 3D design was completed and signed off on, the next part of the manufacturing is where to do our magic and turn what you see on the screen into reality.

The 3D object was exported into a cutting pattern and then it was time for our manufacturing team to begin putting the unit together.

Print samples were also created at the same time to ensure that the final colour would match the desired colour, and it did, which was great.

Our team managed to produce the inflatable blue duck well ahead of schedule and the unit was tested and checked for quality, after this point it was packed up for shipping and sent to the client.

The client received the inflatable rubber duck mascot well ahead of their first event date and it was ready to go on the big day!

Wow! What an impact. The duck was a hit with all the students and it achieved its original goal of creating photo opportunities and providing a memorable experience for their students.

We were over the moon to be able to work with ANU once again on another project and we think the giant inflatable duck replica turned out great. We couldn’t be happier with the result and we are excited that so many stories and memories will be made in front of this inflatable blue duck for many years to come!

If you are looking to produce a custom made inflatable mascot of your own, we would love to open up a world of new possibilities to you. We have made many inflatable mascots and replicas for businesses, schools, universities, and more across Australia. Contact us today to get the ball rolling on pricing and artwork!